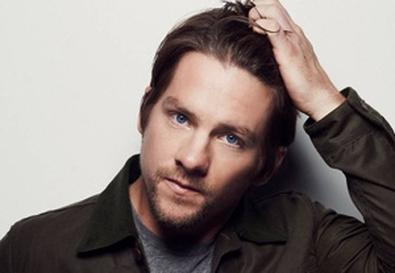 Photo Source: Brian Higbee
From being left at the altar to finding out he's one-sixteenth Navajo to becoming addicted to V-neck tees, Dave Rose has dealt with a lot during the past two seasons of ABC's comedy "Happy Endings." Although he sometimes seems like the straight man among zany characters, the actor who plays him, Zachary Knighton, has a different theory – that he's a "mash-up" of every character on the show. "He does some dumb things like Alex, he can be controlling and manic like James," says the 33-year old Virginia native. "It makes sense in my own head,"

Zachary Knighton: I got serious about it when I got accepted into a magnet high school for the performing arts. After high school, I went to VCU and got a BFA in theater. I got to do a bunch of stuff professionally throughout college. I actually got my SAG card in college. I got cast in a PBS movie of the week called "Sally Hemmings: An American Scandal" with Sam Neill as Thomas Jefferson. Virginia's a right to work state, so you don't have to get your SAG card, but I just decided to go for it so I could be prepared when I moved to New York. Oddly enough, going to school in Virginia instead of New York or L.A. helped me way more in getting my career started.

Back Stage: Tell me about getting your first sitcom, "Life on a Stick."

Knighton: I moved to New York after college and was doing theater and bartending for six years. I got flown out to test [for "Life on a Stick"] and ended up getting the lead role. It was a huge deal, but then I quickly got the taste of failure when it was promptly canceled. But that prepared me for the next eight pilot seasons.

Back Stage: What was your experience on "FlashForward" like?

Knighton: "FlashForward" was a dream come true. I had auditioned for David Goyer for "Blade: Trinity" and didn't get the part, but I guess he became a fan. I originally went in for John Cho's part in "FlashForward" because my character was supposed to be an old man. David Goyer actually changed the role so I could play [Dr. Bryce Varley], which was awesome. It was the first time I had anybody champion me. It was a great experience, and we all thought we were making something pretty special. Of course, it was really disappointing when it got canceled, but it's all part of Hollywood.

Back Stage: And you probably couldn't have gotten the part in "Happy Endings" if "FlashForward" hadn't been canceled, right?

Knighton: It was pretty wild. "FlashForward" was on the outs when I was approached with "Happy Endings." I literally got the script on a Friday, and on Saturday morning I met with David Caspe, Jamie Tarses, and the Russo brothers. I took the role on that Saturday and on Monday I was doing a table read. It all happened very fast but it was super exciting. I was the last one on board. Everybody had been cast for months. I shot the pilot in between shooting the last two episodes of "FlashForward."

Back Stage: "Happy Endings" is such a great ensemble cast. Was the chemistry there right away at that table read?

Knighton: We did have pretty good chemistry. We all liked each other right off the bat. Everybody's so funny and constantly improvising and having fun. The best thing about our set is it's a very safe place for us actors to play. Everyone is supportive and given a chance to shine, so that makes it a great place to work. I think it really reads on camera, when you see the show, that we all really do have a mutual respect and we have fun working with each other.

Back Stage: Will you be filming anything over your hiatus?

Knighton: I've been working pretty steadily since before "FlashForward," so I feel like I would like to take a little break over the summer. But I also know that in this business you shouldn't take a break, so we'll see. I've been personally working really hard since I finished college, 13 years now. At one point, I was in a place where it didn't feel like it was going to happen and I was feeling pretty down on myself. But I stuck to it, and now I have a hit comedy on my hands. You've got to keep plugging away at it. If you really believe in yourself, you can definitely make it happen.