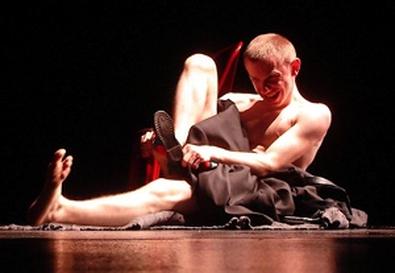 Photo Source: Aleksandr Paskannoi
The political aspect of the title subject's dramatic work is the focus of "Being Harold Pinter," a brief program presented by the Belarus Free Theatre as part of the Public Theater's Under the Radar festival. Staged in an intimate space at La MaMa ETC, the 75-minute work stitches together scenes from the late playwright's oeuvre with excerpts from his 2005 Nobel Prize acceptance speech and letters from Belarusian dissidents. The seven-member company speaks in Russian while English supertitles are projected on a screen, which hangs above a huge close-up of Pinter's eyes. The author's famous pauses are forsaken for moments of menace, mostly involving torture. Director-adapter Vladimir Scherban begins with an actor playing Pinter delivering his Nobel speech, explaining how he develops his characters and the difference between artistic and political truths. Pinter says that in most of his nonpolitical plays, something can be true and false at the same time, but that in political theater such ambiguity is counterproductive and objectivity is essential.

To illustrate the point, Scherban segues into scenes from "The Homecoming" and "Old Times," with the characters clashing over their differing perceptions of reality and memory, as Pinter comments on how he developed the plays' structures and the characters' enigmatic relationships. The remainder of the piece is taken up with overtly political depictions of tyrannical regimes physically abusing free-thinking prisoners, including segments from "One for the Road," "Ashes to Ashes," and "The New World Order," and the entire 20-minute text of "Mountain Language." The cast then coolly reads missives from real-life Belarusian citizens protesting their oppressive government and detailing the horrifying treatment they receive as a result of their protests.

The effect is initially chilling, but there is too much of the same thing. It's terrifying to witness these brutal assaults, especially after reading the company members' bios, which include the number of times they've been arrested for political activities. As recently as Dec. 9 and 10, 2010, Minsk, the Belarusian capital, erupted in protest over the latest national elections, and there were mass arrests. In order to get to the festival, some cast members had to hide in trunks and cars to avoid government detection.

One has to admire the actors for their dedication and courage. Unfortunately, the offstage story is more gripping than the onstage one. The torture scenes lose their impact due to repetition and lack of dramatic context. The most effective moments are surprising departures from the torture pattern, as when the actors casually drop four apples onto the floor and then suddenly smash them, or when a government official amuses a little boy (played by an adult actor) with a paper airplane, only to drive it into the top of his head. Most intense of all is the reading of the letters. The company members face front, hold flashlights under their chins, and calmly read the descriptions of protests, arrests, and appalling treatment in prison. This simple, objective re-creation of a terrifying reality makes for powerful political theater.