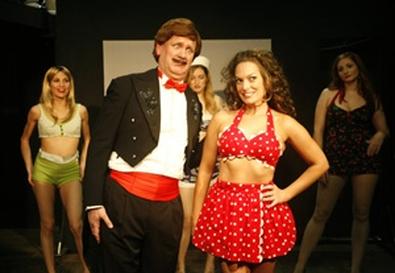 Writer-composer-lyricist Kevin Fry wrote this raucous spoof of old horror flicks, loosely based on the 1962 B-movie "The Brain That Wouldn't Die." The protagonist is slightly mad scientist and would-be Dr. Frankenstein Bill Cortner (Charles St. Michael), whose taste for unorthodox medical experiments has led him to create a Creature (the shaved-headed and richly tattooed Chance Havens) so violent he must be confined to a cell.

Fry's songs are more serviceable than brilliant, and the piece is most successful when it sends up the tired horror movie conventions. Director L. Flint Esquerra makes the most of his opportunities, keeping the action lively and raunchy. St. Michael acts with abandon to provide an agreeably over-the-top performance. Saunders, as the indestructible head, demonstrates strong vocal chops, even when deprived of her body. Pinckney scores steady laughs as the frustrated Kurt, who's nursing a secret crush on Cortner. Battoe is a winsome and charming Jeannie, and her choreography almost bursts the bonds of the tiny space. Faith's Seductra is brassy and exhibitionistic, as she sings a song urging the audience to look at her rack. Bates is a sultry Doris, despite her fidelity to her (offstage) lesbian girlfriend. And Havens rampages enthusiastically as the uncouth Creature, who can be tamed only by a Ken doll.

Robert Shaw provides crisp musical direction, while Paul Koslo's clever, uncluttered set makes the most of the small venue, assisted by Alicia Ziff's atmospheric lighting. Prim souls may be disconcerted by the relentless vulgarity, but at the performance attended, an enthusiastic audience was eating it up.