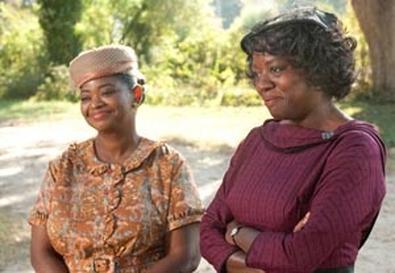 Photo Source: DreamWorks
Tate Taylor has assembled a killer cast for the genuinely moving screen adaptation of Kathryn Stockett's bestseller "The Help." With a killer cast including Viola Davis, Octavia Spencer, Emma Stone, Allison Janney, Bryce Dallas Howard, Jessica Chastain, Sissy Spacek, and Cicely Tyson, DreamWorks' screen version of the novel proves girl power is alive and well in Hollywood—or at least Mississippi, where Taylor filmed the civil rights–era comedy-drama. On the surface, this would hardly sound like the kind of stuff major studios are interested in making these days, and with an unknown director. But the Southern roots and charm of the film win the day in a funny, touching, and inspiring scenario with some of the finest acting you will ever see.

The effervescent Stone, ever maturing as a force to be reckoned with, plays Skeeter, a recent Ole Miss grad in the 1960s who wants a career as a writer rather than as a trophy wife, and sets about chronicling the lives of "the help," the black maids who brought up white children of well-to-do families, just as if the children were their own. Of course, she needs to keep the project a secret and gets it going by enlisting the help of a friend's maid, Aibileen (Davis), who very reluctantly agrees to participate and becomes the catalyst for a number of others to follow suit. This group includes the lively and opinionated Minny (Spencer), whose reputation as "the best cook in Mississippi" precedes her and leads to the movie's most outrageous and hilarious scene. The film, like the book, chronicles the individual stories between these hard-working women and the Southern belles they must endure—the latter including a villain in the form of Minny's first employer, Hilly Holbrook, a self-centered, self-righteous bitch if ever there was one. As played by Howard, Hilly easily could have dissolved into caricature but is saved by the three-dimensional work of this fine actor. We may hate her, but in Howard's hands, at least we understand where she's coming from. There's also marvelous work from Minny's second employer, the free-spirited if flighty Celia Foote (Chastain), a sad figure left alone in a big mansion who is befriended by Minny. Chastain is pure delight here.

Although "The Help" is largely an ensemble piece, the arc of the story is driven by Stone and Davis, who again proves here she has few peers when it comes to getting to the emotional heart of the character. She is the film's center, and it soars because of her realistic portrayal of a dedicated working woman in the racially charged South of the '60s who also must hide her own heartbreak over the untimely death of her son. Spencer, though, manages to steal every scene she's in. Spacek is a complete delight as Hilly's more progressive mother, and Janney, as Skeeter's ill mother, completely wins us over once she sees the error of her ways.

As a story of change, "The Help" shows change takes small steps, but the film does so unforgettably.