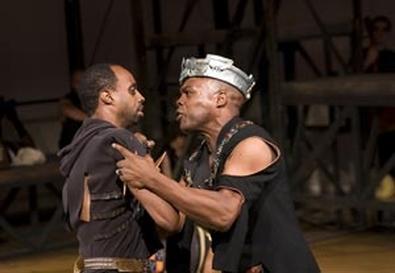 Photo Source: Ruth Sovronsky
After a hiatus of nearly two years, the 12-year-old, award-winning Classical Theatre of Harlem is back in the game with a high-octane, wonderfully entertaining production of "Henry V." A 15-member cast brings to rambunctious life Shakespeare's tale of the youthful king who in the 15th century brought unparalleled glory to England on the battlefields of France. Ty Jones, now the organization's producing director, takes on the title role and delivers a splendidly spoken, multilayered portrait of a brilliant leader graced with innate intelligence that can give way to warlike ferocity as well as inform his genius for inspiring his subjects. And when required, as in his courting of the French Princess Katherine, he can vibrate with romantic charm.

Director Jenny Bennett helms the proceedings with bold theatrical savvy. Her stylized depictions of the battles of Harfleur and Agincourt are models of well-conceived economic staging. She uses the wide-open playing space, bordered on three sides by the audience, almost like a gymnasium, which her actors inhabit with athletic prowess. Most of them take on multiple roles, switching characterizations without missing a beat, giving both language and action their due.

Particularly notable are the comic turns by Carine Montbertrand as the nattering Archbishop of Canterbury, the rascally soldier Nym, and the giddy Alice, attendant to Princess Katherine. In contrast are the gravitas lent the French king by Stephanie Berry and the affecting anti-war sentiments expressed by Paulo Quiros as Michael Williams, a soldier caught up unknowingly in a debate with the disguised Henry. There are also solid contributions from Glenn Gordon as Pistol, Lelund Durond as Bardolph, and Warren Jackson as Fluellen, although the Caribbean dialect Jackson adopts for the Welsh captain is a bit jarring. The plum role of the Chorus is smartly divvied up among the company.

In the rush to get through the abbreviated yet still hefty text within the 90 minutes promised by the program (not quite achieved at the performance reviewed), the thread of storytelling sometimes gets lost. The play's panoramic sweep and crowded cast of characters are probably as much to blame as anything. Yet the production never loses its hold on the audience, from the moment the cast enters for about 10 minutes of warm-up exercises to the final words of the Chorus. Watching the show is like being courtside at a great basketball game. And the big plus is that you get to hear some of Shakespeare's most exhilarating language as well.