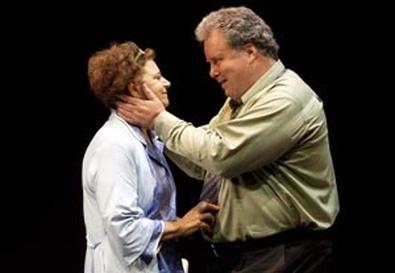 Herman Kline is a victim of habit. As the head of trauma at Mt. Sinai Hospital, he finds a midnight stab victim as quotidian as his Tuesday chili lunch. He and his jabber-mouthed wife, Liz, live in a newly empty nest, and Liz fills her time being leery of her husband and sharing her suspicions with her friend's premed daughter, Lauren Axelrod, at drop-in "therapy sessions." Liz isn't the only interruption to her studying that Lauren endures. Her screwup drug-dealing ex-boyfriend, Ernie Santos, who's in a bit of a financial bind, drops by to hide and seek help.

Koenigsberg creates sympathetic characters with rich backstories, but their interactions feel forced. The play's coincidences are too perfect, and though I sympathized with Herman's need to feel alive while facing a potential health issue of his own, heavy subject matter like stolen drugs and alleged affairs can't make the drama whole.

Part of what strains the connections between scenes is the changing of Anne Allen Goelz's simple yet attractive set. Moving the furniture interrupts the dramatic flow, and these long blackouts make the pieces feel separate. When the final blackout occurs, it almost feels as if another scene should follow, as the action is hardly resolved.

The show belongs to Kathryn Kates, who taps into Liz's deep paranoia and restlessness with ease. As the character excuses her need to have therapy sessions with a 21-year-old student, she rants about porn and desirability with a humorous and heartbreaking rag on what she calls her "60-year-old ass." Kates' comic timing turns a touching scene into a laughing moment, and she gets the audience on this troubled and sometimes annoying woman's side. Adam LeFevre walks around like a droopy-eyed puppy dog as Herman, and though LeFevre evokes sadness, his performance is mostly depressing. Mary Quick's work as Lauren is the most unremarkable, as the character is more of a dramatic device than a full-fledged individual. Bobby Moreno plays a stereotype as Ernie, but he finds relatable qualities in his character's clichéd nature and makes the final scene, between Ernie and Herman, touching.

Barber's sympathetic and crisp direction keeps the play moving despite its lagging moments. Ultimately, though, Koenigsberg's crisis is too predictable and lacks a satisfying conclusion.