Hillary: A Modern Greek Tragedy with a (Somewhat) Happy Ending 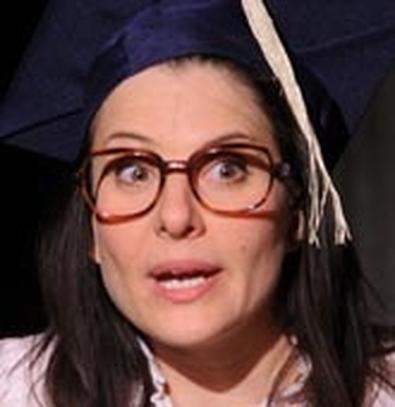 No story is played out if it's played right. Despite two years of having Ms. Rodham Clinton shoved in our faces at all times, Wendy Weiner's Mount Olympus spin on Hillary is cringingly, groaningly fantastic.

The familiar tale of boundless promise, ambition, and self-delusion becomes full-out amphitheatre material, complete with togas, chorus, and ominous ravens that fall from the sky bearing such gifts as The Washington Post and a subpoena. The tragic heroine's plight is framed within a battle between Aphrodite (Victoire Charles), goddess of love and beauty, and Athena (Heidi Armbruster), goddess of "wisdom, victory — and olives," each of whom wants to counsel the budding leader while proving superior to the other.

As we know, no one wins, but reliving Hillary's days on the high school debate team, her wild side (she gets shushed by a librarian), and even Monica proves surprisingly enticing. Side plots involving heart surgery for Hillary and a quest by Bill to revisit magical hot springs are blatantly silly. But under Julie Kramer's sharp direction, Mia Barron and Darren Pettie give performances that are constantly funny and just sympathetic enough. They get their necessary caricature points too: Barron's bug-eyed, superstiff, coxswainish delivery of her healthcare speech has to top all else, but Pettie's boyish drawl and incessant tongue wagging are almost as much fun to watch. The chorus excels in the imitation department as well, doubling as Bill's fan club, Kenneth Starr, and Hillary's unimpressed father, among others.

Yet there's more than just laughs. To Weiner's credit, tragic flaws, an epic journey, and a kind of catharsis manage to come through. This is a lot for one production, but not necessarily too much: Hillary could use an intermission, though it runs just under two hours. If only the campaign had been so succinct.