I Have Been to Hiroshima Mon Amour 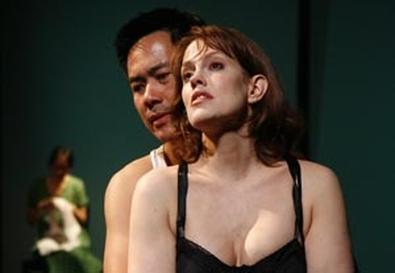 Chiori Miyagawa's play should be required viewing for all anti–nuclear proliferation advocates. Not because it would fire them up—you must already be impassioned if you're aiming to stop the spread of nuclear weapons—but because the play makes brittle poetry of unimaginable horror.

The title, I Have Been to Hiroshima Mon Amour, appropriates the title of a 1959 Alain Resnais film notable for its use of flashbacks, reflecting the narrative leaps of the play itself. In homage to Resnais, Miyagawa presents two characters: a French actor (Juliana Francis-Kelly), in Hiroshima in 1959 to make a film and holding back secrets about her past, and a Japanese architect (Joel de la Fuente), a Hiroshima native who was away in the military when the A-bomb decimated his city. Their love story is interwoven with that of an ethereal woman (Sue Jean Kim), another Hiroshima native, who died in the initial moments of the blast. Speaking to each other or to no one in particular, these characters talk often of first loves and loves lost, who is entitled to history, who is the guardian of memory.

Then there are scenes, like respites, that feature all three actors playing present-day American friends. They nibble on chips, debate Resnais' ethics, and burst with social conscientiousness, yet they are all at a clear remove from the visceral impact of the bomb. The immensity of its destruction is clarified by the dead Japanese woman, who metes out enough facts to steal our grainy, black-and-white collective image of a mushroom cloud and replace it with human faces.

Miyagawa's goal isn't to re-inflict old wounds—World War II was hastened to a close, historians say, by President Truman's decision to nuke Hiroshima and Nagasaki. Rather, it's to replace Resnais' romanticizing of mushroom clouds with newer, more complex metaphorical arrangements. For Hiroshima is not just one story among many; it's the story of our age.

She also creates especially well observed characters—you might detect slivers of yourself in the performances, none of which hits false notes. No doubt the actors were nurtured by Jean Wagner's staging, which is pretty as a lilac, and by Hillary Spector's choreographic diversions.

Being inspired by a film, the play naturally has a filmic quality. Screens, those most typical of Japanese objects, are used by set designer Glenn Reed not only to focus the playing area but also to frame Hap Tivey's projections, amplify Rick Martin's soft lighting, and allow Du Yun's music and sound design to envelop us with peace, if not always love.