'Hit the Wall' Sentimentalizes the Myth of Stonewall 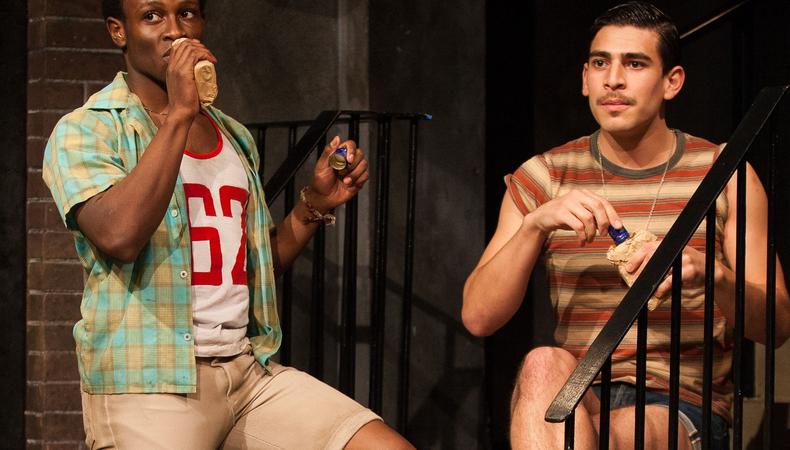 There’s no doubt that Ike Holter’s “Hit the Wall,” an attempt to dramatize the Stonewall Riots, which are generally considered the birth of the modern gay rights movement, means well. Unfortunately, that’s not enough. Holter’s cavalier attitude toward historical accuracy gets too many things wrong about what the world was like for LGBT people in 1969, while his flat fictional characters are notable chiefly for their undifferentiated melodramatic rage. As a result, “Hit the Wall” ends up a sentimental and misleading theatricalization of myth, not history. Worse, it wallows in its characters’ victimization rather than celebrating the fact that for the first time gay people stood up, fought back, and seized power.

Holter’s script follows the adventures of eight gay or lesbian people on the day of the riots. African-American Mika and Puerto Rican Tano are known as the “Snap Queen Team” and hold court on a Greenwich Village stoop, judging the passersby. Newbie, a pretty, callow suburban youth, arrives on the scene early and is eager to lose his virginity, which he finally does with A-Gay, a narcissistic straight-acting top who’s a Harvard grad. Fierce black cross-dresser Carson is mourning her idol, Judy Garland, who died that day, and Cliff, a stoner drifter avoiding the draft, falls for her. Peg is a butch lesbian who is fed up with her family’s attempts to feminize her. Roberta, a well-educated, highly political black lesbian, has hit the streets to proselytize for her new organization, WILD (Women Internationally Learning Divisiveness). Also around are Madeline, Peg’s obnoxious straight sister, who has a ridiculously coincidental run-in with Carson on the Upper East Side; Alex McArthur, a bigoted and violent policeman; and three hippie rock musicians busking for cash.

Director Eric Hoff’s awkward in-the-round staging fails to suggest one of the most basic facts of the riot: The police were trapped inside the bar by the angry crowd. A kick line of drag queens singing “We are the Stonewall girls” happened outside in the street as a taunt to authorities, not within before the raid occurred. Nor can Hoff successfully present the melee; as Dan Lipton’s rock music blares loudly, all these gay characters are suddenly fighting each other as strobe lights flash. Really? The heavy emphasis on Garland’s death ignores what veterans of the event and authorities who have researched it repeatedly say: Those who led the fight were the most marginalized—drag queens, homeless kids—and Garland was simply not on their radar.

The actors commit fully to the endeavor, but there is little they can do with the stereotypical writing. Nathan Lee Graham fares best, as Carson, the only performer who manages to suggest a convincing inner life for his character. As Mika and Tano, Gregory Haney and Arturo Soria handle their put-downs well, though Holter’s language is too contemporary, and Carolyn Michelle Smith brings a vivid boisterousness to Roberta. Hoff eventually pushes almost everyone into embarrassing histrionics.

Throughout “Hit the Wall” the characters repeatedly intone “I was there.” It’s painfully obvious Holter wasn’t.