Hoboken to Hollywood: A Journey Through the Great American Songbook 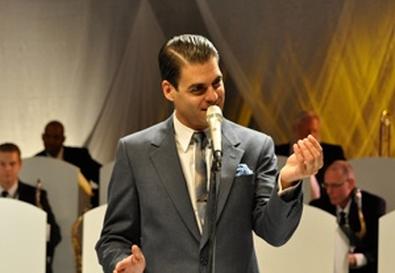 There's a hint of "Louis & Keely Live at the Sahara" and a touch of "Judy's Scary Little Christmas" in this exhilarating new jukebox musical, set in an NBC TV studio during the fictional taping of a mid-1960s network special, spotlighting one of the hottest male singing stars of the era. Director Jeremy Aldridge, who helmed "Louis & Keely," penned the skeletal book for this charming new tuner, in collaboration with actor-singer Luca Ellis and music director Paul Litteral. What drives this richly atmospheric concoction is Ellis' smashing star turn, as this gifted performer channels Frank Sinatra. The star attraction on the TV show is identified only as "The Crooner" from Hoboken, but the character is unmistakably intended as a tribute to the beloved superstar.

As Ellis suavely makes his way through the greatest-hits score (including "Bye Bye Blackbird," "Young at Heart," and "Blue Moon"), he brings to mind the sexy, dreamy style that Sinatra was known for, highlighted by inspired phrasing and impeccable musicianship. Yet the swoon-inducing Ellis wisely stops short of an all-out impersonation, inserting stylistic touches and a personality that are clearly his own, whetting one's appetite for seeing him in other choice musical roles.