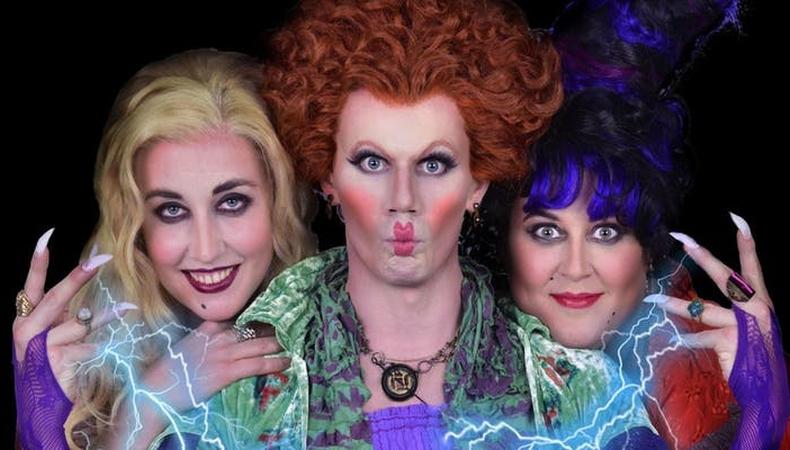 The Sanderson “Sisters” rise again.
It’s (almost) Halloween, which means it’s time once again to revisit one of the arguable greatest films of the season: “Hocus Pocus.” But additionally this year, you can get up close and personal with the Sanderson Sisters in the flesh at “I Put a Spell on You: The Return of the Sanderson Sisters.” Jay Armstrong Johnson brings his musicalized show and motley crew to (Le) Poisson Rouge on Oct. 28 for a night of spooky songs, costumes, and the expected amount of debauchery. Come in costume or risk ridicule. (Tickets start at $20)

Bow down to the Halloween screen queen.
Speaking of Halloween queens, Jamie Lee Curtis is currently back in movie theaters with “Halloween,” the 2018 addition to the massively successful franchise, but we shouldn’t forget about the actor’s other spooky classic, “The Fog.” Metrograph invites you to experience the 1980 John Carpenter flick on the big screen, with late-night screenings every evening leading up to and on Halloween—and be sure to bring a buddy for hand-holding needs. ($15)

Have your Shake and eat it, too.
Because Shakespeare is obviously best enjoyed with food and drink, you shouldn’t miss the Shake and Bake production of “Love’s Labour’s Lost.” On sale through Jan. 4, 2019 at 94 Gansevoort in the Meatpacking District, this immersive production of the Bard’s comedy also provides an eight-course tasting menu and drinks, all of which are fully integrated into the ensuing story. (Tickets start at $75)

Put your money where your mouth is.
Have some LOLs for a very good cause at the Bell House on Oct. 28, where a number of your favorite comedians will perform to benefit the Trayvon Martin Foundation. Hosted by Michael Che (“Saturday Night Live”), the evening will also feature Jon Glaser, Jon Benjamin, Maeve Higgins, and others, with all proceeds going towards the organization fighting to end gun violence. The show is currently sold out, but keep checking back in the days prior in case more tickets are released—and regardless, do check out the Trayvon Martin Foundation, and donate if you can. (Tickets start at $35)

Have a 4-for-1 musical experience.
You’ve heard that it takes years and years to develop a musical, so what happens when you have just 24 hours to put on a show? Find out at this year’s “The 24 Hour Musicals on Broadway.” The Oct. 29 event at Broadway’s American Airlines Theatre will see top-tier creative and acting talent come together to stage four musicals, each of which has been written and rehearsed in the single day prior. Slated to take part are John Mulaney, Jasmine Cephas Jones, Patti Murin, Bebe Neuwirth, Lea DeLaria, Savion Glover, Norm Lewis, Kate Rockwell, Corey Cott, and many others. (Tickets start at $175)

Casey Mink
Casey Mink is the senior staff writer at Backstage. When she's not writing about television, film, or theater, she is definitely somewhere watching it.
END_OF_DOCUMENT_TOKEN_TO_BE_REPLACED