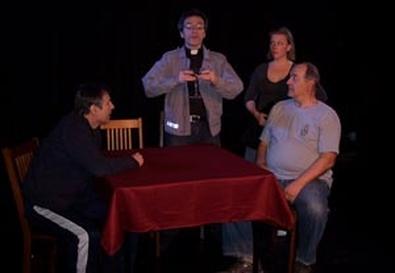 Photo Source: Jessica Pecharsky
Joe Lauinger has written a perfectly fine, realistic and resonant, organically funny and touching one-act play. In his subjects, the four Italian-American DiCamillo brothers, Lauinger has created characters about as different as a quartet of men from the same two parents could be. Thanks to first-rate performances by each of the four actors playing the brothers, under the sure direction of Sue Glausen, we in the audience can directly relate to some of them and find the humor and pathos in all of them.

The setup is simple enough: The four brothers agree to meet for a meal at their favorite old-neighborhood restaurant in a New York suburb. The eldest, Vic (played by Paul Montagna), is an overindulging blowhard misogynist who inherited the family business and measures life success mostly by money and possessions. His polar opposite, the baby of family, is the estranged Bernie (Dono Cunningham), a lawyer who is tremendously health conscious, married outside the family's Catholic faith, and works as a public defender by choice. The middle brothers are Patsy (Jerry Ferris), a parochial-school athletic coach who is having an affair with a 15-year-old student and whose marriage was already on the rocks, and Tommy (John Blaylock), a terminally alcoholic priest who has been banished by his archbishop to a diocese-run nursing home, the Holy Child of the title. The latter transition is the chief topic of the brothers' meeting. Their ever-shifting revelations and recriminations are interrupted only by their tart-tongued, opinionated waitress (an equally splendid Annie Paul) and ended only by a somewhat predictable tragedy.

Unfortunately, this is not a one-act bill. Lauinger, presumably to fill out the program, has tacked on a second act that seems at times to have been written by someone else—and in a hell of a hurry. In this second piece, the seamless naturalism of the one-scene, real-time first act has been replaced by six quick-cut skits of the absurdist persuasion, with an overlay of the supernatural. The DiCamillo brothers are all in evidence, played by the same actors, but Paul now plays, in addition to the waitress, five additional characters—including the Virgin Mary, an opinionated GPS device, and an old-school ruler-wielding nun. Two of the 10 characters are dead throughout Act 2, not counting the Virgin Mary. The actors and Glausen can't begin to save this playwriting misstep, which completely undercuts the promise of the first half of the bill.