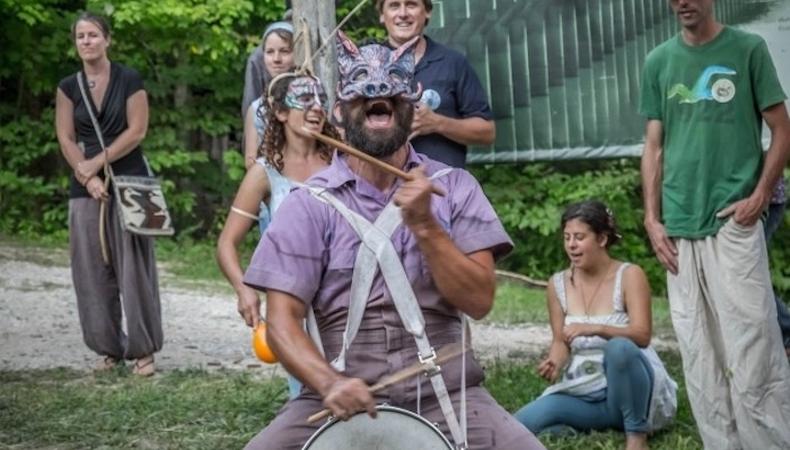 New York, Chicago, and Los Angeles are considered the epicenters for American actors. But what about all of the work happening underneath and in between? When the Regional Theater Movement took off in the 1960s, the intent was to keep American acting from being defined by a few flashy blocks in New York or some studios in L.A. Aligned with the anti-establishment tone of the times, regional theater strived for artists to be successfully rooted around the country.

Where does that mission stand now? Where are the innovative theaters that are not in the expected centers, but are thriving on the outside?

Let’s start with Mondo Bizarro of New Orleans. Nick Slie, Mondo’s co-founder and co-artistic director and a native of the city, has been working since 2002 to create work that intersects between the performative, environmental, and civically-engaged. Mondo uses physical practice to defy the cerebral tendencies of theater-making and explore, as Slie describes, “the landscape of the body, heart, and mind.”

The four core artists of Mondo Bizarro have created a devising and rehearsing structure that gestates work over a long period of time. Instead of burying stories after they’re performed, Mondo aims to create a body of work which, Slie says, “would last throughout our careers.”

READ: 7 Ways to Create Your Own Work

The work is a response to their city, “New Orleans embodies all of the things that are important to our work...I live in my spiritual, ancestral, artistic home.”

Mondo Bizarro’s recent, nationally acclaimed co-production with ArtSpot Productions, “Cry You One,” is a piece confronting coastal land and culture loss in Louisiana. It is praised for its innovative use of procession, nature, and live music. Slie reminds fans that the production’s distinctions aren’t necessarily the product of theatrical innovation but an attentiveness to longstanding traditions of the region—an authentic “mirror up to nature.”

Catapult, Mondo’s lab, is in a small converted warehouse a mere block from the Mississippi River. It’s not unusual to hear a foghorn at night or feel the breeze of warm river air during the day. The space, which they share with other arts companies, allows Mondo to experiment freely without restraint.

But these artists’ commitment to their home is not prohibitive. Mondo travels throughout the country in an attempt to always be nationally-engaged, bringing its work far and wide to connect the heartbeat they feel in New Orleans with the pulse of different locations. Slie acknowledges there’s also a financial strategy to traveling: Their work outside of New Orleans helps to subsidize their committed research and actor training on the ground, especially in a region that is deprived of dedicated theater funding.

At a time when the American voice seems increasingly dissonant, Mondo Bizarro has created a pathway that allows for a canon that sustains itself indefinitely based on the glimpse of America it observes and invests in. “I do not often align with the theater with a ‘capital T’–which I think of as the institution of Theater,” says Slie, “but I very much align with theater with a ‘little t’ which is the definition of theater, ‘the witnessing space.’ I look around the world and I see the witnessing space as being very much alive.”

Consider where your opportunities are to break up with the perceived path of theater-making and to innovate homegrown art in service to the world you live in or wish to live in. Nina Vance, pioneer of the iconic Alley theater in Houston famously said, “I clawed this theater out of the ground.” Mondo Bizarro makes us think: Where is our ground?

Alex Ates is a director, actor, and educator rooted in New Orleans, Louisiana. He is the education and engagement director of The NOLA Project and is a network chair with The American Alliance for Theatre and Education. He has directed five regional premieres with The NOLA Project and co-created and directed "The Shakespearean Jazz Show." Alex has been a featured actor with The New Orleans Shakespeare Festival since 2010 and is a member of Actors’ Equity Association. His writing has been published in Howlround. Alex has spent the past three years on the Theater faculty at Lusher School. In the fall, he will be attending the University of Alabama as the only person selected into their MFA Directing program, serving as a Graduate Teaching Assistant. In 2013, Alex received his undergraduate Acting and Directing degree from Emerson College. Learn more at iAmAlexAtes.com.