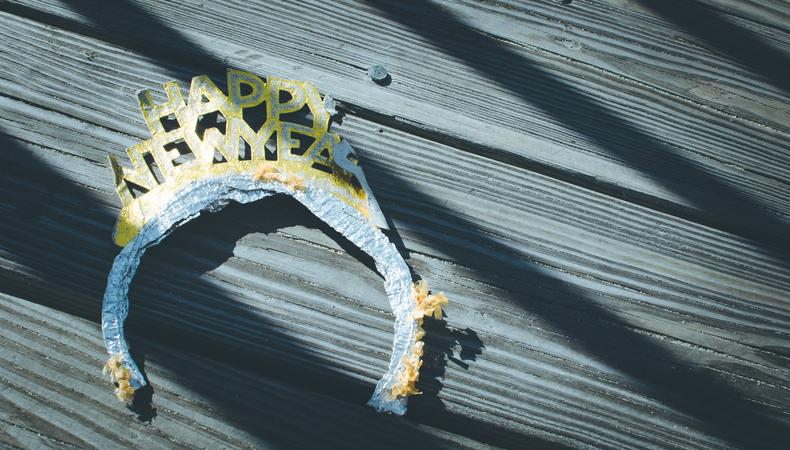 It is common knowledge that most New Year’s resolutions fail. Gyms, in particular, bank on the fact that the burst of energy and resolve you feel on Jan. 1 of each year is merely a passing phase. You buy the yearly pass, run on the treadmill once, attend two or three pure barre or yoga classes, and then just never make it back.

But it’s not your fault. You haven’t decided to change your life, you’ve just been told you should.

I’ve always maintained that the best time to make resolutions is not the new year, but whenever they occur to you. The worst part about failing at resolutions isn’t that you keep eating junk food and sitting on the couch all day, because you’ve been doing that all year anyway. It’s that you lose faith in your ability to change your life in the future. It feels as though you’d be better off with no resolutions than resolutions at which you’ve repeatedly failed. At least then you wouldn’t feel like a failure.

So here’s my crazy suggestion: Make some end-of-year resolutions instead, and make them structural rather than superficial. That way you only have to keep them up for a couple of weeks to actually succeed, and they will form the basis of good habits for the beginning of the new year. And who knows, perhaps by then, you’ll have given yourself enough momentum to actually carry on with them with minimal effort!

1. Show gratitude.
I’ve long since accepted that I will never receive a tip in this industry if I help you land a great gig, even though the guy who took the lid off your beer will. That’s cool. The odd thank you and public recommendation though is incredibly gratifying. Start showing gratitude today. Thank your teacher, thank your agent, thank your friends and family, thank everyone who has helped you in some way this year. No one gets to the top alone, but many at the top are alone because they think their success happened in a vacuum. Don’t be the lonely top dog who realizes too late that they’ve bitten every hand that fed them along the way. Hashtag #gratitude to those who have helped you get where you are today.

2. Be honest.
If you can’t (or don’t want to) catch up with someone, then don’t. Don’t promise to catch up and give them the runaround for weeks by making excuses. This industry tends to fear what people will think, and so it lies. Worried about what people will think if you don’t say “Let’s catch up?” Then you should be very concerned what people will think about you saying it and then consistently letting them down. In truth though, as David Foster Wallace said, “You will become a lot less concerned of what people think of you when you realize how seldom they do.” Say “nice to meet you,” and leave it at that. Say “let’s do lunch,” and spend an eternity needing to craft escalating and complex excuses to avoid fulfilling your promise.

3. Keep it personal.
In the past week or so I have received countless group e-cards for Christmas on LinkedIn. Does anyone honestly expect though that these “greetings” will build a relationship with me? If yes, they are wrong. If not, they are spam. Be genuine. It’s so easy, and so impressive. If you want to make a connection with somebody, write something personal. One person at a time. Take a second to check out their website and say something nice about that. Of the thousands of people who “reach out” to me on social media each year, a teeny tiny percentage do so with a personal touch. The personal touch always impresses. If you expect to be hired as a real person in the real world then be real in your interactions. Be you. It’s not that hard, after all, you’ve spent your life researching the role.

4. Burn bridges.
We’re told to never burn bridges, but that’s poor advice. I’d also like to keep my leg, but if the gangrene is spreading and threatening to kill me, I’m going to cut it off. Lop off limbs, burn bridges, jettison the escape pod, and destroy the mothership! Whatever you need to do to survive. And do it now, before the new year begins. We all have “bridges” to burn, be they safe old relationships, cozy and reliable jobs, or lovely but ineffectual agents and managers. They are the apron strings keeping us perpetually tied to where we no longer wish to be. And I don’t mean create nasty breakups; you must always be professional, but quit the middle-of-the-road job, sever ties with that old flame, and dump that over-talking, under-performing agent. Sometimes the only way to ensure you can move forward is to eliminate the temptation to go back. Stop hoping to find happiness in exactly the place it deserted you. Burn, baby, burn!

5. Keep it to yourself.
Not everything in your life should be shared, and not everyone you meet should be your friend. Make the pledge now to stop saying things on social media that people don’t need to hear, and stop adding people to your networks that you wouldn’t invite to dinner. Don’t be fooled by the followers that celebrities have on social media. Pay attention to how many they follow. Ricky Gervais has over 7.5 million followers on Twitter, and yet personally follows less than 800. People follow Gervais because they know there is more to his life than he is posting about on Twitter or Instagram, but most actors post far more than actually happens in their life in the hope it will seem impressive. Stick to the maxim: Don’t draw attention to what you don’t have. Stop posting about what you’re eating, and “being on your way to set,” and start actually working so much that people have to wonder what you’re up to.

6. Go away.
Disappear. I mean it. Not necessarily to Nepal, but slip under the radar for a while. See if anyone notices. The greatest fear most people have in the digital age is that people wouldn’t notice if they weren’t there. The fact is, they probably won’t. So, good. Go away. If no-one notices that you went anywhere, it’s a good sign that they probably also don’t notice you when you’re there. Don’t try and impress. Instead, actually do something monumental with your life. Don’t try and gain attention; genuinely make a difference in the world. Don’t try and make your social network jealous, you’ll just end up looking like a try-hard. The greatest actors in the world are not on social media. Their social media team is, but they aren’t. Think about it. Go away, and if you’re lucky, someone will call and say how desperately they need you. If not, come back when you actually have something impressive to show or say.

7. Treat yourself kindly.
You do not have people putting pressure on you. Even if you feel you do, you don’t. You are putting pressure on yourself. Pressure to prove something to the industry, pressure to show your parents they were wrong about your life choice, and pressure to succeed in this industry, whatever that even means in this day and age. Give yourself a break. You are doing the best you can with the tools you have, and you are getting better and better each day. If you’re not, then the pressure is most certainly not from anyone else; it’s your conscience, so work harder and smarter. Treat yourself kindly and you will find that when the new year rolls around, those resolutions you want to make will be that much easier to stick to.

Paul Barry
Paul Barry is an L.A.-based Australian acting teacher, author of “Choices,” and a Backstage Expert. Barry runs on-camera classes in Santa Monica as well as online worldwide and conducts a six-week program called Dreaming for a Living, coaching actors, writers, and filmmakers in how to generate online incomes to support their art.
END_OF_DOCUMENT_TOKEN_TO_BE_REPLACED