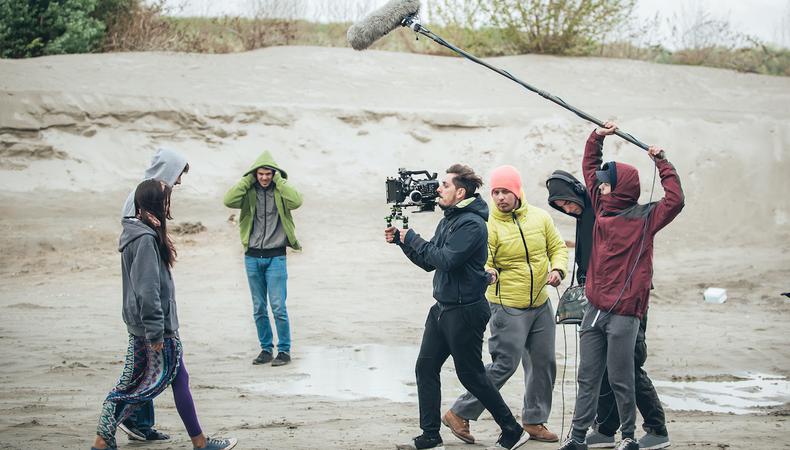 In the world of film and video production, the old adage is most definitely true: it’s not what you know, it’s who you know. You might be the best gaffer in the city. Or maybe have cinematography chops that would make Roger Deakins jealous. But if you don’t have a solid network built out, you might find yourself chronically out of work.

And as someone who’s moved cities multiple times, I know how hard it can be starting out fresh in a new place and trying to establish yourself in a competitive industry. It takes a combination of proactiveness, patience and resolve to find the right communities and make those important connections needed to build out your crew network.

But trust me, once you get started and make those first few, the rest will come more naturally. Best of all, you’ll most probably make some lifelong friends along the way.

The Importance of a Crew Network
If you’re just starting off in the industry, you might ask yourself, “what is a crew network?” Basically, it’s the loose grouping of your personal and professional contacts in the industry. If you’ve been on a shoot of any size and in any role from PA to director, you’ve already started building out your crew network.

Here are some reasons why having a crew network is important:

As you develop your network, you’ll most likely find that the majority of your opportunities don’t come through agents or Craigslist ads, but rather through these network connections and friendships.

When I was first starting out, being on set felt simultaneously overwhelming and exciting. I quickly found that if I channeled the excitement and found other crew members who seemed equally psyched to be working in this field, the rest just fell into place. Those friends I made on some of my very first shoots? They’re the same ones who went on to become DPs and producers I still work with to this day.

How to Build Your Crew Network

1. Politely introduce yourself when you can.
When first meeting other crew members on set, a first impression can be a make or break moment. And while it may be nerve-wracking when you’re first starting out, remember: it can be nerve-wracking for everyone, including the person introducing themselves back to you.

Also, be sure to pick your spots. When you’re on set, you’re expected to be working and engaged. Luckily, there are often plenty of moments of downtime and breaks when it’ll be more appropriate to make introductions.

2. Remember names and details.
Remembering names can go a long way in building a solid relationship quickly. One trick is to instantly assign a fun nickname to the person combined with their name. Try “Darcy the Director” or “Too Tall Tyler.”

Remembering a personal detail that comes up in conversation can also score major points down the road when you want to reconnect (or ask to work together). Recalling that “Too Tall Tyler” the gaffer was about to become a dad when you worked together gets you an immediate in when you reach out and ask how the baby is.

3. Networking and film meetups.
Don’t limit yourself to making connections only when you’re on set though, as there are plenty of proactive things you can do to seek out new contacts and find opportunities when not on the job. The idea of “networking” can have a negative connotation, but in the film and video industry, it’s actually quite fun and rewarding.

Look for opportunities to meet future collaborators and employers on sites and community pages like MeetUp.com (hyperlocal, search for terms like “film making,” “film/video/tv production,” “filmmakers,” and “crew”), ProductionHub, and even EventBrite. Seek out specific group pages through Facebook and Linkedin. (A LinkedIn search for “film crew” turns up more than 240 networking groups.) Once you start making connections, always ask others where they network as well to keep your net ever-expanding.

4. Follow up and try to stay in touch.
Besides bonding by working hard and creating awesome projects together, the best way for you to nurture your budding crew network is to follow up and stay in touch. You don’t need to hound people for opportunities or to hang out, but checking in occasionally via email or text just to see how they’re doing and what they’re working on is perfectly acceptable.

5. Join in with your community
Similar to seeking out networking opportunities online, you can also ask around and do some research into what film and video events might be going on in your community. Most major cities will have some big film communities like NYFVC in New York or FilmLA in Los Angeles. And it’s not just the major east and west coast hubs: I’ve been part of great groups in Texas like the Dallas Film Commission or the Austin Film Society.

From there, you can often find smaller niche groups that might appeal to your particular areas of film expertise. From cinematography groups to editing groups to even just fans of different film genres, making friends and connections in the industry will always help.

6. Trade passion projects for passion projects.
Almost without fail, if you work closely enough with other creative individuals in this field, you’re going to be asked to help out on passion projects here and there. And while you might not always like the idea of giving up your weekends or doing work for below pay or free, it can actually help you in the long run.

Plus, if you’re someone working on a passion project of your own. This is the best way for you to build up the goodwill and eventual favors to call in later when you need that extra filmmaking help.

7. Turning connections into friendships.
Finally, while building out a crew network is very much a business endeavor, it’s also highly likely that many of the people you meet and work with every day will eventually become your actual friends and creative partners. Don’t let the need to find the next gig (or, you know, pay your rent) get in the way of seeing people as people. Be open to new friendships and the rest will fall into place.

Jourdan Aldredge
Jourdan Aldredge is a writer, video journalist, and video producer, director, and editor based in Austin, Texas. Check out his e-book, “Shreditor,” about how to hack it shooting, producing, and editing your way in the new wild west of digital filmmaking.
END_OF_DOCUMENT_TOKEN_TO_BE_REPLACED