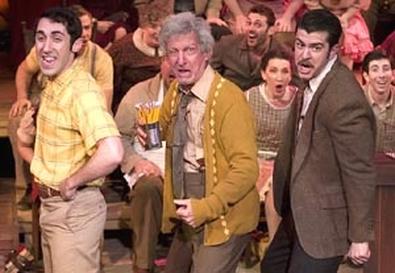 Photo Source: Michael R. Dekker
William Saroyan's "The Human Comedy" began life with an identity crisis. Originally commissioned as a screenplay for MGM, the story of daily life in a small California town during World War II was deemed too lengthy by studio execs, so Saroyan reworked it into a novel. In 1983, 40 years after it was published, the property went through a similar metamorphosis when a musical version premiered at the Public Theater with a score by Galt MacDermot and William Dumaresq. Like "Hair," another MacDermot creation, it went from the Public to a bigger, Broadway berth, but, unlike the hit rock tuner, it closed after just 13 performances.

Critics claimed that the show wasn't made for an expansive Broadway stage. In this new production, the Astoria Performing Arts Center returns it to the kind of intimate space it enjoyed at the Public. But a change in venue can't mask the musical's many flaws, and despite Tom Wojtunik's clever staging, the cast is not up for the challenge.

Michael P. Kramer's wooden-beam set provides the contours of the many settings the musical requires, while also providing an open central area where the ensemble sits throughout, enabling their frequent contributions to the numbers and emphasizing the fact that, in a small town, everyone is in everybody else's business. Wojtunik has deftly guided the 25 players, who bustle around animatedly in front of a quilted service flag, a sobering reminder of the war that serves as the backdrop for this otherwise quotidian snapshot.

It's in the content that the play, and the production, falls short. "The Human Comedy" is entirely through-composed, perhaps in an attempt to create another "American folk opera" like "Porgy and Bess." But the score is a series of kitschy send-ups of different musical traditions, from gospel to swing. Many of them, with their simple structures and pedantic lyrics, come off like TV jingles. In one number, the chorus characterizes one of the leading ladies with the vapid pseudo-rhyme of "Mary Arena" and "nobody keener."

The weakness of the cast's vocals emphasizes these flaws. Especially in the recitative sections, the players try to be too true to the plodding score, and their attention to each note robs the songs of their scant emotional impact. As Bess and Homer Macauley, Deidre Haren and Aaron J. Libby are exceptions to this rule, while Jonathan Gregg (as Thomas Spangler) and Stephen Trafton (as Marcus Macauley) manage to breathe some life into an often robotic score, despite some struggles with pitch and power.

The most poignant moments are saved for the opening and closing, when 4-year-old Ulysses Macauley (played with relentless spirit by Anthony Pierini) waves to a man (Douglas Lyons) on a passing train. "Where ya goin'?" Ulysses asks. "Me, I'm heading home," the man calls back, and Lyons' jubilant cry is the showstopper of the night. (The role will be played by Matthew S. Morgan for the remainder of the run.) This celebration of homecoming is what Saroyan, with his repeated references to "The Odyssey," intended to chronicle, and it transcends the missteps of a show that has lost its way.