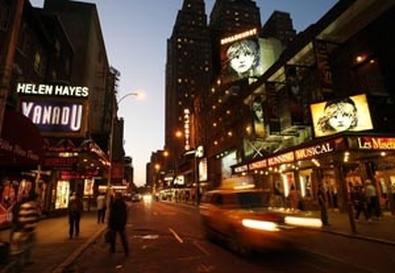 Photo Source: Getty Images
Hurricane Irene is already having a huge impact on New York City and it hasn't even arrived yet. City officials on Friday announced a suspension of the Big Apple's public transportation system effective noon on Saturday. Cultural events will also shutter due to the inclement weather predicted for this weekend.

The New York International Fringe Festival has canceled its performances scheduled for Saturday and Sunday. Before the transit announcement, the Fringe had already canceled its Sunday, Aug. 28, events.

The Fringe is not the only organization taking precautions. The Actors Fund has postponed its special Sunday evening performance of the acclaimed musical "The Book of Mormon." Fund representatives said the performance will be rescheduled. Also, the Classical Theatre of Harlem has canceled its production of "Henry V." It was to be performed in East River Park this weekend as part of SummerStage.

Despite concern over Hurricane Irene's arrival, on Friday morning the Broadway League posted a statement on its website saying that all Broadway shows this weekend will perform as scheduled. The League advised people who want to exchange tickets or get refunds to contact their point of purchase. The League's optimism, however, may be premature, especially given the lack of transportation options for audiences this weekend. Disney Theatrical Productions announced at 3 pm Friday that performances of "The Lion King" and "Mary Poppins" scheduled for August 27 and 28 will not be presented. Disney Theatrical Productions operates outside the Broadway League.

Gov. Andrew Cuomo of New York announced early Friday afternoon that the New York City subway system will shut down on Saturday. All service on Metropolitan Transportation Authority subways and buses, the Long Island Rail Road, and the Metro-North Railroad will be suspended at noon. New Jersey Transit trains and buses will also stop running at noon. If winds at any point exceed 60 miles per hour this weekend, bridges such as the George Washington Bridge will close.

If there are any Broadway cancelations or updates, they will be posted at www.broadwayleague.com.