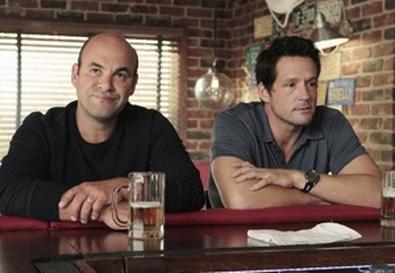 Photo Source: ABC
Whether he’s playing Penny Can, being Bobby’s wing-caddy, or trying to hide what he’s done from wife Ellie, “Cougar Town’s” Andy Torres is endlessly endearing. The same can be said for the actor who plays him, the loveable Ian Gomez.

Before hanging with “the cul-de-sac crew,” Gomez was a staple character on numerous television series, including “Rita Rocks,” “Jake in Progress,” “Felicity,” and “The Drew Carey Show.”

A member of Chicago’s famed Second City for seven years, Gomez’s improv background led him to acting and even got him on TV’s “Whose Line is it Anyway?” Here, he discusses his journey, how to make a Hollywood marriage work, and the chemistry on “Cougar Town.”

Ian Gomez: As a child, one of my defense mechanisms was to try to be funny. My mom tried to nurture that by putting me in acting class. But I got bored when we stopped pretending to be trees and actually had to work. When I got out of high school, I was working in restaurants in New York City, when I heard Bill Anderson from The Neighborhood Playhouse was doing private lessons. I started taking classes and it was a lot of improv and Meisner and repetition. “Red shirt, red shirt, fuck you, fuck you!” We were always saying “fuck you” for some reason. But I really liked the improv. My stepfather had a connection with The Second City and told me I should go there. I woke up in a cold sweat one night and said, “I'm moving to Chicago.” That's how I went to Second City.

Back Stage: You also did iO Chicago, right?

Gomez: I did. At the time, it was easier to get on stage at iO than Second City. At the iO, if you showed any promise they'd throw you on a team and you got up on stage. That was the best because you could make all your mistakes, and you’ve really got to make a lot of mistakes. You lose that fear of failure pretty quickly because you're going to fail, and fail horribly. Once you lose that fear, good stuff can happen because you're not in your head about whether it will suck. Once you don't care and accept that it probably will suck, then it probably won't suck.

Back Stage: What brought you to Los Angeles?

Gomez: I met my wife, Nia Vardalos, at The Second City and she was chomping at the bit to move to LA. I was afraid of having to start all over again, which happened. But we got lucky. Nia started doing a lot of voiceovers. Then, while I was doing a Second City alumni thing, someone said, “Go talk to my agents.” They hip-pocketed me and I got an audition for the pilot of "The Drew Carey Show." I booked a guest star spot, and then the show got picked up and they had me come back for more and more episodes and it just snowballed.

Back Stage: You and Nia have a successful Hollywood marriage. Do you have advice for actors in relationships?

Gomez: We come from Second City where you're taught if you make your fellow stage partner look good, that makes you look good. But some actor couples compete with each other. We don't have that. When Nia was going through the whole “My Big Fat Greek Wedding” thing and having super huge success, people were like “Don't you feel like you should be supporting your wife and instead she’s supporting you?” I was like, “No.” That made absolutely no sense to me.

Back Stage: Tell me about booking “Cougar Town.”

Gomez: I knew [co-creator] Bill Lawrence because he’s married to Christa Miller, who I worked with on "The Drew Carey Show.” Courteney Cox was in the [audition] room and was very supportive and laughed. The audition process was unique because Bill introduces you to everybody, makes self-deprecating jokes, and makes you feel at ease. It was the best audition process I’ve ever been through, and I’m so glad I got it.

Back Stage: Is there a lot of improv on the show?

Gomez: Not really. Bill always says, “Do it the way it’s written first, let’s get that perfect, and then if you have a suggestion we’ll absolutely try it.” But it’s rare. There’s no need to. The writers are there and they’ll come up with alternate lines for us to do. The writers actually hang out with [the cast] and listen to us talk. They create the characters through us, which really helps each of us be as natural as possible. Like Brian [Van Holt, who plays Bobby Cobb] and I really do have this love affair with each other. It’s fantastic. I’m the Gilligan to his Skipper, or maybe the other way around.