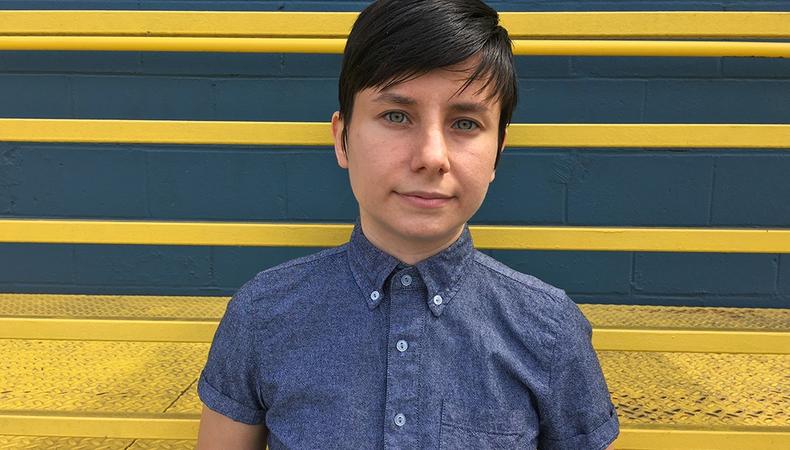 Premiering at the Los Angeles Film Festival, “Sensitivity Training” is screenwriter and director Melissa Finell’s first feature film. But the filmmaker is no novice; her short film for UCLA, “Disaster Preparedness,” was honored at the Student Academy Awards. Finell enlisted the help of mentor Charles Haid, whom she met while attending UCLA, to executive produce “Sensitivity Training.” The comedy revolves around the upbeat Caroline helping scientist Serena learn to adjust her interactions with her employees.

Serena and Caroline are complex, relatable, and genuine characters with very distinct personalities. “I wanted to find actresses who could really embody these two distinct personalities and have great comedic chemistry with each other,” Finell says. Finell met Anna Lise Phillips at a screening party of “One Armed Man” at Haid’s home. “I really enjoyed talking to Anna Lise at the party and found her incredibly smart, sharp-tongued, funny, and charming,” says Finell, who went to her producer Megha Kohli about casting Phillips as Serena. “I watched as much of Anna Lise’s work that I could find, which confirmed that she was an incredibly talented, powerful actor, but she had never done comedy before.” But having met her, Finell knew she was funny, so she sent her the script. “Luckily she really connected with the script, and she blew us away in her audition.” Despite Serena’s abrasive attitude toward others, the depth of the writing combined with Phillips’ acting bring out the heart in the character enabling the audience to root for her.

Casting director Kerrie Mailey brought Jill Alexander to Finell for the role of Caroline. After seeing Alexander on “Silicon Valley” and “Mad Men,” Finell wanted her to audition, but Alexander was leaving for a family vacation, so she put herself on tape. Finell liked the tape and arranged a Skype call during Alexander’s vacation. “During the call, Jill had to stop every few moments to kindly ask her four-year-old daughter to settle down. ‘Mommy's working,’ she told her sweetly. I immediately realized that she was Caroline. That sealed the deal for me.” The warmth Alexander brings to Caroline creates a perfect contrast to the abrasive nature of Serena.

Finell enjoyed casting the supporting roles. She wanted Haid to play the role of Glen. “I knew that he could deliver the bold and funny performance the role required.” He also brought in Amy Madigan, who plays opposite him as Serena’s mother. “She is so fantastic in her scene, and her chemistry with Charlie and Anna Lise is palpable.” In addition to casting Alexander, Mailey found supporting actors Courtney Fansler (Maggie), Challen Cates (Dr. Laura Stern), Brent Bailey (Makeout Jake) and Bob Beuth (George).

Finell had worked with Amy Vorpahl on her previous short film “Disaster Preparedness,” which she partially cast through Backstage.com. Finell says Vorpahl immediately came to mind for Joan, the overly emotional scientist working in Serena’s lab. Vorpahl also served as associate producer and helped bring in several other actors, including Tessa Goss as Sarah and Andy Gala as Dr. Hamilton, and Elko Weaver and Timmy Heureux as two businessmen.

“Disaster Preparedness” also led to the casting of Quinn Marcus, whose film “Alone With People” screened in the same program at Outfest. “As soon as I saw ‘Alone With People,’ I just knew Quinn would be great for the role of Ellen, Serena's awkward, yet lovable, lab assistant. Sometimes when you see a fellow filmmaker’s work, you just know that you share a similar worldview and are meant to work together.”

One challenging role to cast was Ethan, Serena’s teenage half-brother. Finell says she saw many talented young actors, but none of them felt like real teenage boys. Haid emailed her a video audition from a young actor. “He was great, very honest and open and real. Charlie didn’t mention the actor’s name, so I assumed he was one of Charlie’s undergrad students.” She liked the performance and was surprised to learn that the actor was Haid’s son, Finnegan Haid. “Finn came in and read with Anna Lise, and I knew right away that they had amazing chemistry as brother and sister. Anna Lise agreed, and Finn was cast.”

Despite the quirks each character possesses, Finell’s writing paired with the strong cast of comedic actors brings to life characters that are sympathetic and relatable. “Sensitivity Training” runs June 5 and June 8 at the Los Angeles Film Festival.

Melinda Loewenstein
Prior to joining the Backstage team, Melinda worked for Baseline StudioSystem tracking TV development. When she's not working, she enjoys cuddling with her cats while obsessively watching every television show to ever air.
END_OF_DOCUMENT_TOKEN_TO_BE_REPLACED