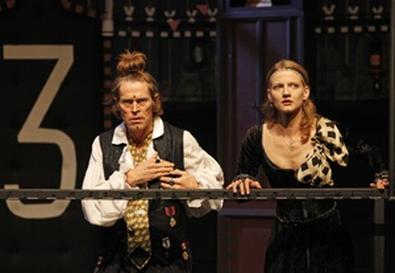 Photo Source: Joan Marcus
You either get Richard Foreman or you don't—and I'm in the latter camp. For more than 40 years, the founder and director of the Ontological-Hysteric Theater has been unleashing his unique brand of theatrical mayhem, collecting Obie Awards by the bushel and enrapturing or confounding audiences. His latest effort, "Idiot Savant," is just as bizarre and perplexing as any of his 50-odd other plays. The one element that may draw non–Foreman cultists is the presence of Willem Dafoe, an Oscar nominee with roots in the avant-garde theater. Dafoe, a founding member of the Wooster Group, has collaborated with Foreman before and brings a gritty reality to the obscure goings-on. He really appears to be going through a crisis, but what it is or why it's important is never addressed.

A plot summation may be pointless, but here goes: In what appears to be a darkly oppressive hunting lodge of vaguely European design, the Idiot Savant (Dafoe) debates the meaning of certain magic words such as "me," "you," "right," and "wrong" with two women named Marie (Alenka Kraigher) and Olga (Elina Löwensohn). Moving at a glacial pace amid the letters and numbers decorating the set (also designed by Foreman), they bump into walls, drink alcohol from hanging bottles, munch fruit, and speak of mysteries and despair. Occasionally, three servants appear and point suction cup–tipped arrows at them, then withdraw. After an hour of this rigmarole—to the accompaniment of sound designer Travis Just's deafening crashes and sirens, and baffling shifts in lighting by designer Heather Carson—a giant duck appears to engage in a game of interspecies golf. The humans reject the huge bird, who waddles off crying, "Arrogant bastard people. Goodbye forever." It's not as funny or profound as it sounds.

Kraigher and Löwensohn are attractive performers and, like Dafoe, they manage to convey a sense of character and purpose, but obviously Foreman is not interested in conventional narrative or motivation. He has his own unique style and aesthetic, which has resulted in previous works of intriguing beauty. There are brief moments of bizarre whimsy here, but this piece is so deliberately obscure and abstract, I was totally lost and didn't care about anyone or anything on stage.

An offstage voice, probably representing Foreman, intones at the top of the play: "Message to the performers: Do not try to carry this play forward. Let it slowly creep over the stage with no help, with no end in view." Unfortunately, the cast carries out the writer-director's intentions, and "Idiot Savant" drags itself pointlessly along to an unsatisfying conclusion.