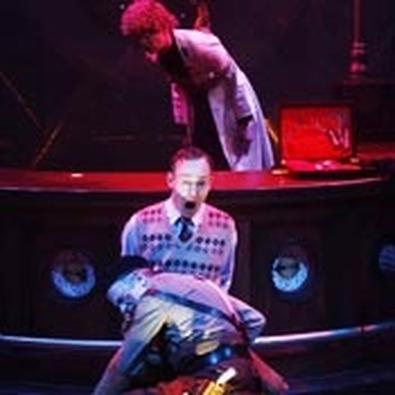 Like a cross between Monty Python and The 39 Steps, with a soupรงon of The Threepenny Opera and a dash of Dr. Strangelove, Improbable Frequency is absolute entertainment. Although it's nominally about code cracking in neutral Ireland in 1941, it's a silly theatrical romp. How delicious, in these days of multimedia amazements and monologue rants, to feel needed in the audience. Ahhhh. This holiday gift to theatregoers offers an original music hall-style, Weimaresque score by the duo Bell Helicopter; a set by Alan Farquharson featuring a semicircular bar doubling as a cabaret stage; bold, campy costumes by Kathy Strachan; and a bubbly six-person cast.

Arthur Riordan's lyrics and much of the spoken book dazzle in rhyme: "Be careful not to patronize the Irish/Though they don't object to patronizing you/Is it smugness or insurgency/That makes them say emergency/I feel it lacks the urgency of World War II," advises the British office staff. IRA agent Muldoon (Kelly) leads the crowd at the Red Bank Bar: "With a song and a smile and a sig and a heil/And a tooral aye ay for the IRA/The Brits are at war so we'll give them what for...."

All of the cast are versatile — better at acting than singing, but it's in keeping with the style — but Louis Lovett's jolly panache as Betjeman is a knockout, and Drummey's saucy sweetness is particularly adorable.