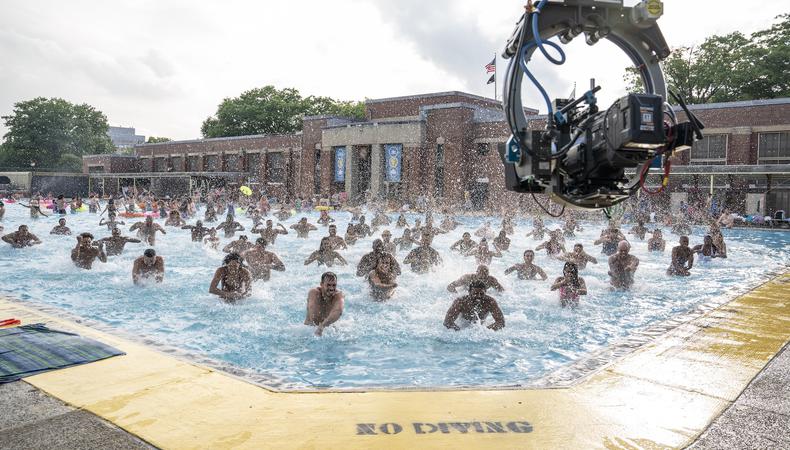 Taking Lin Manuel-Miranda’s “In the Heights” from Broadway to the big screen was a massive feat, particularly as far as the many dance numbers were concerned. The film’s choreographer Christopher Scott, whose work ranges from “So You Think You Can Dance?” to various Disney Channel hits, says one of his main goals on the Jon M. Chu adaptation was to ensure no dancer ever felt underappreciated. Here, Scott speaks with Backstage about crafting the project’s most extravagant musical numbers and why it’s important for dancers and choreographers to work together as a community.

How would you describe the role of a choreographer?
I could talk about this for 10 hours, because I think a lot of people don’t quite understand what the role of a choreographer is. We’re really responsible for the overall movement created for the screen. Basically when I’m doing my job, I feel really responsible for making sure the story reads through movement, through dance. Making sure we are representing dance properly, whether it’s cultural—I mean, it’s all cultural in a sense, because for example, for this film, you have the Latinx styles of dance: Mambo, Son, Afro-Cuban, but then you also have the street styles, the breaking, popping. So I think it’s the choreographer’s job to make sure that we’re feeding it to the world authentically and properly. Even just working with the actors, we’re responsible for making sure they get to be the actors through all the dancing. I think that’s a big thing that people miss sometimes, is our job is a huge collaboration with many different things that we have to be responsible for. 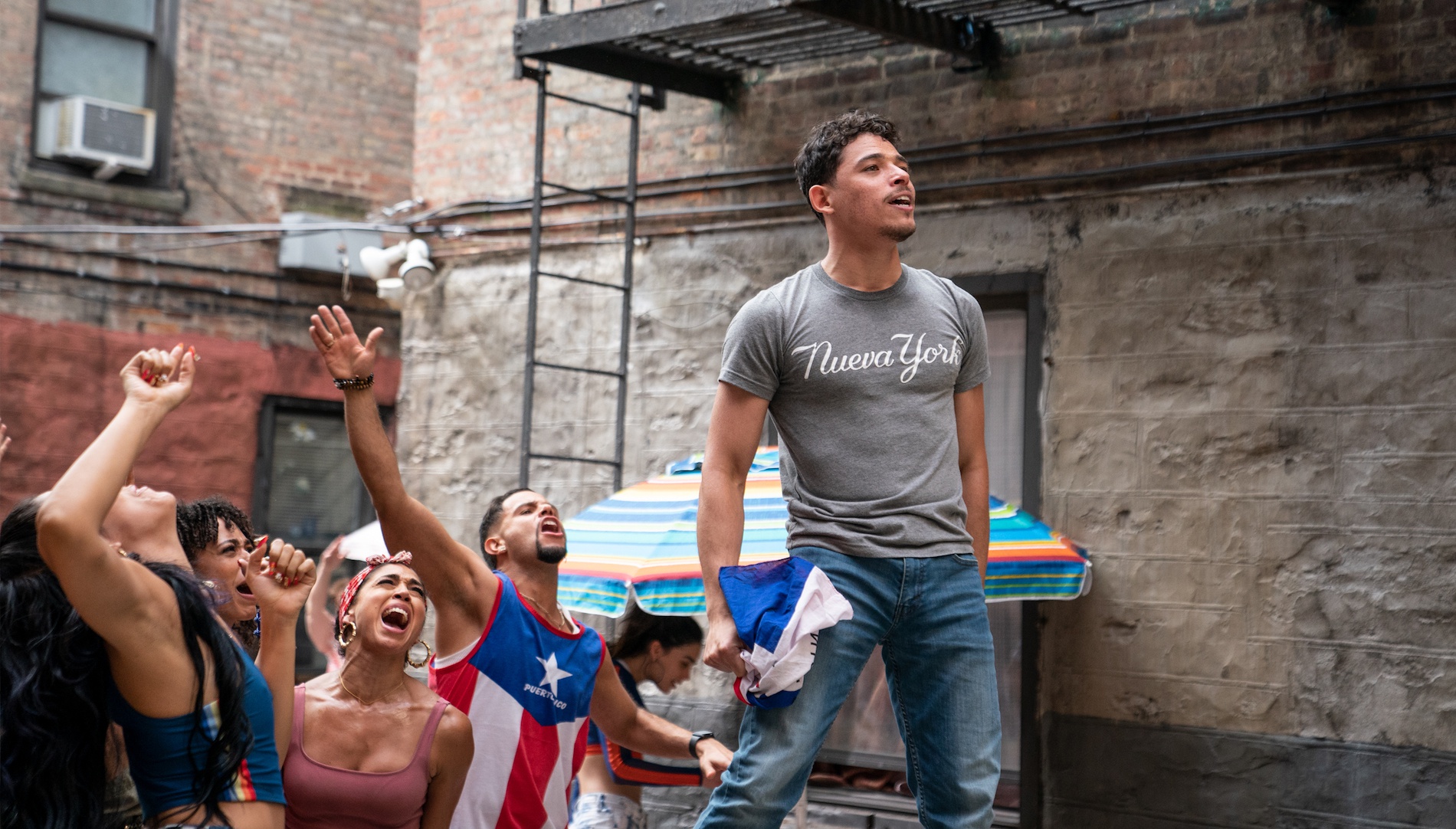 Does the choreography process differ for something on as huge a scale as “In the Heights”?
I mean, no matter how big the scale gets, I feel like the job is always the same. It’s always, you gotta spend some time sitting with the music, then you have to get with some skeleton crew dancers, or in some cases it’s just your friend coming over to vibe out with you. You just start creating a language for whatever routine you’re gonna do. The biggest difference between this film and “So You Think You Can Dance?” is just the amount of time. For “In the Heights,” I had months and months to think things through. On “So You Think You Can Dance,” you get hit with a number that week, I have one day to prepare a number, then one day to teach a dancer the routine, and then I get a second day to make sure it’s good. And then I crossed my fingers and hoped they’d do OK on the stage. In that show it’s a contest, so if they fail, it’s a part of the contest. On the movie, nobody wants anybody to fail. We never want anybody to fail [on the show] either, but that’s part of the show. So that’s a big difference when you’re shooting a movie: We’re all there to support these actors and these dancers and make sure they have everything they need to be successful. And then just budget. It’s nice to have a little bit of money, but I’ll tell you, it never feels like it’s enough. No matter how much bigger the budget gets, we’re all sitting there having the same conversations, cutting dancers, cutting scenes, cutting things. And you’re just like, Ugh!

How much were you basing the film’s choreography on that of the onstage musical?
To me, everything felt very inspired from the music. The difference between having a preexisting show on Broadway to something that we’re creating new is that we had the music way far in advance. Typically, like when I’m doing a “Teen Beach,” for example, or another Disney Channel musical movie, they’re making songs as I’m rehearsing. So I don’t even have a song until like a week before I’m rehearsing it sometimes, because that’s just the nature of the beast. But for this, I could sit with this music for a long time. Even before I got the job and I was hoping to get the job, I was listening to that soundtrack on loop. I can imagine what inspired [Broadway choreographer] Andy Blankenbuehler for the stage show are the same things that were inspiring me for the choreography. If you listen to the music, a lot of times it will guide you and tell you where to go. The big difference is that we had the ability to take a camera and go to the Highbridge pool in Washington Heights. I feel very fortunate that we were able to do that.

“It’s kinda similar in the way that dancers are banging at the door to be seen too by the industry and the powers that be.”

What was the process for choreographing the more fantastical elements of the film?
I get really excited for those moments. I love the grounded moments, too. But, when Jon was like, “Alright, we’re gonna dance on the side of a building,” you’re like, “OK!” And then that’s all I could think about for the rest of the day. I think the biggest challenge in this film, and what I’m kind of learning in my career actually, is a lot of times people say, “I don’t connect to musicals.” It’s either you love them or you hate them. Either you’re like, “I love watching people break out into song and dance,” or you’re like, “I don’t get it, why do people break out into song and dance?” And so I think for me, it’s become the kind of artistry I’m trying to tap into now, which is really how to make those moments feel a lot smoother of a transition so that more people can connect to it and you don’t bump people out of the moment that aren’t familiar with [the format]. I hope that’s what we did with the film.

Is that what stood out to you from a story perspective, transitioning between those grounded moments to more surrealist ones?
I think from a story perspective, what stood out to me was just being a part of something that didn’t really have the villain, or that kind of typical structure that you get most of the time with the characters’ conflict. This was very human, very relatable, and it wasn’t your typical script. There’s no car chases, no big dramatic moments where people’s lives are at risk. The most we had was the blackout, it’s kind of crazy, but it’s not like explosions and action-packed. So [it becomes,] how do you keep people engaged? Which is why I think song and dance are so important for a story like this. I think it gave Lin a lot of leeway to sit people in a theater and ground them in this really beautiful story of hopes and dreams set in Washington Heights, but also to create a larger than life world that we can all watch and explore in a fantastical way.

Some scenes feature dozens of dancers. For you, what were the biggest challenges as far as connecting with each performer who’s going to appear in the frame?
We have 75 dancers in the opening number, which isn’t even our largest number. For “96,000,” we had 90 dancers. And one of the biggest challenges was holding onto them, because as [the studio is] spending money, they’re constantly looking at ways to cut down costs. And one of the biggest ways that they do that is trying to cut dancers. And it’s funny because when you were referring to them, too, you were saying the “background dancers.” And even just that word, it’s become this whole movement for dancers to just be seen and to be heard as artists. So a big thing was making sure that they don’t feel unimportant to the moment, especially in a movie musical. It was a big deal to fight for 75 dancers, which is why I love Jon M. Chu so much, because he fights for them. I can beg for 75 dancers. At the end of the day, all the producers are going to the director to be like, “How do you want to spend your money?” So that was huge for us.

READ: How to Become a Choreographer

What advice do you have for dancers who dream of landing an “In the Heights” sized blockbuster?
I was a dancer myself. First and foremost, I still call myself a dancer. I’m very proud of that word. I’m very proud of what it’s done for my life. I always tell dancers, “Don’t wait for somebody to give you an opportunity, make them for yourself, especially right now, when you have YouTube.” I didn’t have YouTube available to me when I was starting out as a dancer. Use that, show people who you are, your movement. And if you can find a way to separate yourself from the pack, do it. My version was tap dance. I would go into every audition, no matter what it was, and when they would say freestyle, I would be on my sneakers and I would just tap dance like my life depended on it! And it would make [choreographers] look at me, even for just one second, but at least it made them look at me.

On a similar note, what advice do you have for aspiring choreographers?
What I would say to choreographers is learn from the people that came before us as much as you can, because they learned a lot from trial and error. And I was very lucky to learn from a choreographer named Jamal Sims. And I would work under him all the time, and I still would work under that man, because I learn something every single time I do. You’re gonna have your own style of being a choreographer. You’re going to have your own process. I think that’s important. You should have your own process because you have to find the process that ultimately tells the world through your voice. The more you can absorb, the more you can learn from the choreographers that came before you. They’re here, they love feeding you information if you ask the right way.

Has networking within this community been useful for you?
Yes! It’s a very beautiful community, the choreography community, as cutthroat as it is. I feel very lucky to have peers that have my back and I have their backs. And you’ll see in the movie, I have cameos from friends. Travis Wall came out to dance, not even as a favor, just because he wanted to support me, because that’s how our community is. Be part of the community because we need it and we need people to get involved, to move us in the right direction. We’re trying to get unionized right now. It’s really hard. We’re the only people on set that don’t have a union, it’s crazy. People on set would be like, “You don’t have a union?” Certain platforms don’t recognize choreography. People have been like, You’re going to get nominated this year for the Academy Awards, and it’s like, Well, we don’t have that. And I understand. It’s just the more we can come together as a community and learn from each other, the more our whole field is going to thrive because we have a lot of challenges we need to overcome.