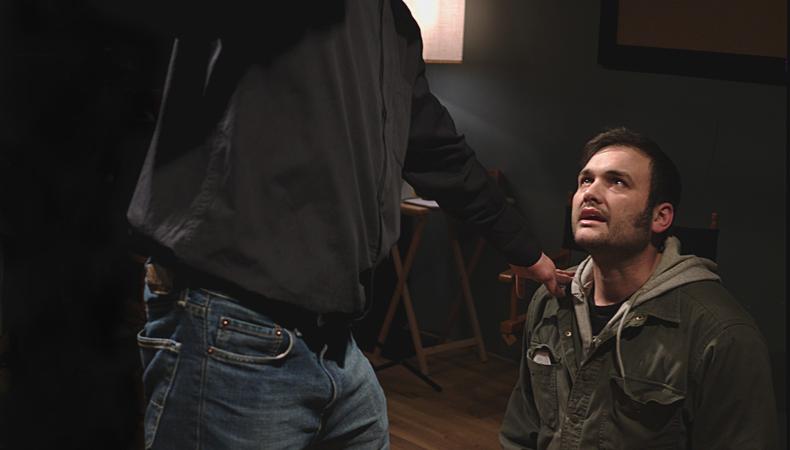 In 1967 a Jesuit priest led a team of three men to break into a Baltimore draft office, pouring blood (including some of their own) on draft files to protest the escalation of the Vietnam War. Although he spent years in jail, the priest continued similar raids when released on bail. As anti-war sentiment grew, the protests spread across the country: dozens of Americans burning and destroying draft cards, inspired by that first spark. Based on such heady subject matter, Jack Karp’s “Incendiary Agents,” directed by Peter Jensen for Nylon Fusion Theatre Company, anticipates a fiery conflict but delivers only a few puffs of smoke.

Patrick (Alexei Bondar), a Catholic priest, has developed a following for his sermons that includes Nancy (Jamie Neumann), a nun whose feelings for him aren’t exactly chaste. When Patrick resolves to do more than just talk, they stake out a draft office joined by two friends, Tom and Bill, as well as Patrick’s brother, Jimmy (Josh Sienkiewicz), whose son is already fighting.

One might expect the central struggle to play out between the protesters and the government, represented here by the FBI’s Agent Drew (Eric Rice). Patrick and Drew square off repeatedly, but the pairing is so unbalanced that it drains any scene between them of its force. Karp’s clunky dialogue restricts Rice to playing an agency puppet: He delivers lines such as “The law is never wrong; it’s the law” with no trace of irony or uncertainty.

Instead, the primary conflict involves Patrick, the idealist, and Jimmy, the realist: Jimmy has ratted Patrick out to the feds in exchange for his son’s safe return. We witness the fallout in a series of flashbacks, which Dan Stearns’ lighting highlights with a utilitarian power that complements the ominously looming stacks of boxes that make up D. Schuyler Burks’ set. But given the high stakes, Patrick and Jimmy’s arguments are remarkably sedate, with Bondar and Sienkiewicz giving a pair of bloodless performances in the midst of a bloody war.

This is a particular problem for Bondar, who can’t muster the requisite passionate charisma to be believable as either an activist leader or a messiah figure; watching Patrick’s sermons, it’s hard to see how he could acquire acolytes. The only character who might compel me to risk prison is Laura Pruden’s Mary, Jimmy’s wife, whose wisecracking sass shatters into uncontrollable grief in one of the play’s climactic moments.

Karp clearly holds “Incendiary Agents” up as a mirror against American attitudes toward the war in Afghanistan, demanding to know when protest sentiments such as those that drove draft-office raids will return. It’s a fair question in a decade sapped of the political vitality of the past, but Karp’s sermonizing isn’t going to lead the charge.