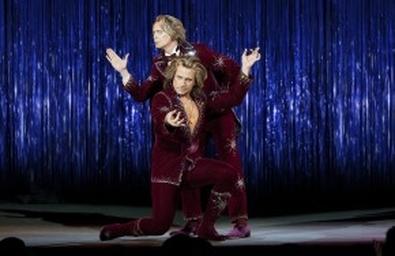 Where other comedians flaunt an edgy or manic vibe, Steve Carell exudes a nice-guy normalness. That ought to severely limit his chance at stardom, relegating him to roles as the funny best friend, but Carell’s talent has been to take seemingly ordinary folks—such as Michael Scott on “The Office” or Maxwell Smart in the big-screen “Get Smart”—and show how deeply nutty they are underneath their buttoned-down demeanor.

Maybe that’s why it’s at first jarring to see him play Burt Wonderstone, the pompous, womanizing magician of “The Incredible Burt Wonderstone.” This is the type of cartoonish buffoon Will Ferrell tackles. But like the movie itself, the longer you stick with this guy, the more his warmth and charm come through.

Directed by “30 Rock” veteran Don Scardino, “Burt Wonderstone” follows a very Ferrell-esque template for broad comedy. Burt (Carell) and his longtime friend and partner Anton (Steve Buscemi) have been a successful Vegas act for years, but their popularity starts fading once audiences become enchanted by the extreme Criss Angel–like street magic of Steve Gray (Jim Carrey). After Burt and Anton lose their cushy gig and have a falling-out, Burt hits rock bottom and tries to rediscover his childhood love of magic with the help of a pretty, aspiring magician (Olivia Wilde) and a crotchety retired pro (Alan Arkin) who inspired Burt as a boy.

“Burt Wonderstone” feels like a presto-chango redo of “Talladega Nights”: Conceited blowhard gets taken down a few pegs and learns some humorous life lessons. It’s tempting to wonder what someone like Ferrell would have done with Burt’s titanic self-regard and clueless callousness; Carell is too inherently decent to pull off such an over-the-top cad, and the film’s early stretches are its most strained.

Thankfully, once Burt loses everything, “Burt Wonderstone” gets not just funnier but also sweeter. Stripped of his celebrity, Burt returns to normal human behavior, and Carell makes the character’s every humiliation and small step of growth intensely lovable. Of course, Carell is assisted by a game supporting cast, particularly Buscemi, Wilde, and Arkin (his “Get Smart” and “Little Miss Sunshine” co-star), who give relaxed performances without constantly going for the laugh.

That job, naturally, belongs to Carrey as Burt’s hot new rival. You expect the rubber-faced comic to overdo his character’s scuzzy edginess, and he doesn’t disappoint, turning Steve Gray into a consistently enjoyable irritant. In truth, Carrey is probably funnier than Carell in “Burt Wonderstone,” but Carell doesn’t need to be. He brings a powerful likability that allows us to find Burt’s redemption unexpectedly touching. Though formulaic and a bit uneven, “Burt Wonderstone” is further proof that Carell’s small-scale comedies have their pleasures. This nice guy finishes first once again.