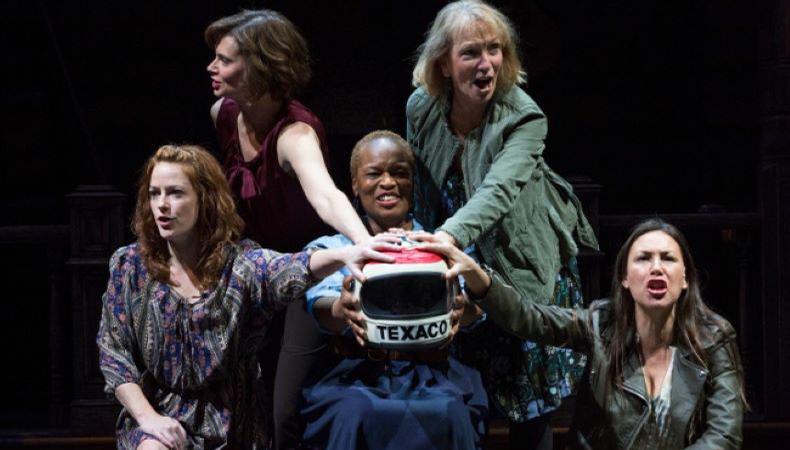 This year, the state of Indiana is celebrating its bicentennial; it was admitted to the United States in 1816. To commemorate the occasion, the largest theater in the state, Indiana Repertory Theatre, commissioned 30 local writers to create short works about the Hoosier State, in a compendium piece called “Finding Home: Indiana at 200.” The show ran until Nov. 19, which means it encompassed Election Day. “There’s music in it written by Tim Grimm, a native Indiana singer-songwriter,” explains Indiana Rep executive artistic director Janet Allen. “He wrote the lyric months ago: ‘We’ve had five vice presidents from Indiana.’ The lyric was, previous to [election night], ‘We might have six with Pence.’ He’s had to rewrite that lyric, of course.”

But even though the state of Indiana turned red on Election Day, and its governor, Mike Pence, won the vice presidency, that doesn’t mean it’s a monolith of conservatism. “There’s been lots of doldrums in our city as well,” says Allen. “And protests.” Indiana Rep is located in the capital city of Indianapolis. The miniplays within “Finding Home” also dealt with racial unrest, including Native American displacement, the Ku Klux Klan’s activity in the state, and immigration.

In addition, other works in Indiana Rep’s 2016–17 season deal explicitly with race, including “Guess Who’s Coming to Dinner,” by Todd Kreidler, based on the 1967 film (Jan. 10–Feb. 4); “The Cay,” by Gayle Cornelison, based on the children’s novel (Jan. 28–Feb. 26); and “Miranda,” by James Still (March 28–April 23). “There’s always a fair amount of racial discussion that we’re doing, and it needs to be done,” says Allen. “This is one of the largest cities in the country that does not have a minority theater company of any kind. That is not a demographic issue—there’s a considerable African-American population in this city and in this state.”

As the only LORT theater in Indiana, Allen considers the Rep a place for everyone—of all ages and all races. That means the season’s nine-show lineup includes mainstream works (“Boeing Boeing,” by Marc Camoletti, March 7–April 2), young audience shows (“The Cay”), classics (“The Three Musketeers”), and new plays (“Finding Home”). It also means the audience at Indiana Rep includes “some people who rarely come to the theater, and some people who are going to the theater worldwide, who are very knowledgeable about theater,” says Allen. “Variety is really our watchword.”

When it comes to acting talent, 25 to 30 percent of Indiana Rep’s acting credits each season are local, while the rest come from Chicago. The company holds a general open call in Indianapolis every spring, a regional call in Chicago, and then casts on a show-by-show basis. There is also the occasional audition in New York.

The theater also accepts headshots and résumés, though Allen has a tip for those interested. “New York–based actors tend to think that everything gets cast six weeks to two months out,” she explains. “That is utterly not true in Chicago; Chicago works four months to six months out. Right now I’m getting reams of submission for ‘Boeing Boeing,’ which goes into rehearsal here Feb. 14. It’s been cast for three months. People, you are way too late to get in on this.”

Moral of the story: Get in early!

Ready to work at a Tony-winning regional theater? Check out our theater audition listings!