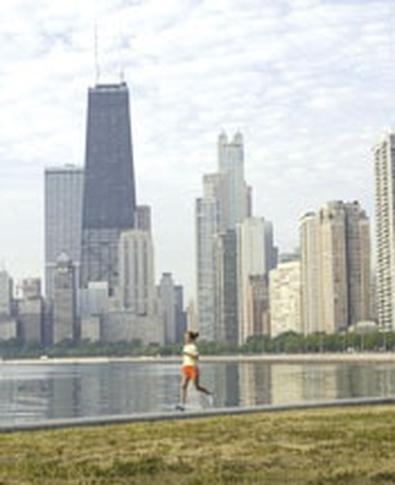 First, the good news. Ask Betsy Steinberg about Chicago film production in 2007 and she doesn't equivocate: "It's just hellzapoppin!" Steinberg is managing director of the Illinois Film Office and says that in June alone there were half a dozen major projects shooting in the city, including Christopher Nolan's $150 million Batman Begins follow-up, The Dark Knight; The Express, a football film starring Dennis Quaid; The Merry Gentleman, Michael Keaton's directorial debut; and Witless Protection, a new comedy from Larry the Cable Guy. According to early estimates by ReelChicago.com, an industry website, film production revenue in Illinois should total $90 million-$100 million in 2007. That would be shy of 1999's record-best $125 million but a clear improvement over 2006's $60 million.

By most accounts, the reason for the rise is a set of tax incentives signed into law in May 2006 by Gov. Rod Blagojevich. The incentives, which Steinberg was instrumental in getting passed, give producers of qualifying films a 20 percent rebate on the money they spend in Illinois, including wages paid to actors and crew who are state residents.

It's a welcome boost for an industry that has seen ups and downs. During its heyday, in the 1980s and '90s, directors such as Harold Ramis and John Hughes shot many films in Chicago. But in 2000, the SAG-AFTRA commercials strike put advertising production on hold for six months, while other types of production slowed, mainly due to the fear of a film-TV walkout. Still, the legislation took some time to have an effect. According to Eileen Willenborg, executive director of the SAG-AFTRA local in Chicago, 2006 was a down year because, though the General Assembly "passed one of the best packages in the country, fine-tuning the rules took until the end of August." By then, most studios had already made their plans for the following year. Now, she says, "there is a very clear link between the more aggressive tax credit and the spike in business we're seeing. I was just in L.A. talking to studios and producers, and they told me, 'Yes, because of your tax credit, we're either coming there or thinking of coming there.' "

But tax incentives aren't the only reason for the rebound in Chicago film production. "States are cutting each others' throats trying to get more-aggressive incentives than the last state got," Willenborg notes, but Richard Moskal, director of the Chicago Film Office, adds, "You also need to offer the other necessary ingredients: local crew, talent, vendors, and a desire to accommodate the industry from a government perspective."

Christina Varotsis, a Chicago producer who recently completed shooting on The Merry Gentleman, agrees. She recalls talking to another producer about whether to shoot in Missouri or Chicago and saying, "Yes, Missouri might have a better tax credit, but they don't have the infrastructure and the crew and cast pool we have here." Willenborg concurs: "I suspect that future big-budget films are also going to do more local hires, because they realize that the talent base is really deep here. They can find what they need, they don't have to pay per diem, and they can get a 20 percent tax rebate on the wages."

What does all this mean for an actor in Chicago? "If you want to work in TV or film as an actor, this is a really stupid place to be," states local actor David Pasquesi. "It's just a fact. People can wish all they like, but there just isn't television and film work here."

Ouch. Or maybe you could say that's the bad news. Even $100 million in production revenue isn't going to turn Chicago into the film capital of the world. Pasquesi says he's primarily in the city to do theatre -- specifically, improv -- but he's no stranger to film sets. While he relies mostly on voiceover work to pay the mortgage and support his family, Chicago's independent-film scene has offered him many opportunities to get his own creative ideas on film. "We make our own work -- a lot of independent films, a lot of shorts," he says. "Everybody here is willing to kick in, if not for free then for drastically reduced prices. Since most of the work people do for a living is in commercials and stuff like that, they're happy to take no money to do something that's more creatively fulfilling. It's a blast."

Molly Glynn, a stage actor who also does on-camera work, puts it this way: "When I say I make my living as an actor, I do. That doesn't mean I make an extravagant living. But we can have families here. We can have children. We can own a house. As actors! I'm a single mom. I've got two kids. And it works. This is a place where you can make it work."

Pasquesi's brand of independent film -- in which people "kick in" their time and talent -- is also not the only game in town. There is a growing number of smaller-budget projects (like Varotsis' The Merry Gentleman) offering well-paying roles to Chicago actors. Films with budgets of $10 million-$20 million, Willenborg says, "are doing significant local hiring when they come to town. One recent movie had a cast of 30 and they hired 26 local actors. Another one had a cast of 28 and they hired 24 locals. There's a lot of opportunity on that kind of film."

Agents also believe that if filmmakers come to Chicago looking for actors, they'll find them. The city's vibrant theatre scene means there are plenty of performers, and the small multigenre community is ready for its close-up. "In Los Angeles, everyone has a niche," Willenborg says. "You're either a film actor or a commercial actor, and rarely do people cross over. In Chicago, you work it all." Varotsis notes, "Even though many in the Chicago acting pool come from a theatre background, they are very comfortable on camera. A lot of the folks that we cast are very comfortable going back and forth between different media."

"If you're focusing on theatre and want to get experience on camera, there are definitely a lot of opportunities here," says Elizabeth Donius, executive director of the Independent Feature Project/Chicago, which supports indie film production in the city. She adds that filmmaking in the no-budget and low-budget categories can come from many sources. For example, the film and video department at Columbia College Chicago is one of the largest in the nation, boasting close to 2,000 full- and part-time students, and sometimes a student project can take off. Crime Fiction, for instance, a film by University of Chicago students, has played at the Slamdance and Vail film festivals and is getting national attention.

Moskal affirms Columbia's importance and points to other pipelines to the independent scene: "We're also seeing filmmakers emerge from the sizable number of ad agencies and from the theatre community as well, whether it's Steppenwolf, Second City, Lookingglass, or smaller storefront theatres. There's a lot of creative talent here that is morphing into film production these days -- sometimes in shorts, sometimes in features."

He adds that the recent success of some Chicago-shot indies is starting to make local investors think of film as a viable option: "There's a lot of activity going on, and some of it is getting attention from distributors and the festival circuit. Investors here are more conservative and traditional. But I think when they start hearing about independent features coming out of Chicago and getting some buzz, and about some filmmakers who are going out to Hollywood and getting studio deals, they start thinking that maybe this isn't a bad investment. It promotes local money, which promotes local product. We've seen a steady rise in that over the last five years."

The Chicago indie-film scene is so eclectic that stage actors wishing to find the right project may have a problem gauging the many opportunities. "The acting scene in Chicago is very much a theatre scene," Donius says. "Actors here really understand the different theatre companies and what level they're working at. The film world is sometimes a bizarre world, and it's hard for the actors to understand what's what. They see a listing on Craigslist or on

PerformInk, and they can't tell if the filmmakers are a couple of Columbia students or a couple of kook jobs. If it's not going through one of the casting agencies, it's hard for them to figure out what's worth their time."

Donius adds, "All of [the films] are being produced on modified SAG agreements. Actors might be union or not, but everyone is working on deferred pay. Some of it can be great exposure, and some of it will never get finished. If you're not getting paid up front, you at least want to know if you'll get a video clip at the end of the day."

The solution, therefore, would be to go through an agent. Unfortunately, many film projects come together by word of mouth. So the best way to break in is to take advantage of Chicago's most distinctive quality: its friendliness.

"I think Chicago is a very tight-knit community," Willenborg says. "We're small enough that people know each other and have worked with each other. You do a play with someone, and five years later you run into her on a commercial set. This is the Midwest: The environment is less competitive. It's more familial than it is out on the coasts. People will actually call people to help them out: 'Hey, I just got a breakdown on this role and think you'd be perfect for it.' I don't think that happens on the coast." Then again, Willenborg says, "If you're the new kid on the block, people aren't going to call you about a role, because they just don't know you."

For Glynn, Chicago is not a hard place in which to become known. "This is not a backstabbing city," she says. "It's a city where we really support and take care of each other. I can't tell you how many times a month I get an email from an actor to tell me about an audition. My younger students are in play-reading groups or monologue groups. And there are so many young theatre companies that start here. I think it's a real place for growth."

Perhaps that's why so many actors call Chicago home. "The people here have decided to stay here," says Pasquesi. "They don't end up here by accident. They want to be here. There are guys who could live in L.A., who have done pretty darn well, and they still have decided to live here. It's a nice place to raise a family. It's a great place to sit around and be out of work. And the fact is, most of the time, that's the job. And this is a great place to do that."