‘Ingenious Nature’ Is Too Scientific 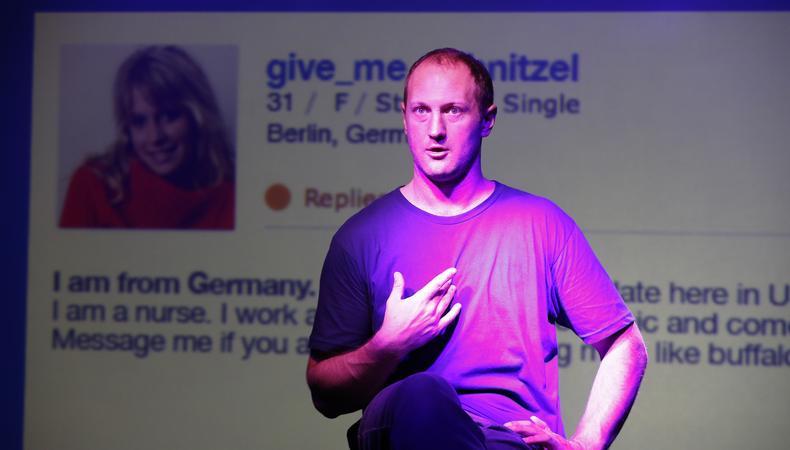 “Ingenious Nature,” Baba Brinkman’s latest theatrical mixtape, as he terms his shows, might better be called “There needs to be a scientific reason why women are confusing and I’m single.” Although the research is admirable, and the empirical principles appear to be sound, Brinkman looks at them from a one-sided perspective: that of an unmarried, 30-something straight man. Now, unlike journalism, theater doesn’t need to be unbiased. Bias is great; it’s what gets us thinking as audience members. It’s singling out women in the audience, pointing at them, and rapping about their ovulation cycle that’s unsettling. Baba, that isn’t going to win you any points with the ladies. I don’t need science to prove that.

However, winning points doesn’t seem to be exactly what Brinkman’s after, as he appears pretty content being a single bro. He loosely sets the proceedings at the apartment he shares with turntabling performance partner Jamie Simmonds. The duo swaps stories about horrific exes and bad dates—basically, the women who have ruined their lives. This discussion sends Brinkman on his journey to figure out the why of it; his answer boils down to the fact that men carry the gene “SRY” and women do not. Essentially, men are from Mars, and women are from Venus.

Brinkman uses the Internet to seek potential matches, and he goes out with three very different women: a conservative religious fanatic; a New Age hippie; and a logical academic. (It’s no wonder that the third date goes the best.) Brinkman does have an impressive knack for translating obscure scientific concepts into rap, and director Darren Lee Cole keeps the piece moving at an appropriate tempo. Brinkman and Simmonds are a great match, as always, and Djalekt’s sound suits the piece. Brinkman’s past works have covered everything from evolution to Chaucer’s “The Canterbury Tales,” and provoking controversy appears to be what he does best, whether among creationists, lit nerds, or women.

Brinkman makes creative use of audience participation. (You can even keep your cell phone on. Imagine that!) In the opening, he asks the audience to vote by texting answers to questions such as “Should I message her?” and sends OkCupid missives to women based on the response. Also, all of his scientific theories—mainly about women wanting marriage and men wanting one-night stands—hold true when he polls the audience. So what’s wrong with me? Who knows, maybe I was just PMSing.