Intimate 'Airswimming' Is Heartfelt and Endearing 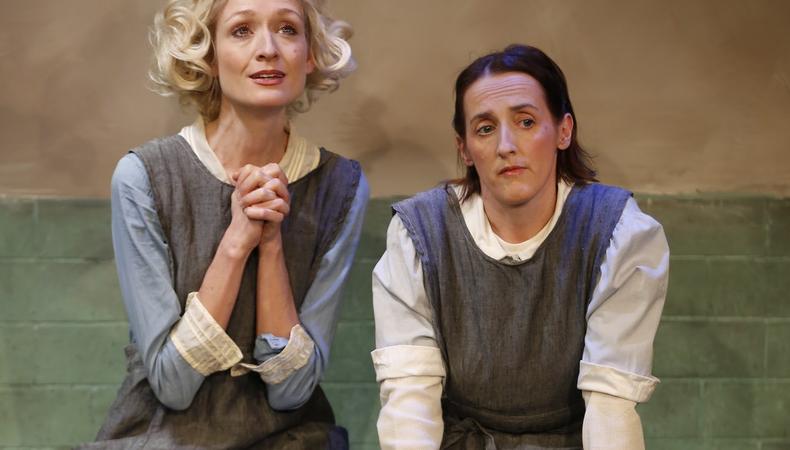 “Airswimming”, written in 1997, is the inaugural work of British playwright Charlotte Jones, best known for her 2002 “Humble Boy,” which was successfully produced in London and New York. This early effort, in its U.S. premiere, is pocket-sized and less ambitious than “Humble Boy,” having just two characters, a single set, and some basic props. But shout it from the rooftops: “Airswimming” is a small but sparkling gem that gleams with heartfelt anger, endearing comedy, and an underlying sadness. It is an intimate play demanding an intimate setting, which it has in the Irish Repertory Theatre’s downstairs space. It also requires much of its two protagonists, blessed here with wonderfully contrasting performances from Aedín Moloney and Rachel Pickup.

The setting is a hospital for the “criminally insane” in 1920s England. Dora (Moloney) has been placed in incarceration for wishing to dress and live like a man. She is joined by Persephone (Pickup), whose family has moved her there because she bore an illegitimate child. Dora is the down-to-earth realist, while Persephone is an upper-class would-be debutante. “Airswimming” tells how these two women share a room and a life together, each giving support to the other when needed. At first the stalwart Dora must encourage the vulnerable Persephone, who is under the impression that she is only there to convalesce. As the years go on, however, Dora begins to despair, and Persephone must comfort her. In an attempt to survive their endless incarceration, Dora and Persephone adapt alter egos, Dorph and Porph, who regularly enact fantasies. Porph takes on the personification of Doris Day, while Dorph celebrates triumphant historical women, often in the guise of a man.

Jones uses shifts in time, backward and forward, to cover the long period of the women’s imprisonment (they are not released until the 1970s). She does not shy away from showing moments of madness, but always there is the unspoken thought that the cruel, uncaring system is as much to blame as the women themselves. Through all these years Jones threads a surprising web of comedy. Much fun is had with Porph’s obsession with Day and Dorph’s stoic tolerance of it. The scene that gives the play its title is one of such originality, charm, and sadness that at the performance attended the audience cheered.

John Keating directs the tricky material with great sensitivity. Moloney’s Dora is an appealing combination of common sense and eccentricity, demonstrating a dramatic strength in the play’s darker moments. In contrast, Pickup’s Persephone has a touching fragility, a wacky comic strain, and finally a loving sympathy.

“Airswimming” may be about forgotten women, but it’s not a play that’s easy to forget.