Inventive 'The Dance and the Railroad' Makes for Memorable Theater 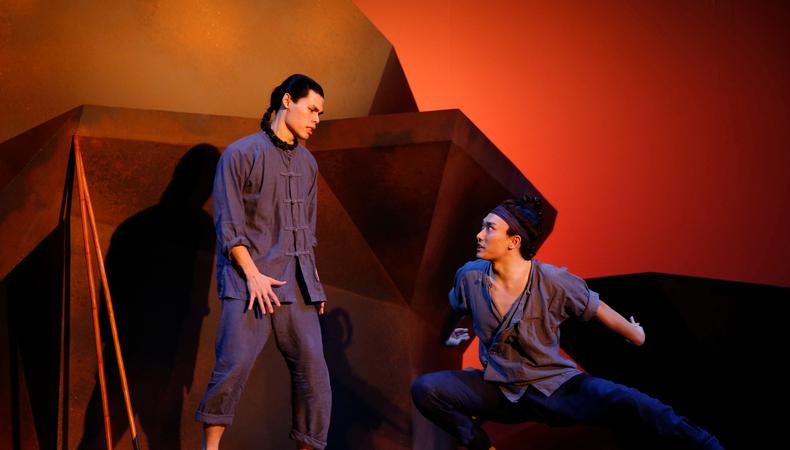 David Henry Hwang’s 1981 play “The Dance and the Railroad” is an unlikely but fascinating mixture of Chinese opera staging techniques and a naturalistic drama about two Chinese immigrants who are workers on the building of America’s transcontinental railroad in 1867. Only his second produced script, it shows a talented writer who is already a secure craftsman. Signature Theatre’s elegant and disciplined revival, under May Adrales’ confident direction, is most welcome.

Twenty-one-year-old Lone lives up to his name, keeping aloof from his fellow Chinese toilers and their off-duty drinking and gambling, preferring to spend his evenings alone in the mountains practicing opera, a trade he began learning at 10 in China when his parents sold him to a training school. As the immigrant workers have gone on strike, angry that they have longer hours and lower pay than their white compatriots, he suddenly has time on his hands. Enter Ma, three years his junior and very full of himself, who wants Lone to teach him to be a performer. The contemptuous artist initially has no use for Ma, calling him an “insect” and a “dead man,” but the young man’s persistence wears him down. Ma has high expectations: He wants to be capable of performing the role of Gwan Gung, a noble and righteous warrior figure in Chinese culture. Appalled, Lone explains that such a thing would take years and years of practice. At best Ma might be fit to play the second clown. As Lone pushes Ma with lessons, the men jockey and spar. Then suddenly the strike is over, and the small wage increase attained dashes Ma’s dreams of making his fortune on the railroad. He gives up his artistic quest, but not before he convinces Lone to join him in enacting his life as the hero of his own opera.

Clocking in at a mere 70 minutes, the play is a model of economy. In swift strokes Hwang creates two intriguing, multidimensional characters, and Yuekun Wu and Ruy Iskandar bring them thrillingly to life. Wu vividly embodies Lone’s hauteur and projects a vibrant inner intensity, his mesmerizing command of movement total. Iskandar excels at Ma’s boyish arrogance while retaining a vulnerable naiveté and innocence. He does especially well with a monologue about Ma’s second uncle, who hated and feared locusts and took it out obsessively on grasshoppers. Together, the two men make the opera of Ma’s life the evening’s high point.

There are occasional moments when the drama feels a bit intellectualized and holds us at a distance, but the play always recovers quickly. Inventive and deeply felt, “The Dance and the Railroad” is memorable theater.