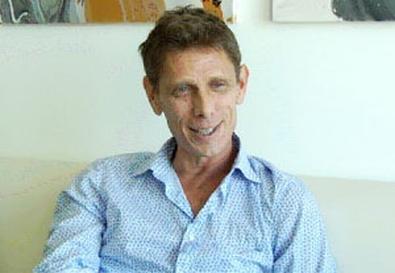 Photo Source: Michael Gordon
Jamie Harris is friendly and chatty and patently a sports fanatic. Clearly, then, he must have put on a very different persona—also known as acting—when being cast for "Rise of the Planet of the Apes." In the prequel, out this week, Harris plays a slightly autistic human imprisoned by the apes. "I'm a nonagressive human, possibly the only one, so my life is spared by Caesar the ape," reports Harris of his role. That, of course, leads to numerous scenes with the apes in this state-of-the-art special-effects film. And yet, there's good old-fashioned acting to be done.

Though born and raised in Britain, Harris has gravitated stateside for much of his career. He appeared Off-Broadway—in Patrick Marber's play "Dealer's Choice" at the Manhattan Theatre Club and in "Some Voices" and "Comedians" at The New Group. Harris made his film debut in "In the Name of the Father." He has appeared in "Lemony Snicket's A Series of Unfortunate Events" and "The Prestige," and he can be seen as Popeye in "The Green Hornet" and as Patrick in "Mr. Nice."

Harris spoke with Back Stage about filming the latest "Planet of the Apes," his process on a set, and his most unusual roles thus far.

Back Stage: For "Rise of the Planet of the Apes," you showed up the day before shooting. What did you first notice about the set, and how did you cope?

Jamie Harris: It was a fantastic set because it's a whole new way of filming. Modern films are so amazing because they're so technical. The acting, you're always trying to keep up with what's going on. Anyway, I showed up on set, and there were these wild cages. It was a very dark set, the one I was in. And I just see this whole process I'd never seen before. I'd done movies with green screen, but this was very different, with the amount of technical stuff going on. Andy [Serkis, playing the ape leader Caesar] had this tight suit on and all these green dots all over his body. Then he had a little camera going on. And there were all these different characters. Each actor was playing a different ape. It was quite intense, but in a fun way. It's always important to keep a certain amount of levity.

Back Stage: What do you do when you first get on a new set? You unpack, you string your good-luck charm over your mirror…?

Harris: My good-luck charm is usually just a cup of coffee. You meet the makeup people. You don't want to start off with an argument. And they're usually really good-fun people. And then you find out the scoop of what's going on. They'll always tell you what's happening: who's chaos, who's trouble, who's ridiculous. You find out all the little stories, and then you walk on the set and you see it yourself, in action, and they don't realize you already know, but you do. When you get a DVD, always watch the "making of," 'cause that is very informative and usually as dramatic as the actual film, and quite often it's better. And each film is completely different. "Mr. Nice" was a much smaller budget—it was like $10 million, which is still a good budget—and that was a completely different sort of production. It was a real story dealing with the 1970s about drug dealing. [Writer-director] Bernard Rose was all about improvising: You could say what you liked, and everything is good, and that is great for an actor, just to be offered to basically do what you like, as long as you're in the character.

Back Stage: What's the most off-type you've ever been cast as, and what are you hoping to be cast as?

Harris: Goddammit, I'd like to play a priest. For television, I often play the bad guy. I always find that shocking, because in theater I often play the sweeter character, or the character the audience will have some kind of empathy with. But in film, I often play the character the audience wants to see killed. The weirdest character I've ever played? In theater I once played this great character. The play was called "Some Voices," by Joe Penhall. I played this character that was psychologically backward. In the beginning of the play, I come off my meds. It was one of the most fun roles to rehearse, because you could get away with anything, as long as you justify it. It was one of the characters I adored the most. Filmwise, in "In the Name of the Father," I played a hippie, an aggressive hippie, a meat-eating hippie, which in the '70s was unheard of. In between takes, I would nip to the local shop in Dublin, where we filmed it, to get a packet of cigarettes. The amount of insults I got for wearing this hippie outfit! I had this long hair and these ridiculous clogs, so I couldn't run. And I was harassed by these little kids who thought my clothes were ridiculous. Indeed, they were right. But then, being shot in Dublin, and I had an English accent, they were kicking me, really coming out with some slanderous remarks about the English, which I had to take. That was one of the weirdest journeys to get a packet of cigarettes I've ever had, I can tell you. I couldn't go quickly, 'cause the clogs would fall off, so I got abused by 6-year-old Dubliners—which for any other country would be like a 15-year-old.

Back Stage: You had excellent training at RADA [The Royal Academy of Dramatic Art in London]….

Harris: …To be honest, I left RADA quite soon after the first year. Rex Harrison once said, and I think he was completely right, that there is no knowledge you can learn as much as being on set. It really is a craft of trial and error, understanding things. Theater isn't, but film is. In theater there's a lot of craft. But again, it's a game. You do small plays, you understand the audience reaction. There is nothing like experience. And there is no acting they can teach you when you're first on set and you have to realize that although the scene is between two people, there are 50 people behind camera, watching, and then you slowly realize as you grow up that they're not actually watching you at all. They're all taking care of their own things. But the first film I ever did was "In the Name of the Father," and my first scene was with Daniel Day-Lewis. I was very nervous, let's put it that way. He'd already won an Academy Award for "My Left Foot." I was like, "Why does my first scene ever in a film have to be with this guy?" What I did was—it was genius—I got to set early, I found a place, and I sat down, 'cause sitting down takes care of a lot of nerves. And then you realize, you're acting with him, and he's such a phenomenal actor, that you get totally pulled into the moment, and you're unaware of anything else. And I thought, naively enough, that every film would be like that: Every film was going to be fantastic, and I was going to be acting with Daniel Day-Lewis in every film. Then my next film was an absolute disaster. I won't say what it was. So rather than being daunted when you're acting with someone wonderful, actually it makes life a hell of a lot easier.

Back Stage: What is the one great lesson you carry with you?

Harris: I think, for me, when you do any kind of a scene on film, you take any kind of technique that is going to help you in that moment. For example, if you're acting with someone fantastic, like Daniel Day-Lewis, techniques don't matter; as long as you listen to what is going on in the scene and you react to what is happening, you're playing the part. But with dodgy—and dodgy means rubbish—scenes, that's when you have to employ a lot of craft and technique, because you're going to have to create something that quite simply isn't existing in the scene or in the moment. My father [Richard Harris] always used to say, and I always held to this, that theater is acting and film is reacting. You work your character out, the throughline of your character—what little idiosyncrasies he has, what fears he has. I always start off with fears. Then there's more humility to him.

Back Stage: That made your character in "Planet of the Apes" easier to develop.

Harris: Everyone's afraid of a 120-foot gorilla. That was simple. And I was playing someone who has massive trouble communicating with humans, and therefore he sympathized with the animals. So you could see a quietness to him that I loved, which is great fun to play—someone who's been abused, someone who's feeling a lack of confidence with other humans. Which we all have, so you just tap into that a little, and you're away. That and five cups of coffee. What could go wrong?