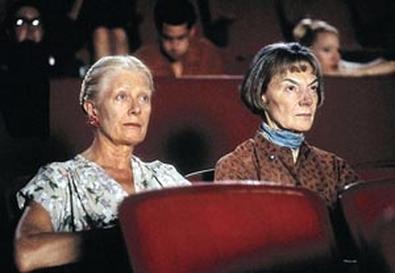 Photo Source: HBO/Photofest/Lorey Sebastian
Vanessa Redgrave. Her work is metaphysical. I swear to God, when she drops into character, her molecules get rearranged.

I had written a segment for the HBO film "If These Walls Could Talk 2." I was set to direct it, and Vanessa and the marvelous Marian Seldes were cast to play an older lesbian couple who lived in a time and place when the closet was the norm. Marian's character dies, and Vanessa must stand stoically by while her lover's relatives show up and strip the house of her things.

When we first met before the shoot to talk over the script, I had no idea what I was in for. Vanessa has a reputation for being a bit unpredictable at times. During the run of "Orpheus Descending," she decided one night to make her entrance stark naked. I'm sure that the stage manager had a seizure in the booth, and her fellow actors probably dropped their lines along with their jaws. But this is what makes Vanessa so brilliant: her willingness to be exposed.

She didn't want to wear any makeup for her role in my film—not even a base. The D.P. and the makeup person were baffled, and we all talked about getting her to change her mind. But she knew what she was doing. She didn't want her skin to be covered. She wanted the camera to have direct access to whatever miraculous things she was about to do with her face.

Before I go on, you also need to know that as profound as this all sounds, Vanessa was still an absolute kick to be around. She had me playing charades with her between setups. She practiced irreverence because she knew it was death for an actor to take herself too seriously. She taught me that the deeper you have to go in the work, the more you need to come up for air and goof around. Take note of this. There's a reason that the verb "to play" applies to acting out a role.

So. We're shooting this scene where Vanessa's character has retreated to her bedroom while her lover's relatives continue to paw over her things. She's sitting on the bed that she shared with her beloved for 30 years, and she can't contain her grief any longer. Our budget confined us to shooting in an actual house rather than a soundstage, so we were all crammed together in this very small room, crew and all. I was sitting by the camera, just a few feet away from Vanessa, watching her break down. I'm emotionally detached when I direct. But when the film started to roll, Vanessa let out a sob of grief that was so raw, so fierce, so real that I felt my own molecules get rearranged. She shook me to the core of my solar plexus, and after we checked the gate, I was still shaking. I ended up having to take a walk out to the trailers and have myself a good hard cry.

But in the middle of this astounding piece of acting, Vanessa performed an act of grace that explains more than anything why she is one of the greats. During the scene, a little girl walks into the bedroom, and Vanessa's character has an exchange with her. We had to shoot the girl's coverage first so we could release her for the night. So Vanessa had to play the scene to an adult stand-in—a woman who was a little person. The woman was so in awe of Vanessa that she kept missing her mark and screwing up the takes, so Vanessa had to call up her grief again and again and again. When we were finally done, Vanessa was exhausted and the poor woman was a wreck. Most stars would have immediately retreated to their trailer without another word to this incompetent underling. But Vanessa looked the woman in the eyes, gently took her hand, and said, "Thank you so much for working with me."

Jane Anderson is a playwright, screenwriter, and director, as well as a former actor. Her screen credits include "Normal" (from her play "Looking for Normal"), "The Baby Dance," and "The Prize Winner of Defiance, Ohio." Her plays include "The Quality of Life" and "The Escort."