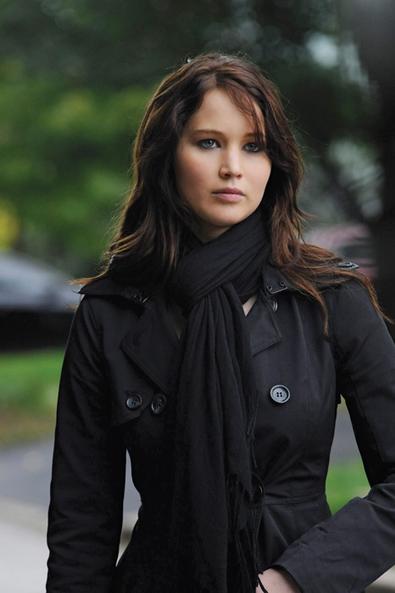 In “Silver Linings Playbook,” Jennifer Lawrence plays Tiffany, a young widow who attempts to mute her grief by sleeping with everyone at her job—yes, the women, too. As she describes herself in her unfiltered way, “Yes, I’m Tommy’s crazy whore widow minus the whore thing sometimes.” She builds a tenuous friendship with Pat (Bradley Cooper), a former teacher fresh off a stint in a mental institution, and at one point he throws her past back in her face. Rather than wilt, she gets into his face and says, “There’s always going to be part of me that’s sloppy and dirty, but I like that. Can you say the same thing about yourself?”

It’s a moment that makes audiences cry or cheer—sometimes both—and shows that once again, there is nothing sloppy about Lawrence’s performances. The 22-year-old actor beat Olivia Wilde and Rachel McAdams for the role of Tiffany, and much has been made of the fact that she auditioned for director David O. Russell over Skype. Lawrence says she was nervous, but not for the reasons one might think. “Well, as I am the least technologically inclined person ever, I was definitely anxious about doing the audition over Skype; I had never done anything like it before,” she says. “Luckily, David started by having me jog in place alone in my apartment, which somehow helped ease some of the initial awkwardness, and we were able to jump right into the audition.” Once they started, she adds, “I actually found it to be more fun and interactive than going on tape, and I was happy that David was able to be involved. Either way, I guess it worked out!”

That’s an understatement, considering Lawrence has been considered the front-runner for lead actress since the film premiered at the Toronto International Film Festival in September. The actor came straight to the Philadelphia set from her grueling shoot on “The Hunger Games,” where she jumped into dance rehearsals with Cooper (the film ends with a crowd-pleasing dance number). Other than the intense choreography, she notes, “I didn’t necessarily do any ‘research’ for Tiffany. Since she isn’t diagnosed with any specific disorder or illness, there was nothing concrete to attribute her behavior to. She’s so complex and mysterious, even to herself, and I wanted to keep a bit of that mystery alive.” Though the film is based on a novel by Matthew Quick, the avid reader opted not to finish the book. “I started to read the book but actually found it to be more distracting than helpful in terms of ‘building my character,’ ” she says. “Truly, the evolution of Tiffany was a collaboration between myself, David O. Russell, costume designer Mark Bridges, and Bradley Cooper.”

There’s been a lot of chatter about the fantastic chemistry between the leads, and Lawrence and Cooper have already reteamed for “Serena,” due out next year from director Susanne Bier. “Working with Bradley is so easy; he’s an incredible actor, and he makes me better,” says Lawrence. “I think our chemistry comes from being comfortable around each other and also from our characters. In ‘Silver Linings,’ we play two explosive people, so it makes for an equally explosive relationship.”