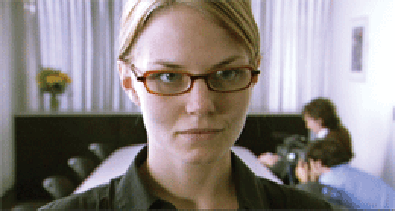 Actor Jennifer Morrison has a fairly fortunate dilemma. A recognizable face from movies such as Mr. & Mrs. Smith and her role as Dr. Allison Cameron on Fox's popular medical drama House, Morrison excels at portraying intelligent, complicated women. Of course, when you're so good at playing good, it can be difficult for people to see you in another light. Which is part of what makes Morrison's weird and wonderful performance in the independent feature Flourish all the more appealing. Morrison plays Gabrielle Winters, a childlike young woman who agrees to a last-minute babysitting job with tragic results, in a film that combines several seemingly random subplots into a twisty comedic thriller. Prone to malapropisms and making up words--her vocabulary

includes "logicalistically" and "realistical"--and unable to relate to others in a traditional sense, a character such as Gabrielle creates a fine line for any actor to walk. As if the role weren't challenging enough, Morrison was also making her producing debut with the film, all while coming off the first season of a hit show.

Fortunately, Morrison had an ally in writer-director Kevin Palys, whom she has known since they attended the same grade school in Chicago, though the two didn't become close until high school. "I know it's a cliché actor thing to say, but I really had very few friends in high school," Morrison admits with a laugh. "I was always alone at lunch, and one day Kevin saw me and invited me to sit with him and his friends. They were always so mischievous; they were always pulling pranks but were smart enough to get away with them. I would be mortified by their behavior, but they were the only ones who would sit with me at lunch." She was already active in drama and even played Palys' wife in a production of The Beaux' Stratagem. Palys was impressed by the talent she showed at such a young age. While Morrison went on to perform at Steppenwolf and landed roles in films such as Stir of Echoes and Urban Legends: Final Cut; Palys enrolled in USC's film school.

In August 2003, Palys told Morrison he was creating a project with her in mind. "He said, 'I'm writing this thing for you. You always get stuck playing somebody's girlfriend,'" she recalls. "He grew up watching me onstage, so he knew a much wider spectrum of what I could do as an actor. It was such an honor that he would think of me to do that." Echoes Palys, "I knew she was ready for a challenge. I told her to her face once, 'I'm glad you got all these things, and I understand why they get made and what they do for someone, but frankly they're beneath you.' I knew it was time for her to move on, and I egotistically wanted to be the one to showcase it."

First they had to raise the money, which proved to be a start-and-stop process. "We went down several different avenues with different producers and different investors when we decided, 'Let's just raise the money ourselves,'" says Morrison. "People really responded to the script, but they always wanted to do it their way. What they didn't see was that the script doesn't work any other way except the way it's written." Palys' father works in investments and helped find several private investors to contribute to the film.

In the meantime, Morrison landed a role on a new Fox drama about a cranky doctor and his team of bright young medical experts. She found herself juggling long days on the set of House with preproduction on Flourish. "I would be on-set, and all I could think about was the 800 phone calls I had to go make," Morrison recalls. "I'd be running in and out between takes with five minutes to get on the phone with people."

There's little doubt Morrison was a hands-on producer, helping to gather a cast that included character actors Daniel Roebuck--Morrison's co-star in the 2004 film The Sure Hand of God--and Connie Ray, as well as Morrison's House co-star Jesse Spencer. "She was vital in securing the cast," Palys raves. "She could make a phone call and say, 'Look, it's going to be this kind of movie. You'll be paid very little up front, it's not that many days, will you do it?' Whereas if I had to make that call, it would be impossible." Morrison also enlisted the help of House casting director Amy Lippens and her associate Stephanie Laffin to cast the pivotal role of Lucy, the combative young girl Gabrielle is babysitting. Palys saw a headshot of actor Leighton Meester, and Lippens' office brought her in and put her on tape. "They really helped us have a proper, official forum to bring in actor, rather than just auditioning people at my apartment," he notes. According to Morrison, the film was cast perfectly. "We weren't thinking obnoxiously; we weren't going after Tom Cruise or anything," she remarks. "Basically everyone that was our first choice for a role, we got."

The 18-day shoot began in Los Angeles in May 2005 on Morrison's hiatus from House. "I took 10 days off right before we started shooting. I just needed space from playing a smart character like Cameron and having this business mentality of producing the film," says Morrison, who also spent that time journaling the character of Gabrielle. It was, by all accounts, a fast and fun shoot. "I was in New York for the upfronts; I flew into town at midnight and began Flourish at six in the morning," she recalls. "We didn't have trailers, we were all gathered in this little tent." Still, the atmosphere was electric. "A lot of times when you have limitations, it squeezes creativity out of you," she observes. "I feel that's one of the problems with a lot of the big movies that come out and are really bland and boring. There's such expense and waste, and no one's forced to be creative with what they have." Morrison was particularly thrilled to collaborate with Palys as a director, someone she remembered setting off fireworks while she hid behind a tree as a kid. "He was so at home on-set," she notes, adding that the experience of playing such an intense role was also intimidating. "It was cool and exciting and scary as hell. You look at a role like this, and you know you could totally destroy it. If it becomes too self-conscious, it's annoying. If it's too subtle, it's nondescript. Luckily, Kevin and I love and trust each other, and I knew he could help me find that balance."

Postproduction was completed on a G5 using Final Cut Pro at a workstation assembled in editor Peter Samet's apartment. On Jan. 3, 2006, Palys received word that Flourish would make its world premiere at the Cinequest Film Festival in March 2006--news that thrilled the team. "Even though we were really proud and pulled it off and had it come together in a way we were happy with, it's nice to have a respected institution recognize it," she says. "We felt, like, it's hopefully the beginning of a long festival run."

As for producing, Morrison says she's absolutely up for another go at it. "There's so many unbelievably talented people in this industry, and so often all you hear are horror stories," she says. "And it doesn't have to be that way. I feel, like, if you treat people with respect and feed them well, you'll have a really hardworking group of people. And I feel, like, the more I can be a part of creating an environment where that can happen, the more good things can come of it."

Flourish will be playing at the Cinequest Film Festival in San José March 3-4. For tickets and more information, visit www.cinequest.org or www.flourishmovie.com.