Jerry Springer: The Opera (In Concert) 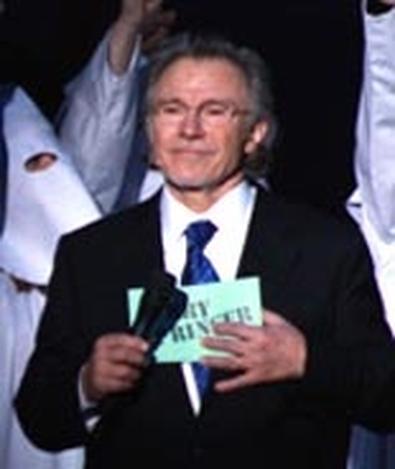 Jerry Springer: The Opera is very ambitious and very slight. It could have been an extended sketch amounting to an hour of social satire, or it could have been expanded into a work so monumental one can see it under the directorial spell of a Franco Zeffirelli, especially because of Act 2, when the eponymous talk-show host finds himself shot through the chest, delirious, and in hell, forced to moderate a spirited battle between Jesus and Satan. There's plenty here to offend delicate sensibilities: Act 2 is why ultraconservative extremists stood protesting outside Carnegie Hall. Yet one wishes they were bright enough to rail against something shocking. Jerry Springer: The Opera really isn't.

In the nonsinging title role, Harvey Keitel's strutting entrance through the house brought trouble: He was so wooden I suspect it was intentional. Still, for all of the hooting from the chorus of audience members before Springer arrives ("Oh for fuck's sake, we are ready"), an uncharismatic actor at the center of the circus seems counterproductive, even if Springer is a cipher and the show really isn't about him.

Then there's Montel (full-voiced Lawrence Clayton), who tells girlfriend Andrea (excellent Emily Skinner) that if she loves him, she'll indulge his diaper wearing. After Andrea's aria "I Want to Sing Something Beautiful," the chorus nods its approval of Montel: "Poop your fucking pants!"

No wonder Springer's inner Valkyrie (Patty Goble) appears to sting Springer's conscience. How can he live with himself? How could he degrade mankind so willingly? Yet it's the commercial breaks — chorally sung and featuring a blizzard of truly tasteless ads — that are the satirically sharpest parts of the work, although Mel Brooks wants to know when he can have his tap-dancing Ku Klux Klan members back. (Don't ask.)

Rather than analyze Springer as a symptom of declining society, in Act 2 the authors take a pass. The music may be brilliant — the first duet between Satan (Bedella) and Jesus (Clayton, in a diaper) raises the bar for 21st-century vocal dynamism — but the idea of Satan wanting Jesus to apologize and demanding that Springer televise it from hell mistakenly elevates Springer to a status beyond his cultural ken. Jerry Springer would never referee a good-versus-evil fight — Oprah would. God (Grooms, in tennis whites) would be irrelevant with her around.

For some, The Jerry Springer Show is a haven for trailer trash and the goons who love to watch them. Jerry Springer: The Opera is where those goons go happily to swoon and die.