How does an actor get cast in the most highly anticipated movie of all time? According to John Boyega, the leading man in “Star Wars: The Force Awakens,” breakthrough success in the entertainment industry can’t exactly be replicated. “The worst thing actors can do is listen to John Boyega,” he says, “and go, ‘I’m gonna walk in these footsteps.’ ” The acting profession, alas, is not that straightforward.

But as someone who endured close to a dozen auditions and beat out countless others for the coveted role of the lightsaber-wielding Finn, Boyega has plenty of advice for aspiring stars. “People in this life predominantly—and I’ve been there before—don’t get to do what they enjoy for a living. It’s very important to realize there’s a certain element of self-love where you decide to own your life and go get the career you want.” In the online era, he adds, actors must explore any and all angles to arrive at their own definition of the top; it’s all about developing taste and following passion. “Geek out about stuff, man!” he advises. “Be passionate about it and love it.” 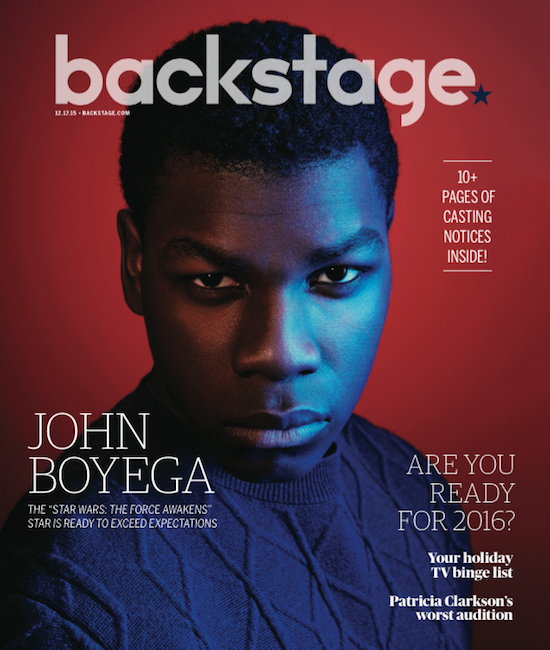 Boyega fits the definition of “geek” on multiple levels. Born to Nigerian parents in Peckham, London, his single-minded enthusiasm for acting began in school plays and continued throughout several theater schools and institutions. He’s a comic book and video game aficionado—currently playing Star Wars Battlefront during brief breaks from press junkets—and longtime film buff. (“A single-disc DVD would disgust me,” he says of his obsession with the behind-the-scenes aspects of filmmaking. “Why would you get a movie and not show me how it was done?”)

Charming onscreen and down-to-earth in person, Boyega comes off as the most confident of geeks. When asked about alternative careers, he exclaims, “I don’t have time for no plan B. You might as well just do plan B then.” And don’t go labeling the 23-year-old Brit inexperienced. A run-of-the-mill theater student doesn’t emerge from complete obscurity to star in a multibillion-dollar movie franchise; nor did Boyega’s leading role in the 2011 British alien invasion romp “Attack the Block” provide a direct steppingstone to the beloved “Star Wars” universe.

“A lot of people when they talk about me go, ‘From “Attack the Block” to “Star Wars.” ’ Hell no!” Like any working actor, his early film career has been peppered with rejections and lower-profile projects (including strong performances in “Half of a Yellow Sun” and “Imperial Dreams”). But an impressive debut in “Attack the Block” certainly helped his prospects; Boyega brought a combination of youthfulness and insufferable machismo to the sci-fi horror-comedy, the kind of calibrated charisma that makes people sit up and take notice. 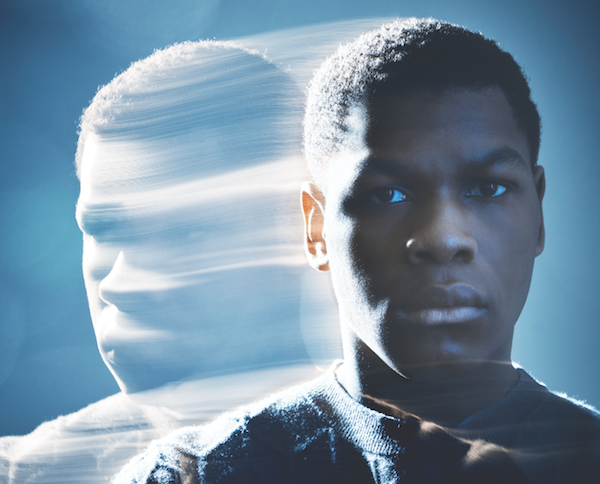 “He was just immediately impressive,” says Joe Cornish, the film’s writer-director. “We were looking at pretty young kids, so for us it was important that they took the craft seriously. He has a gravitas despite his age...real gravitas and focus. I think there’s just a certain magic, isn’t there?

“What was so impressive in such a young actor was his ability to shape the role,” he adds. Despite filming out of order, Boyega’s Moses believably transitions from petty criminal to alien-slaying hero. “Like any good actor, John wanted to find all the dimensions of this character and make sure there’s change.”

The actor’s commitment to character development is evident in “The Force Awakens.” Despite the antispoiler brouhaha surrounding the saga’s seventh chapter before its Dec. 18 release, Boyega is happy to discuss Finn, a storm trooper serving the new First Order who “decides to lead his own path.” Renouncing his subservient ways, Finn encounters Rey (Daisy Ridley) and Poe (Oscar Isaac) as they are swept into an epic conflict with the sinister Kylo Ren (Adam Driver). It’s the first time in the “Star Wars” canon, Boyega notes, that a member of the Dark Side crosses over to the Light. “That’s what makes him the frickin’ sickest guy in the galaxy.”

As the posters and trailers suggest, Finn embodies the good guy, brandishing the blue lightsaber originally belonging to Luke Skywalker (Mark Hamill) in George Lucas’ 1970s- and ’80s-era installments. But as Boyega explains, he’s anything but the typical movie hero. “What makes me love Finn so much,” he says, “is for years and years, the definition of a hero has been such BS.” Not only was the valiant protagonist a handsome, able-bodied, white male—a type that is gradually receding in mainstream culture, as “The Force Awakens” proves—he always exuded an unwavering sure-footedness, both unrealistic and unexciting to Boyega.

“It’s a bit of a narrow kind of definition, and for me it was a conscious choice to keep Finn as normal as possible,” he says. “He doesn’t consider himself a hero, which is something I quite like. Have you seen the way Superman flies around? That man knows he’s a freaking superhero! Chill, man.

“I want a character to be in over their heads,” he continues, citing such examples as Shia LaBeouf’s unexpected turn in “Transformers,” Daniel Radcliffe as Harry Potter, and Chris Pratt in “Guardians of the Galaxy.” “For me, that’s an inspiration to see a guy who’s, like, in ‘Parks and Recreation’ come on and be a big hero. But in a very normal, human way.” Dynamic, outside-your-comfort-zone entertainment, Boyega says, is about complex, doubting characters who have heroism thrust upon them. “Otherwise, who do you really root for? We all know that Batman is going to kick ass—there’s no reason to root for him. That’s why a small percentage of us rooted for the Joker.” 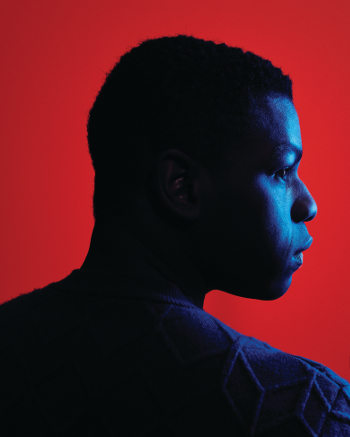 Relatability is important, too. “Finn is a representation of what the frick we are,” he adds. “I’m the audience. And I learned that from Harrison [Ford].” If a character being dragged into an intergalactic war sounds familiar, it’s because writer-director J.J. Abrams consciously calls back to all six previous films in “The Force Awakens.” Ford’s cocky Han Solo made the original space opera, with all its Wookiees and beeping droids, accessible for audiences; as Boyega says, “The reason I loved Han Solo so much is because he represents us.”

Ford’s performance, in fact, helped Boyega book the role in more ways than one. “Before my last audition, there was a lot of pressure to come in with a good performance,” he remembers. “And I went back and I watched Harrison Ford’s audition with Mark Hamill on YouTube for the first ‘Star Wars’ movie, and I really tapped into that energy. I don’t know what it was that I took from it, but there’s an energy to ‘Star Wars’ that is very specific and that Finn embodies a lot. It’s an over-the-top, corny type of Hollywood style that worked with ‘Star Wars’ and doesn’t work with any other project.”

That audition tape—what Boyega calls a “gold mine”—is one example of the kinds of resources that today’s working actors shouldn’t underestimate. “You’ve got to be a sponge,” he says. “In terms of acting, a great foundation is always information. If your foundation is wack and rocky and muddy and you’re trying to build a five-star hotel, forget it. Go back. Dig deeper.”

Aspiring artists also have to be sure they know what they’re in for, and want it badly enough. “The footsteps are your own and it’s about whether you’re crazy enough to single yourself out,” Boyega says. “You want to be a part of this kind of industry, you gotta know it’s not like a doctor, who has a limited amount of options based on facts, science, skills.” Options are limitless in such an arbitrary world, and the sooner actors embrace the absurdity of both the industry and the undertaking itself, the better.

“You either tap into that insanity or you be one of those logical people who just get burned by the experience.”

In the end, entertainment is about sitting in the dark pretending, for example, to visit a galaxy far, far away. “People when they’re in the cinema—have you ever looked around?” Boyega imitates an awestruck spectator, mouth agape, an expression he himself knows well. “Like, ‘Star Wars’ is not real. Think about it. It’s not real. It doesn’t exist at all in terms of the real world. But it’s so important.

“So it’s, like, be crazy, man! Tap into the insanity. And hope for the best.”

This interview originally ran in the Dec. 17, 2015 issue of Backstage Magazine. Subscribe here!

Jack Smart
Jack Smart is the awards editor at Backstage, where he covers all things Emmy, SAG, Oscar, and Tony Awards. He also produces and hosts Backstage’s awards podcast “In the Envelope” and has interviewed some of the biggest stars of stage and screen.
END_OF_DOCUMENT_TOKEN_TO_BE_REPLACED