John C. McGinley On His 'Dreamy' 'Glengarry' Co-Stars and Returning to the Stage 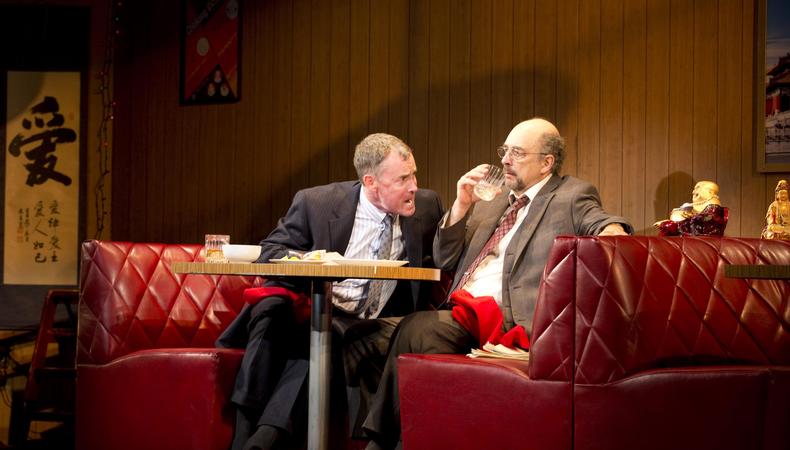 The last time John C. McGinley was on Broadway was 26 years ago. But ask him what it's like returning to the Main Stem, and he knows exactly what to say.

"It's the most exciting thing I've ever done," he says assuredly. McGinley stars as Dave Moss in David Mamet's "Glengarry Glen Ross" on Broadway, opposite Al Pacino and Bobby Cannavale. The revival, directed by Daniel Sullivan, runs through Jan. 20.

The actor, known for his work as Dr. Perry Cox on "Scrubs," chatted with Backstage about his "dreamy" co-stars, how he prepared for the role, and his big break.

Why did it take you so long to come back to Broadway?
John C. McGinley: The first time, we did a traditional out-of-town warm-up for a show that I was doing with John Lithgow and George Segal, which had originated up at the Long Wharf Theatre, called "Requiem for a Heavyweight." We brought it to town all tight and ready to go. We did two weeks of previews. We opened on Thursday night. The reviews came out Friday, and we closed Sunday. And it was too emotionally expensive for me. The tax was too great. I didn't have the spine. It hurt so much that I didn't want to do it anymore, I didn't want to be a part of that kind of disposable love. It was too much…The guy who ran The New York Times at the time, Frank Rich, panned it and we closed on Sunday and I found out watching Sue Simmons Live at Five in my apartment on Friday night. It stunk. It just hurt too much! I decided you can have your ball on your playground and you can play with it. It just seemed too random. Even as I'm telling you this story, it gets me going.

So what made you come back?
McGinley: This is a different circumstance to come back in with Al and with Daniel Sullivan and Bobby. This is kind of a different guarantee if you will…I didn't want to move back here, rehearse something for five weeks, and take one on the chin again. I wasn't interested. If that sounds like a coward, then I'm a coward. I don't care.

Were you familiar with "Glengarry"?
McGinley: I second-acted the original production two nights in a row when we were all just broke-ass and we couldn't pay for a ticket. We used to come up and wait for you guys to come out at intermission and then we'd sneak in. So I saw the second act of the play two nights in a row, but I never saw the first act.

What has it been like working with this cast?
McGinley: Dreamy. The phone rang in August, and you wouldn't put this on your bucket list because it would be an exercise in absurdity. The phone rang, and they said you've been offered the role of Dave Moss in a Broadway production of "Glengarry" with Al Pacino and Daniel Sullivan directing. My knees buckled. You can't buckle my knees, but you buckled them when you made that phone call to me. So I have a rehearsal space at the house that I built during the run of "Scrubs." I hired a kid, and he came out and for four hours a day, six days a week we ran the words. It yielded huge dividends.

You actually started your career onstage, as an understudy in "Danny and the Deep Blue Sea."
McGinley: Yeah, I was understudying John [Turturro] in "Danny." John is a stud, and he never got sick and he never even missed performances. John finally went to do "Desperately Seeking Susan," and I got to go on for a whole weekend.

And then you were discovered, right?
McGinley: Somebody came down from Oliver [Stone's] office to see John, and I happened to be on that night and it was an assistant to an assistant to an assistant casting person and they came backstage and asked, "Do you want to come up and audition for 'Platoon'?" And I did. At that time, I got "Third guy on the right," and then the film was postponed two years and two years later, Oliver said, "Do you want to play Sgt. O'Neill?" I was doing "Hamlet" with Kevin Kline at the time over at The Public. I had to go into Joe Papp's office and ask permission to leave … So I go into meet Mr. Papp, and I said, "I want to go do a film with Oliver Stone but not at the risk of being cast out of here." His voice was way back in here and he had a cigar going and he said, [impersonating Papp] "Mac, go. Tell Oliver I say hello. We're going to do 'Hamlet' again in your lifetime." I almost started crying so he gave me his blessing to go do "Platoon." Here's the worst part of the story. Mr. Papp gave me permission to leave the play, and when I did, there was a revolution in the Philippines. We were postponed for six months. I sat in the apartment, watched Kevin do the most important "Hamlet"on these shores. I'm sitting there twiddling my thumbs…It's such a selfish actor thing but all we could think of was, Would you get your revolution over with already?

So when are you doing "Hamlet" at The Public?
McGinley: That ship may have sailed. But good to his word, Mr. Papp hired me to do the original production of "Talk Radio" and then I would go on to do the movie so he kept his word.

What are some things that you love about doing theater?
McGinley: Nobody can call cut. There's no safety net. That curtain goes up on my scene in the first act with Richard [Schiff] and it's go, baby, go time.

Will you be coming back to the stage after this?
McGinley: Yes. Guaranteed.

Do you have any advice for Backstage readers?
McGinley: Backstage! We used to all get Backstage and read the summer stock auditions.

Did you ever book a job?
McGinley: I worked at the [Merry-Go-Round Playhouse] in Auburn, N.Y., doing summer stock. I got my Equity card from an audition out of Backstage. We did "Guys and Dolls" and "Kismet."

Are you going to come back and do a musical?
McGinley: No. I'm not Hugh Jackman.

Have you ever not learned your lines?
McGinley: No. Never.