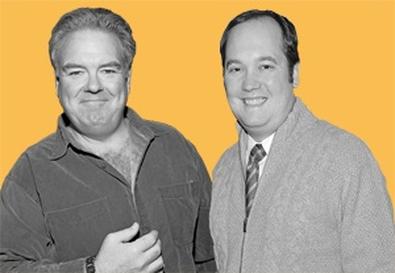 A new comedy archetype has emerged on shows such as "The Office," "It's Always Sunny in Philadelphia," "30 Rock," "Community," and "Parks and Recreation"—the object of ridicule. He won't ever get the girl—the character is almost always male—or the glory. He is barely allowed to speak. The only compliments he receives are backhanded. If anything positive happens in his life, it remains offscreen or is quickly ruined by the meddling of others. But he does not complain, nor does he fight back.

Sad-sack human resources representative Toby Flenderson, played by writer-producer Paul Lieberstein on NBC's "The Office," can be considered the model for this type. For seven seasons, Toby was the target of unrelenting hatred from Michael Scott (Steve Carell), who referred to him as "the worst human being ever," an "evil snail," an "animal rapist," and "the Antichrist," and who once told Toby, "I hate so much about the things that you choose to be."

So why would any actor sign up for such long-term abuse, let alone write such a role for himself, as Lieberstein did?

"I've always liked the downtrodden character on different shows," says actor Jim O'Heir, who plays hapless Pawnee Parks Department employee Jerry Gergich in the NBC comedy series "Parks and Recreation." "Before 'Parks,' I loved the Toby character on 'The Office.' I do like playing that type of thing."

"Parks and Recreation" creators Mike Schur and Greg Daniels, who had developed "The Office" for American television, knew that they wanted to cast O'Heir after he auditioned for the role of Swanson, which would eventually go to Offerman. Yet O'Heir's character was undefined in the show's first season, and there was no guarantee that he would have a place on the series moving forward.

"We didn't know who Jerry was for a long time," Schur said in an interview with The A.V. Club last year. "We just liked Jim O'Heir as an actor."

O'Heir has appeared on dozens of TV series since the mid-1990s, playing dads, doctors, detectives, and even a transvestite Santa on "Boston Legal." Being Jerry for four seasons has earned him the greatest recognition of his career so far.

"I took the gamble of doing it," O'Heir says, "because in my mind it wasn't much of a gamble. These are the people who did 'The Office,' and look what happened to those characters."

The writers discovered Jerry's identity early in the show's second season, during an episode in which the characters had to dig up dirt on each other. Jerry is told that not only was his mother arrested for marijuana possession, but he also was adopted. At that moment Jerry became the office punching bag.

"I was shocked," O'Heir says, "and yet in my mind it was like 'That's awesome!' Because if they're writing for me, that means they found who I am."

A 'Victim' of Good Writing

Like O'Heir, comedic actor John Lutz has become a victim of good writing. He was hired as an extra in the "30 Rock" pilot for scenes in the writers' room at the show-within-the-show. Over the course of the first season, Lutz appeared sporadically, delivering a line here and there. His character, who has the same name, was envisioned as a bully but gradually developed into the "Lutz" that viewers know now, a lazy loser who cries and whines, has no social skills, and generally disgusts whomever he is near.

Lutz says that Jerry and Toby are two of his favorite characters: "I love how awful people are to them for no reason." People are pretty awful to Lutz, too. His sexuality is questioned, he has no friends, and he has had surgery for not one, but two undescended testicles. Characters often shout "Shut up, Lutz!" when they walk into a room, even if he isn't speaking.

"The writers found out that it was fun to make me more and more pathetic every time they gave me a line," Lutz says. "Then it just started to snowball that everything was pathetic, which is really fun for me to play."

Lutz says that his improv training prepared him to be a team player on the "30 Rock" set without bruising his ego. He especially enjoys taking the punishment in an improv scene, feeding lines to the other players that will help them attack him.

"It's like you're fueling the fire and giving them all the ammunition they need to make fun of you more," he says. "And it's really, really fun."

Improv experience taught both Lutz and O'Heir to trust their fellow actors, and to set aside their doubts and insecurities for the greater good of the show. O'Heir says that when his co-stars apologize for being particularly mean to him in a scene, he reminds them, "You're not doing it to Jim. We're all actors."

The line between fact and fiction tends to blur, though, when these actors meet their fans in public. While most encounters are pleasant, O'Heir says that many people try to write their own jokes and make fun of him as Jerry when they see him. Lutz will hear someone shout "Lutz!" on the street, only to realize they are recognizing him as the character, rather than himself.

That Lutz shares his name and occupation with his character also caused confusion early on. For the first four seasons of "30 Rock," he was still working as a writer at "Saturday Night Live."

"I would have to go back and forth from writing on a job where I am actually Lutz, a writer for a sketch show," he says, "and then take the train over to Silvercup Studios to pretend to be a writer on a show, with my name, where all of the sets look the same as my offices. So it really was a good mind-fuck there."

Lutz has appeared in episodes of "Human Giant" and "The Good Wife," and he is also featured in the film version of comedian Mike Birbiglia's solo stage show "Sleepwalk With Me," which was a hit at Sundance earlier this year. O'Heir will next be seen in "Seeking a Friend for the End of the World," a film starring Steve Carell and Keira Knightley.