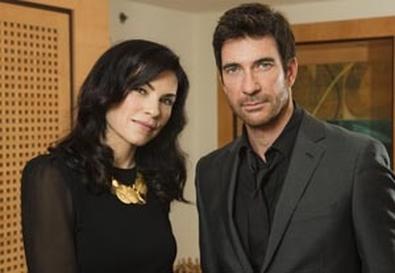 Photo Source: Blake Gardner
After various smaller roles, Julianna Margulies came to fame as nurse Carol Hathaway on "ER" and is currently the star of "The Good Wife." Dylan McDermott broke in with "Hamburger Hill" and then "Steel Magnolias," eventually hitting it huge as Bobby Donnell in "The Practice." He currently stars on "American Horror Story," Wednesdays at 10 p.m. on FX. The two friends compared a few notes on the occasion of Back Stage's 50th anniversary, looking back on their own growing successes.

Back Stage: What was your worst or strangest audition?

Julianna Margulies: My strangest audition was going in on a commercial for some sort of tourism company. They asked me to wear a bikini, and then in the audition they asked me to improvise building a hut on the beach with palm tree branches. I got to about the second branch and realized how absurd it all was, so I picked up my stuff and just said, "I'm not right for this," and walked out. I think that was 1990.

Dylan McDermott: There was a time when I was auditioning for "The Princess Bride." That was a life-changing audition. I was in New York, and I felt like I really needed to go for this role. Jane Jenkins was casting it with Janet Hirshenson, who from that audition became big fans of mine. Anyway, it was for [director] Rob Reiner. It was the swashbuckler role that Mandy Patinkin got. But I knew that I had to go all out for this role, so I decided, in Tom Cruise style, to jump up on the conference table and wield a sword—an imaginary sword, of course—and become this guy. It took a lot of effort to actually jump from the floor on top of the conference table and actually not slip and fall. But I did make it. I jumped on the conference table, I did the whole swashbuckler thing, and they laughed and thought it was the greatest thing. From that, they cast me in "In the Line of Fire" and "Miracle on 34th Street" and "The Cowboy Way," and they just became fans of mine. But it really was one of those moments where they were like, "Oh, my God, this guy just has to go" or "This was a home run." It worked out, and I felt like it was embarrassing but at the same time it worked in a strange way. But it showed me that I always have to go for it on some level.

Back Stage: What was the first "luxury" item you bought when you started making money as an actor?

McDermott: I bought a 1988 Porsche Targa. To me it blew my mind because I had never made any money before. I grew up very poor, with my grandmother; we lived, like, on $100 a week. And I bought it used; it had, like, 60,000 miles on it. I still have it today. It's one of those novelty items I'll never let go of because it signifies that I had made it out of where I came from. Literally, I was that guy who was rolling pennies to survive, and when I bought that car it was just one of the greatest days of my life—not because it was a car, it was just because I had worked so hard and I had pulled myself up by my bootstraps and scraped and scratched and did everything you do in life and was able to buy this Porsche, which was not even in my wildest dreams.

Margulies: The first luxury item I bought with my first paycheck from acting was good hair conditioner!

Back Stage: It's our 50th anniversary. What was the smartest thing you've ever done to ensure that you're going to be in business for a long time?

McDermott: My philosophy in life has always been "slow and steady wins the race." I think that, for me, the craft of acting always came first. I never became an actor to be a millionaire or to be famous or to be on magazine covers. I went into it because I truly, truly loved it, as I do today. And I always maintained that philosophy throughout my career, that once I didn't love it I would stop it. And I've never lost it. I've gone up and down, but I've never lost the love of it, and I think that has always kept me even-keeled. When I get into any kind of tailspin, I just go back to the work. And I think that's probably from my acting teacher, Sandy [Sanford] Meisner and the Neighborhood Playhouse, that taught me that—ingrained in me, instilled in me—the craft of acting is the most important thing, and all the other stuff is just smoke and mirrors.