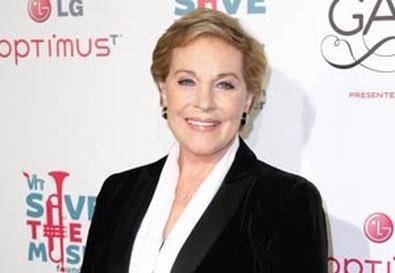 Photo Source: Getty Images
More than six decades after her professional debut in 1947, Julie Andrews remains popular with all generations. She cut her performing teeth in her native England, appearing in concerts and vaudeville and on radio programs, becoming widely renowned for a unique voice that spanned four octaves. She went on to stardom in films, theater, television, and recordings. On May 2, the Geffen Playhouse in Los Angeles will honor Andrews, as well as Creative Artists Agency, in Backstage at the Geffen, a fundraiser where Andrews will receive the Geffen's Distinction in Theater Award. The gracious entertainer recently shared with Back Stage recollections from her career and lessons she has learned in her remarkable creative journey.

Back Stage: You've had such a diverse career, gathering so many accolades. When you were a young performer in England, did you aspire to some of the things that were to come?

Julie Andrews: I think the things that happened were mostly beyond my wildest dreams. Who could have imagined that life would have taken such marvelous twists and turns or that I would often be so fortunate to be in the right place at the right time? Performing is always a learning process, even today.

Back Stage: What in your early training prepared you for the opportunities?

Andrews: I'm never sure one is exactly ready. You jump in, with both feet, into a very big fish pond. But I think the early years were all about beginning to learn some disciplines. When you are traveling in vaudeville, you experience so many different kinds of audiences, depending on what time of the week it is, how long the pubs have been open, and things like that. But it wasn't until years later that I discovered what a great foundation I had. It certainly enabled me to get up and sing on a stage. That's what I was primarily known for in those days.

Back Stage: What would you consider your biggest career breakthroughs—in the early years and beyond?

Andrews: In the beginning, there are three main steppingstones that I remember very clearly. One was when I was 12 and made what I would call my official debut. I sang one song in a musical revue in London. At almost the last minute, I was nearly dismissed because they felt that in such a sophisticated setting, this little girl with a freak voice was much too innocent. My parents and an agent or two descended on the poor producers. They said, "You've got to give this girl a break, and she'll sing something more difficult." And that night, I did in fact stop the show, and the audience wouldn't stop applauding. That was the beginning of some recognition of this sort of child prodigy that I was for several years. The next thing was going on to Broadway [starring in "The Boy Friend," in 1954, at 18]. I had toured around England endlessly throughout my teens, but when I came to the U.S. to perform on Broadway, that was a huge step. Then, obviously, going to Hollywood after a long period on Broadway.

Back Stage: Which career accomplishments stand out in your memory as your most rewarding work?

Andrews: There is so much that was fulfilling. Obviously, "My Fair Lady," and right after that, "Camelot," which was such a great joy. I mean, how lucky can a girl get to work with first Rex Harrison, then Richard Burton, and get to watch and study them? And then the break when Walt Disney offered me "Mary Poppins" and that film being so successful. Then that was followed very closely by "The Sound of Music." Then later down the line were the projects I did with Blake Edwards [the writer-director and her late husband], who saw other aspects to my character that could be brought out.

Back Stage: You did a lot of work with Mr. Edwards—many films plus the stage adaptation of "Victor/Victoria." Is it a challenge working with a spouse?

Andrews: (laughing) Yes, and some unusual ones, as when he assumed that since he knew me so well, he didn't need to work with me. We kind of talked shorthand. And I kept thinking, "Yes, I'm an actress too. I'd like some input here." But of course I was able to eventually get it. Also, there's always a slight silly drawback if you're doing a love scene with someone and your husband says, "It's lovely, darling, but I know you can do it better." That makes you feel a little foolish. But working with him, I always felt very, very protected, that I would be safe in whatever I did.

Back Stage: Regarding "Victor/Victoria," it's an unusual opportunity for a performer to repeat a film role onstage. What was the experience like?

Andrews: It was lovely. We got to flesh things out a lot. For instance, there was a phenomenal tango between two women, when my character is pretending to be a guy. It was so good, we wished it had been thought of before.

Back Stage: Besides Mr. Edwards, who are other people who helped you a lot in your career?

Andrews: Lerner and Loewe, and Moss Hart. Also, Rodgers and Hammerstein were extremely generous and kind and wrote the televised "Cinderella" musical for me. And then directors like George Roy Hill and Robert Wise. Someone else who had a huge influence on me was Michael Kidd, the choreographer. He and his wife were great friends of Blake's and mine, and he did many kindnesses and guided me often.

Back Stage: You made your directing debut a few years ago with "The Boy Friend." Would you like to do more directing?

Andrews: Yes, I absolutely loved it. I find it's a lovely way of giving back to some extent, and it's very stimulating. I've got a piece—one of the [children's] books I wrote with my daughter [Emma Walton Hamilton] is being developed for the theater, and I'm hoping I get to direct it. It's called "The Great American Mousical." It's being developed by the Goodspeed Opera House, and we would hopefully debut late this year.

Back Stage: Is there a message you could provide to performers about forging a successful career?

Andrews: Hopefully, there will be phenomenal opportunities crossing under young actors' noses as the years go by. You really have to be passionate about what you're doing, and you better be ready and do your homework. You never stop doing that. You never know when you will stumble across those wonderful moments of opportunity, like I was so fortunate to do.