Julio Torres Is Changing the ‘Shape’ of Comedy 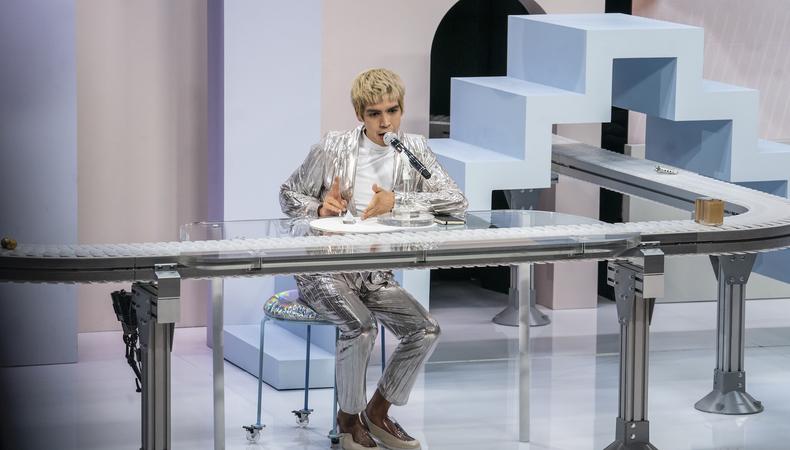 Julio Torres likens his new HBO special, “My Favorite Shapes,” to getting a haircut. “You don’t know the steps,” he says. “Ideally, you don’t even notice, but it flows in a way that doesn’t feel like a car, starting and stopping, starting and stopping…. And then at the end, you’re either like, ‘Oh, I like this,’ or ‘Oh wow, I hate this,’ but it is a haircut.”

Torres is well aware some people might very well hate his niche brand of comedy—he even says so in his special—but for those paying a bit of attention, his knack for distilling both the absurd joy and inane melancholy of life itself is undisputedly impressive. Take, for example, the introduction of a porcupine who has removed his quills in order to not hurt his lover, but now doesn’t recognize himself when he looks in the mirror. Or the cactus (voiced by Lin Manuel Miranda) who’s been planted in the same vessel that housed another, now-dead cactus, and is having an existential crisis. Or the oversized stiletto-shaped shoe case (voiced by Emma Stone) whose only purpose is to function as a display for smaller high-heeled shoes.

Ensconced by a conveyor belt for the majority of his show, Torres sits like a strange prince receiving his Earthly subjects as they turn the corner: first an oval who wants to be a circle, then an hourglass that tells people in Tilda Swinton’s apartment when it’s time to leave, then a tiny chair big enough to hold a chunk of rose quartz. “I don’t know if crystals actually work,” he muses, “but just in case, I got them all chairs and little desks so they don’t have an excuse.”

The set, co-designed by his mother Tita and sister Marta, is a work of austere, minimalist art that allows the audience to focus on the massive screen behind him, used to project a close look at the shapes his glitter-covered hands are presenting.

“The biggest challenge was curating the order of things,” he says. “I was very hung up on the idea of making it feel like it wasn’t randomized, but rather that it flowed in a way that felt satisfying. I was very hung up on that for the last month leading up to the special. But the pieces of it, the material, wasn’t a problem.” Rather than setting out with an intention to make a show about objects, he explains, he instead looked around his apartment and imagined what it would be like if everything in it was part of a show. And if each thing had a story to tell, ostensibly it was his job to relay it to us.

Originally from El Salvador, Torres emigrated to the U.S. as a student and began working the comedy circuit in New York City. “I started doing standup because I didn’t need anyone’s permission to do it, or didn’t need to spend any money to do it, didn’t need any training or to know anyone,” he says. “I just went to an open mic and took it from there, and then I would make little YouTube videos that got like, 10 views or something like that—just the exercise of doing something that you love and something that energizes you and stimulates you. I think too many people maybe start doing writing or performing with the questions, ‘Well, how do I get an agent? How do I get a manager?’ etcetera, and I truly had no idea what any of those things were when I started doing comedy because it was more about something that I wanted to do.”

Torres has been able to channel that happiness not only into his special, which premieres Aug. 10, but into another HBO gem, the Spanish-language “Los Espookys.” He co-wrote the first season, about a motley crew of horror enthusiasts who turn their proclivities into a business, with Ana Fabrega, a comedian he met working NYC’s comedy holes, and Fred Armisen. The show offered him an opportunity to act, as well, starring as Andrés, the “gothic little prince,” as Torres describes him, of a chocolate empire.

“I was very self-conscious about it because prior to Andrés, I’ve had just a small handful of very, very small parts here and there, and I was like, ‘Who the hell do I think I—like, why wasn’t it enough for me to write the show? Why did I have to be in it?’ There are a lot of similarities [between me and the character], there’s definitely a lot of overlap, but I was happy to find a part of me that is like a very difficult robot. Just very utterly unflexible.”

His recent successes have left Torres excited about what’s to come, and the feeling amongst his fans is mutual. By the end of anything the out-of-this-world comedian has touched, it’s clear his new U.S. visa status is spot-on: he’s nothing if not an Alien of Extraordinary Ability.

Briana Rodriguez
Briana is the Editor-in-Chief at Backstage. She oversees editorial operations and covers all things film and television. She's interested in stories about the creative process as experienced by women, people of color, and other marginalized communities. You can find her on Twitter @brirodriguez and on Instagram @thebrianarodriguez
END_OF_DOCUMENT_TOKEN_TO_BE_REPLACED