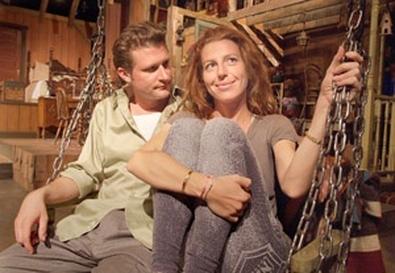 Photo Source: Ed Krieger
Playwright Henry Jaglom's homage to theater people is populated with a host of eccentric but lovable characters that bring to mind Kaufman and Hart's "You Can't Take It With You." Though Jaglom's work contains a number of inside jokes, there are plenty of one-liners certain to tickle general audiences. Director Gary Imhoff establishes just the right balance between the comedic and the serious elements, as, underneath the humor, Jaglom is exploring the contrast between the artistic life and the conventional existence.

The story centers on a family of actors who have seen better days living in upstate New York. The father (Jack Heller) is descended from pillars of the Yiddish theater but long ago transitioned to the English-speaking stage. His wife (Diane Salinger), is part-Jewish, part-Italian, with a little Chickasaw in the mix, and is something of a mystic. Her brother (David Proval) is temporarily staying at their home while playing a small role in a nearby dinner-theater production of "Guys and Dolls." The household also includes an aging character actor (Harriet Schock).

The couple's younger daughter (Tanna Frederick) has come home to recuperate from a failed love affair. Though she adores the life she has led in show business, her elder sister (Julie Davis) resents having been put on the stage as a child and so she left home to pursue a more traditional profession. When she brings her "civilian" fiancé (David Garver), to meet her family, he and the younger daughter find themselves powerfully attracted to each other, as the proceedings take unexpected twists and turns.

Though this is an ensemble piece, some of the work warrants particular mention. Heller projects an aura of authority, with a commanding presence that dominates the action, and Frederick moves effortlessly through an array of emotions. She and Garver, who exudes a quiet magnetism, engender a palpable chemistry together. Proval is hilarious and at times oddly touching. The remainder of the cast members acquit themselves admirably. The overall effect is greatly enhanced by Joel Daavid's impressive set design.