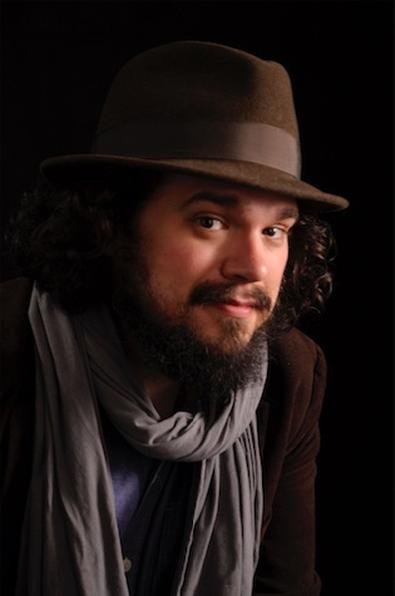 If you’re a theater lover living in New York City, you’ve probably heard of Justin Sayre. The writer and performer has become a lower Manhattan regular with his hit variety show, “The Meeting,” at Joe’s Pub, which he’s also taken out west while living in Los Angeles writing for “2 Broke Girls.” This weekend marked another career highlight with his La Mama debut: a sold-out opening of his one-person show, “Love’s Refrain.” It wraps its six-night run April 8, 9, and 10. The multi-hyphenate entertainer spoke with Backstage about being vulnerable onstage, writing for other actors, and working in Los Angeles.

On ‘Love’s Refrain.’
“It traces the life cycle of stars from how they’re kind of formed from nebula all the way to supernova. And it uses the science and the understanding of fusion and life cycles within them to trace my own understanding of love in my life. So it melds together these personal stories about my ups and downs in relationships and love, and puts them into this context of stars. It’s probably the most personal thing I’ve ever written. There’s a lot of things I’ve never talked about onstage—I never really thought I would. But the piece evolved out of this place of wanting to be more vulnerable, wanting to kind of have a moment where I put some of my own history to rest. And having the stars as a landscape to do that really gave me access to places I hadn’t been yet.”

On making astrology accessible.
“I’m not a science-minded person, so learning about the science of it, learning about fusion and all that, was really a new venture. Rather than get lost in the science speak of it, I wanted to create a poetic language around how stars are made and formed and live so that it will be accessible and it would translate as it goes back and forth into stories from my life. When you talk about fusion, you talk about binding, and you talk about the creation of life from that—it all kind of metaphorically made sense.”

On writing for ‘2 Broke Girls.’
“While I love performing and I love being up there, I also really like having other actors read my words. You’re always open to magic in that way. Somebody could come in and do a reading of lines that you wrote and there’s just something unique about them and something so foreign about them and they take a character that you wrote one way in a completely different direction that’s new and exciting. As a writer for the theater and as a writer for television and film, those are really always such exciting moments that if I was just writing for myself all the time, I wouldn’t get to experience.”

On theater-making in Los Angeles.
“Oftentimes, [theater in L.A.] is given a bad rap, but in New York, it’s so hard to get anything done because all the confines that make the city really tough for artists and actors alike trickle down into the creation of new art. It’s always difficult to get something off of its feet here. But in L.A., there is such a sense of, ‘We can do this. We can figure it out. We have the space. We have things to do.’ And there is such a can-do kind of spirit out there. They really end up doing a lot of cool stuff and a lot of experimental stuff that there has been in New York, there still is in New York; but in L.A., there is a quest for that and there is more availability for them to do stuff like that. It’s really nice being a bi-coastal artist where I get to create things in both cities and still feel like I’m creating something at home.”

On lessons learned from the solo show.
“I think that when you’re doing a project like this that is one person, you have to start from a place of trust. I think a lot of people when they go into a performance like this kind of muddy the waters. Like, ‘I’m gonna do a bunch of voices and I’m gonna do a bunch of tricks and I’m gonna do a tumbling section in the middle!’ The actual truth of it is you need to do the opposite. You need to strip away. It is unbelievably powerful to stand on a stage, still and silent, and then begin. I think that if you’re going to venture into doing a project like this, you have to give yourself those moments of standing and being with people. It is incredibly powerful to stand up there and say, ‘This is my truth,’ and not crowd it with any kind of magic beyond that. That in itself is such a piece of magic.”

Benjamin Lindsay
Benjamin Lindsay is managing editor at Backstage, where if you’re reading it in our magazine, he’s written or edited it first. He’s also producer and host of a number of our digital interview series, including our inaugural on-camera segment, Backstage Live.
END_OF_DOCUMENT_TOKEN_TO_BE_REPLACED