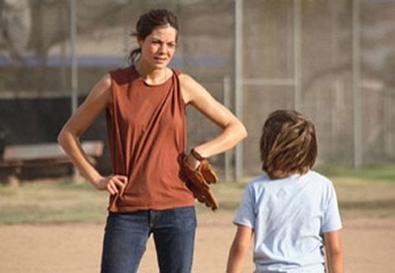 When Michelle Monaghan was sent the script for "Trucker" by writer-director James Mottern, she knew she had found, in her words, "the role of a lifetime." The actor, whose credits include the action comedy "Kiss Kiss Bang Bang" and the thriller "Gone Baby Gone," is earning some of the best reviews of her career. No less than Roger Ebert called her work in the film a "career-changing performance" and stated, "Her performance clearly deserves an Oscar nomination."

Monaghan was instantly drawn to the role of free-spirited truck driver Diane Ford, who is forced to reconnect with her 11-year-old son when his father becomes ill. "I was so shocked this was written by a man, that a man could tap into a female and have her play what is sort of a stereotypically man's role, professionally and personally, but also make her feminine," Monaghan says. "She's not a victim, which was a huge thing for me."

The film was shot on a budget of $1.5 million over the course of 19 days, with little time for rehearsal. But Monaghan made time to rehearse a pivotal scene with Jimmy Bennett, the young actor playing her son. "He's amazing; his résumé is longer than mine," she says with a laugh. "I never thought of him as a kid. I thought of him as one of the best actors I've worked with." She also took the time to go on rides with female drivers and attend truck-driving school. Anytime Diane is seen trucking onscreen, Monaghan is doing the driving. "If I can do it, anybody can do it," the actor notes. "I still have yet to learn how to drive a five-speed. It's pathetic."

And while the rave reviews are a nice bonus, Monaghan has been proud of her passion project from the beginning. "There's a particular point in the script where you could be very sentimental or melodramatic, and it was really refreshing to see a writer-director not go there," she says. "I was really inspired from the moment I read it."