Keeping Up With Alexander 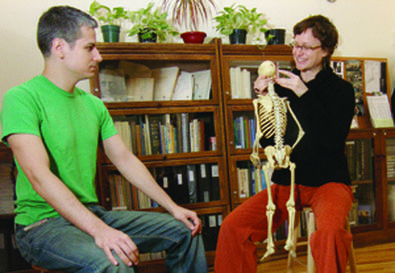 It was a fateful night in 1888 when Frederick Matthias Alexander experienced the actor's ultimate nightmare. Having garnered a reputation for stirring Shakespeare recitations—a popular form of theatrical entertainment during that era—the Australian actor completely lost his voice in the middle of a performance. He had been having severe vocal difficulties for a while and was getting nothing more than temporary relief from conventional medical treatments. So the day after that fiasco, out of personal necessity, Alexander embarked on the prolonged period of self-study out of which emerged the groundbreaking technique that bears his name.

Though he began by observing what he was doing with his body and how it interfered with his speech, he eventually branched out into exploring all kinds of movement habits that prohibit the optimal use of one's body. Alexander's discoveries resulted in a technique of physical re-education that helps people identify and eliminate tension habits so as to allow for the natural efficiency of both movement and voice.

The benefits of the Alexander technique are widely known to actors, singers, and dancers, yet unlike yoga and other forms of body-mind therapy, it has never enjoyed widespread popularity with the general public. That is, until now. Back Stage recently spoke with Alexander technique teachers in New York and Los Angeles and learned that the work has become of interest to scientists, is being applied to chronic-pain patients, and has been adopted by a diverse group of practitioners who are realizing that it can assist in everything from Alpine skiing to brain surgery.

"The Alexander community is really excited right now about the increasing number of neuroscientists who are starting to look at how the Alexander technique fits in with neurology," says Amira Glaser, a private Alexander instructor based in New York. "At the most recent international congress of Alexander teachers, which met in Switzerland last summer, there were so many panels focusing on the science and neuroanatomy of the technique—really looking at what's happening in the brain when we do the Alexander work."

The technique's basic concepts of awareness and inhibition, and its use of imagery and thought processes to change physical behaviors, are clearly rooted in the connections between the mind and body. However, Alexander had no medical training, and the validity of his work has been based largely on intuition and anecdotal evidence. But now a growing body of scientific research is showing how well-aligned the Alexander technique is with solid neurological principles.

"Because the Alexander technique is not about what we do but about how we do it, it combines really well with other fields of expertise," says Glaser, who is currently in a graduate program studying East Asian medicine. "What I've been noticing lately is a lot of little offshoots of the technique, being developed by people who are combining Alexander with other kinds of work outside of the performing arts. For example, there's a man based in New Zealand who has been working with the Alexander technique and eyesight and has had amazing results in restoring people's natural vision."

The Art of Breathing

But Glaser identifies the work of Jessica Wolf as the new Alexander application most relevant to performing artists. A faculty member and head of the Alexander program at the Yale School of Drama, Wolf has developed The Art of Breathing, a program for instructors already certified to teach Alexander.

"It looks at the breathing mechanism, how we use the breath in our bodies and voice, through an Alexander technique–based lens," explains Glaser, who has taken Wolf's course and is now applying those teachings to her own work. "What I have discovered in just the last six to eight months with my students is that when you can access that freedom of the breath, you are accessing yourself at a much deeper level. And for performers, to be able to access your emotions that deeply and then be able to communicate with them, that is ultimately what we're striving to do. Sometimes it's a little scary to feel all of that, but it is very powerful. It is no coincidence that in the early phases of his investigations, Alexander called his work 'the art of breathing.' "

Aside from actors, the other major population Glaser teaches is people in chronic pain. "Though the technique has traditionally been known among performers," she says, "nowadays I'm getting more referrals and calls from people with chronic back pain and neck pain—people who either don't want to have surgery or whom surgery can't help. I think they are the largest growing population that's studying the technique."

Glaser has found that the new breathing work she has added to her teaching is especially beneficial for this population. "Particularly for upper back, shoulder, and neck pain," she says. "Because the lungs are housed in the back of our bodies, when the breath starts to move more freely, it seems to really help people open up that shoulder and neck area." She also points out that interest in Alexander work is spreading in the medical community: "For example, there is a program at a hospital in New York that is exploring all kinds of alternative modes in the treatment of Parkinson's disease patients, and one of the things they are trying is Alexander technique."

Glaser sees the increased application of Alexander to various health problems as part of a general trend of "people wanting to get more in charge of their own health." Because it requires concentrated study, Alexander work "is not for people who want a quick fix," she emphasizes, "but for people who really want to engage in the process of their own wellness."

Though she had been exposed to the Alexander technique as an undergraduate performing-arts student at Sarah Lawrence College, what really fueled Glaser's desire to teach the work was a personal experience with back pain. "One day while I was traveling abroad, I threw my back out," she says. "I was in a remote area of France, and I didn't speak any French, so I used what I knew of Alexander technique to help me get through the pain and to heal. I really felt like I knew what to do and how not to aggravate it. It was that experience that got me excited about the idea of becoming an Alexander teacher."

Sharon Jakubecy is a Los Angeles–based Alexander teacher, as well as the media spokeswoman for the American Society for the Alexander Technique, the nation's largest professional certifying organization for Alexander technique teachers. She too has been noticing an increased interest in the study of Alexander work.

"What I'm seeing is people applying Alexander technique to their passions," Jakubecy says. "For example, I know of one teacher who teaches it in relationship to Alpine skiing, and another who applies it to swimming. And there's a teacher in Canada who focuses on Alexander technique and running. In Ohio, there's a woman who is looking at how the Alexander technique may help the efficacy of surgeons. Of course, there are a lot of teachers who use the work to teach singing, and within the acting community there are now teachers—one is in South Carolina—who are hooking up with Linklater voice instructors and teaching Alexander and Linklater work together." She's referring to Kristin Linklater's influential method of voice training for actors, which, like Alexander, is grounded in the idea of freeing up the natural vocal mechanism.

Jakubecy teaches mainly performers and public speakers, working with them on making direct connections between Alexander work and what they do in auditions and presentations.

"It's all about application," she says. "If you understand the work but can't apply it to what you want to do, it's not very useful. For example, when I teach, it's 'Okay, we'll do some floor work, some hands-on guidance, some identify and release tension, but now let's have you stand up and do a monologue.' At the very beginning of a monologue, a performer's habits jump in right away, so as soon as they go up on stage, I'll ask them what they notice. They might notice that they're locking their legs, or their lower back, or their chest—and that's before they even begin speaking. Then at the next class, I'll have them say just the first line of the monologue and notice what they do when they're getting ready to speak. Do they gasp for breath? Lift their chin? Tighten their neck? Then I give them guidance regarding how to undo all of those inhibiting habits—'un-getting ready,' so to speak. That's one of my favorite terms. I teach actors how to 'un-get ready.' "

Jakubecy thinks the growing interest in Alexander work stems from an August 2008 article in the British Medical Journal reporting the results of a study that had been done in England on the relationship between back pain and the Alexander technique. It compared the effectiveness of Alexander, exercise (in the form of walking), and massage in the relief of generalized lower back pain, and Alexander was found to be the most effective of the three. Patients who had 24 Alexander technique lessons experienced 85 percent fewer days of pain in a month than the control group. "So with the publication of that study, more people started seeking out Alexander technique for back pain relief," Jakubecy says.

Another reason for the growing popularity, she adds, is the concerted effort by Alexander teachers to reach out to the larger population. "There are many more teachers now on Twitter and Facebook," she says. "A lot of teachers are very passionate about the benefits of the work and are using all kinds of social media to spread the word."

Leland Vall, an Alexander teacher in New York, credits the English pop singer Victoria Beckham for some of the technique's increased popularity. It was reported last December that the former Spice Girl had taken up the study of Alexander to prevent the development of a hunched back as she got older, and her progress and testimonials about its effectiveness were widely discussed.

Regardless of its growing popularity in new segments of the population, Vall feels that Alexander work is still essential to the training of performing artists, particularly actors. "The Alexander technique grounds you," he explains. "It gives you a place to start. It allows you to stand up and speak clearly. And it links all of your other training, so you can make clear, effective use of everything else that you've learned. The Alexander technique helps you become aware of unnecessary things you may be doing that specifically relate to the narrowing or shortening of the body. It helps you to see those things and stop doing them. And it gives you a way of solving movement and speaking problems without the use of excess tension."

However, one's success with the Alexander technique depends upon "your willingness to make new choices," Vall stresses. "If you're very satisfied with yourself, it can be hard. But if you're interested in personal growth and looking to make changes, it can be highly effective and very easy."