Christopher Fitzgerald's Tips for Keeping a Performance Fresh After 600 Shows 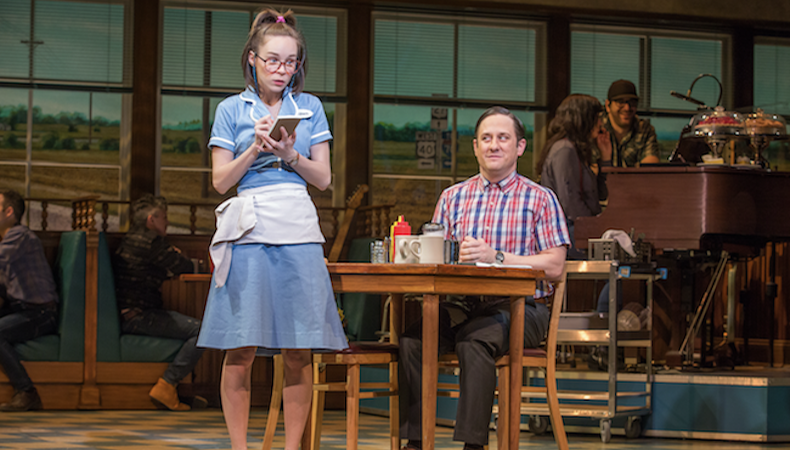 For over 600 performances, Christopher Fitzgerald has been Broadway’s liveliest actor as the affably earnest Ogie in “Waitress.” Lucky for us, the three-time Tony nominee also brought that energy to the small screen with memorable supporting turns on Netflix’s “Godless” and Syfy’s “Happy!,” which wrapped Season 1 Jan. 31. Fitzgerald sat with us to chat about playing demented children’s show host Sonny Shine and to reveal how he rides the natural highs and lows of an acting career.

He relishes the different challenges of Broadway and television.
“What’s really fun is to use different skills in different ways. What’s been interesting about these other projects this year is the characters were so different from what I was doing in ‘Waitress.’ Also, just performing something over and over again eight times a week in a Broadway show takes an entirely different set of skills than trying to kind of be present to capture a moment in a scene for film or TV where you’re trying to get the best, most dropped-in take that you can get. Whereas ‘Waitress’ and Broadway is a skill of repeating something but keeping it spontaneous, keeping it alive and fresh for the audience, for yourself. It’s fun to play in both worlds.”

He credits the ‘Waitress’ cast with keeping him on his toes.
“It’s about your mates, who you’re working with. And Caitlin Houlahan, whom I play opposite, she and I are just really good buds and we share a similar sense of humor, so we always are able to check in with each other and just play it. That, combined with an audience [for] the material, [the stamina] kind of takes care of itself. But I’m not gonna lie and say, ‘Every time it’s magic!’ No, sometimes it’s work. It’s like any job.”

On his Sonny surprise.
“[‘Happy!’] starts [with] this crazy children’s performer, he’s world-famous, [and] it’s one of his concerts. That’s where this little girl gets abducted by an evil Santa—are you wanting to tune in already?—and this director [Brian Taylor told me], ‘Just go crazy.’ It was in front of 300 people down at city hall, and I had to juggle and balance things and he was just like, ‘Just go nuts, do whatever you want to do.’ And then as they were developing the show, they found a place for this character to continue. It truly is deranged, but really in a fun way. It hurts, but it’s a good kind of hurt.”

Invest in your life outside of acting.
“Find the things that you are invested in: my family, my friends. Those things really have actual value, and it’s not to say that acting or performing or getting a Tony nomination isn’t of value, but it has its place in your real story, and I feel like you’ve gotta keep that stuff as your rock. We lack so much control. You just don’t know what your story’s going to be.”

Benjamin Lindsay
Benjamin Lindsay is managing editor at Backstage, where if you’re reading it in our magazine, he’s written or edited it first. He’s also producer and host of a number of our digital interview series, including our inaugural on-camera segment, Backstage Live.
END_OF_DOCUMENT_TOKEN_TO_BE_REPLACED