For Kendall Cornell, Clowning Is a Woman's Business 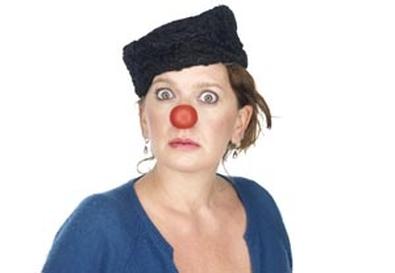 Sporting red clown noses and an array of quirky hats and eccentric costumes, the nine clowning women who make up Clowns Ex Machina raise lofty questions about art, commerce, and beauty while rendering such a heady discussion absurd. With squeals, grunts, calisthenic moves, and zany audience interaction, the all-distaff troupe employs such iconic images as Andrew Wyeth's "Christina's World" and the drowning scene in "A Place in the Sun" as vehicles for pointed and hilarious comedy about women's sense of self and the society that informs those views. The most brutal and entertaining send-up features ballet dancers in all their daintiness, fluttering and twirling about. But in this wonderfully twisted vision, plastic nipples are prominently displayed at breast level atop the dancers' leotards, with one ballerina's nipples totally asymmetrical, as is her butt. Now celebrating its fifth year on the scene, Clowns Ex Machina is premiering its latest and fourth full-length multimedia work, "Clowns Full-Tilt: A Musing on Aesthetics," at Off-Broadway's legendary La MaMa theater.

Although women clowns have existed throughout the ages, Ex Machina is anomalous, says Kendall Cornell, who heads the company. Indeed, she suggests it may be one of the few, if not the only, all-woman clown companies of its size performing anywhere. Traditions and self-imposed restrictions die hard for women.

"Clowning is physical, openhearted, and revealing," Cornell says. "Being unselfconscious in a physical way could be more challenging for women." Yet Cornell balks at the idea that women have additional obstacles as clowns because they're not naturally funny. It's a cliché that has no traction.

Still, women clowns are going to explore different territory from their male counterparts, she points out, taking pride in the range of talents on display and the use of song, dance, and text in her shows. Male clowns may sing and dance, she acknowledges, but female voices and dances carry their own sensibility.

That female sensibility extends to their comedy as well, she says, offering examples. A woman clown cradling a trombone like a baby is different from a male clown performing the same act. For almost inexplicable, subtle reasons, the woman clown is probably funnier. Similarly, if male clowns do a riff on ballet, it becomes a commentary on masculinity versus femininity, delicacy versus klutziness. When a woman clown tackles ballet, the comedy shifts a little because women, unlike men, dream of being delicate and graceful. The contrast between fantasy and reality may bring another dimension to the comedy. "But I also have my own aesthetic," Cornell says. "It's sophisticated and intelligent as opposed to slapstick."

This fresh vision subtly reinterprets social assumptions and turns them on their head, and that's where the comedy lies. "Though the audience may not know exactly why they think it's funny," Cornell notes. "Men and women may have different experiences. Sometimes men are not sure they should be laughing. One guy told me he laughed and then wondered about it. Our clowning is layered. I don't like cheap laughs. I especially don't like women to sell themselves cheap. I like to shine a light on women in a certain way. I value their humor and unseen side. I'm interested in feminist issues. Is that a political statement? I don't know."

Brought up in Rockland County, N.Y., Cornell planned to be an actor. After graduating from Swarthmore with a degree in English and art history, she moved to New York to continue her studies in acting and dance. Along the way she found herself drawn to comic acting and attended a workshop on physical comedy given by clown David Shiner, perhaps best known for his collaboration with Bill Irwin on "Fool Moon."

"It changed my life," Cornell recalls. "It was the frying pan to the head. I knew this is what I wanted to do." Cornell went on to study with French clown teacher Philippe Gaulier, who champions playfulness and that elusive sense of complicity among the clowns onstage and with the audience, Cornell notes.

Cornell has been creating and performing clown work for 17 years. Her solo pieces have been presented at La MaMa, the N.Y. Clown Theatre Festival, Festival de Internacional Pallasses, Dixon Place, and the 92nd Street Y, among other venues in New York and abroad. Forging ensemble pieces is an especially complex process; it takes approximately a year and a half a show. "It's done in stages," she says. "We start from zero. It's an intense five-week rehearsal period, and then we separate for approximately three months before coming together again. But during that time I continue creating."

The company has employed more than 20 women clowns, who boast an amalgam of backgrounds in theater, dance, singing, and improvisation. Most are multidisciplinary, though one clown is a straight actor. "You need to be a good actor to be a good clown," Cornell says. "You need emotional access."

Cornell believes an influx of women in clowning is the logical evolution in an art form that could become stale. Women may bring just the right reviving freshness to the proceedings.

As an actor has appeared in plays with Waterline Theatre Company and in "Danny & the Deep Blue Sea" and "Miss Julie" with Moxie Productions, among others