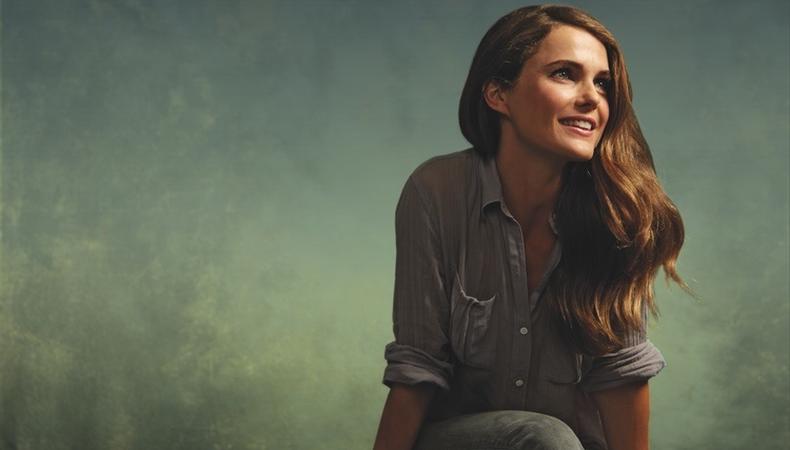 If any actor on a freshman drama seemed a lock for an Emmy nomination, it was Keri Russell for her work as Soviet agent Elizabeth on FX’s ’80s-set “The Americans.”

Sexy, tough, and committed to the cause, Elizabeth started the series as a true believer, while her fellow agent and husband, Philip, was more ambivalent. But as the season progressed and Elizabeth suffered betrayals both big and small that first pushed her closer to Philip and then tore them apart, Russell’s work became electric and heartbreaking.

When the Emmy nominations were announced, Russell’s name was left out.

So it is surprising when she brings them up while discussing her new romantic comedy “Austenland.” More surprising is that she brings it up in reference to the lack of a nom for her co-star, Matthew Rhys.

“He’s so crazy good in it,” she says, still shocked. “I can’t believe he didn’t get nominated!”

Emboldened by her introduction of the topic, we submit that she did some pretty crazy good work herself. She looks at us as if we’re just crazy.

“Seriously, I have, like, long hair and some eyeliner,” she says. “But it’s crazy what he does.”

When Rhys is informed of this over the phone later, he verbally rolls his eyes. “She does everything in her utmost power to deflect attention away from herself,” he says from England. “She is genuinely modest and humble. But you get to the point where someone that talented, you want to go, ‘Shut up.’ ” More seriously, Rhys calls her “everything you’d want in a leading lady” and adds, “I’ve never heard her complain, the entire six months, even when she was beaten black and blue. She leads from the very top. She sets the pace, the standards, and the on-set decorum. But she does have great moments of irreverence, and she enjoys a glass of wine—sometimes at the wrong time of the day, so you know she’s human.” 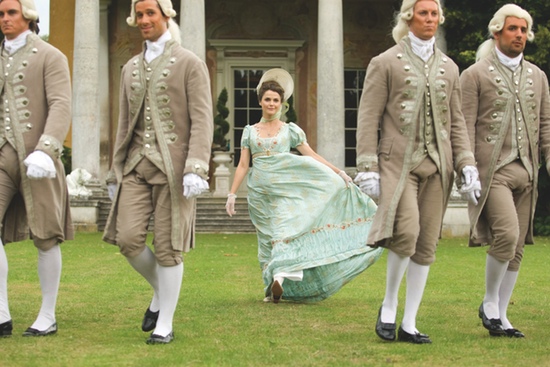 Very few actors manage to be both famous and exactly what you expect, and Russell is one of them. She’s game if tired (she wrapped her scenes on the upcoming “Dawn of the Planet of the Apes” mere days before), and eager to talk about her buzzy year and gush over her colleagues, including Rhys and the Emmy-nominated Margo Martindale. “I’m really enjoying myself in my career, I feel like for the first time, these last few years,” she says.

In the decade since her breakout series “Felicity” ended, Russell’s only high-profile lead roles have been in the indie film “Waitress” and the Fox sitcom “Running Wilde,” a flop co-starring Will Arnett. Then writer-director Jerusha Hess emailed her about “Austenland.”

A romantic comedy in which the lifelong Jane Austen obsession of a single woman culminates in an immersive vacation that re-creates Austen’s era—complete with a full complement of hunky servants and reserved gentlemen with whom to flirt—“Austenland” is a frothy bauble that avoids most of the current rom-com clichés.

“I just loved the premise,” Russell says. “The idea is hilarious—you pay all this money to go out and be romanced by actors and try to have sex with all of them. It’s poppy, it’s fun, it’s light. Sometimes you want to go to a movie and feel good and not want to slit your wrists.” That was enough to get her into the English country- side—and a corset—despite being pregnant.

Here again, Russell dismisses her own performance to praise a co-star. “JJ is really good in it,” she says. “In watching it, I thought he was really compelling. He certainly seemed like a better actor than me. I thought, Boy, I’m being really lazy in this movie. But he was really sharp and on top of it.”

She’s equally blasé about her performance on “The Americans,” which she can discuss with all the fervor and excitement of a fan. “Where is the series going to go? Is he ever going to pull her into considering defecting? I don’t know!” she says as talk turns to Elizabeth’s wavering faith in the Cause.

She has yet to see any scripts for the second season, though she jokes that hopefully Elizabeth spends a few episodes in a coma, so she can get some rest. She deserves it, after a season that saw her murdering people left and right and punching the hell out of Martindale—not to mention donning what seems like a wig an episode. What does she think when she reads the script every week?

“I just sort of laugh,” she says. “I go, ‘Oh, crap, I have to do that? Shit.’ As long as I don’t have to do monologues in Russian, which is my biggest fear. I have two children—you can’t expect me to do that! They gave the Welshman the Russian, so now I have to get beaten in my underwear and a wig.”

Hourlong dramas have notoriously lengthy working days (Russell estimates “The Americans” has a seven-day shoot per episode), so her return to TV was a bit of a surprise—especially to Russell. “I was surprised,” she says, laughing. “And I was surprised I liked it. And it was such a fun surprise that other people liked it.” Russell had some concerns about Elizabeth based on the pilot’s script (which focused more on Philip and left Russell little to play other than icy quiet), but she loves the way the human relationship at the story’s core has paid off. “Always, my favorite part of the show is the relationship,” she says. “The spy stuff is this weird fun fantasy part of it that allows the stakes to be high. But I love watching that relationship.”

Rooting for the success of a staged marriage between two Communists plotting to overthrow the American government is one of the major successes of “The Americans” and a reason why Russell was present during the hunt for a Philip. Without a perfect match for Russell, “The Americans” would be just another “Undercovers,” NBC’s 2010 fast fizzle of a married-spies show. “I probably sweat way more than they did,” Russell says of auditioning actors. “I wasn’t even on camera, and I was so nervous.”

Though the complicated and prickly Elizabeth has been a fan favorite, Russell is captivated by Philip. “I love that Elizabeth’s sort of a bad, unemotional mom,” she says. “Matthew’s character is so much more relatable, and it’s fun getting to be the one where you’re like, What is she doing? Love him already. He’s so nice to you.” When we say that we find Elizabeth more relatable, she seems shocked again that someone prefers her work to that of a co-star.

“Are you like, ‘Stop crying! Do your job already! Buck up! C’mon, why is she lifting that heavy box out of the woods alone?’ ” she asks before laughing and admitting, “She’s so strong! She has big muscles in that silk blouse. Silk blouse, gold chains, Jordache jeans, lovers on the side—she’s working it out!”