Kevin Bacon Loves the Stage -- And Not Just for Acting 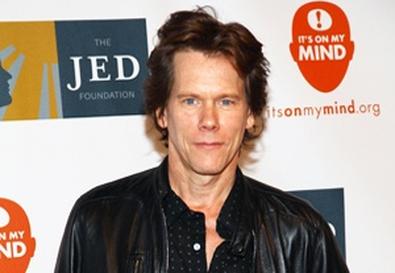 Photo Source: Astrid Stawiarz
ALEXANDRIA, Virginia (Reuters) – When he's far away from the bright lights of Hollywood, actor Kevin Bacon spends much of his time in second-rate hotels and hauling his own bags while trudging through airports.

And he wouldn't change it for anything.

For the last 14 years, the star of such movies as "Footloose" and "Apollo 13" has sung alongside his older brother Michael as a member of the Bacon Brothers, a six-member rock group that plays up to 60 shows a year.

"There's a lot of stuff you have to do that's not fun," Bacon told Reuters recently. "Getting places. Airports. You get there, you get the gear, you put the gear on the sidewalk. You stand around. You eat bad food. You stay in crappy hotels.

"The cliches of playing in a rock band are very applicable. There is a certain amount of drudgery.

"But the time that you get to play is still great. It's so much fun. Playing in a band is such a lucky thing to experience. To be able to share music is a rush," he said.

Bacon, who has made more than 40 movies, knew it was risky to become a singer in a rock band. But taking a chance is a fundamental part of living, he said, leaning back, stretching out, and locking his hands behind his head.

"There is a certain element of risk to it," the 51-year-old Bacon said about an actor who turns to music, a transition that usually raises eyebrows, elicits groans, and can do irreparable harm to a hard-earned reputation.

"I knew that going in. So what do you do? Do you say, 'Therefore I'm not going to do it?' Risk is really an essential part of being a creative person.

"If you're not risking, then sing karaoke. You have to be pushing yourself. Doing something outside your wheelhouse, that's what keeps you alive as a creative person," said Bacon who sings, plays guitar and percussion.

The band played recently at the 500-seat Birchmere, a club in suburban Washington. In the opening song of the two-hour set, Bacon delighted the audience with a rousing version of "Only A Good Woman," a single from their 1997 CD Forosoco.

Kevin and Michael Bacon come from humble roots and were encouraged as children to explore their artistic side.

"We always played music in our house. We grew up in a very skinny townhouse in the middle of downtown Philadelphia," said Michael, 60, an award-winning TV and film composer.

"Our parents were sort of hippies, even though there weren't hippies back then. They believed in creativity. Play an instrument, get acting lessons, paint, dance -- that's what they valued. And that's what they gave us."

The brothers began by writing country songs to pitch to other artists when a friend of Kevin's asked them to get a band together and play a show in Philadelphia.

"We just really enjoyed it," recalled Kevin, who is married to actress Kyra Sedgwick, star of TV crime show "The Closer."

"We've been following it ever since. There was never really any kind of master plan. We're just taking it one show, one record, one song at a time."

He concedes, however, that he would love the band to create a top-selling record.

"You'd have to live under a rock if you didn't want a hit record," he said. "You have the dreams that you put in the back of your mind. In your quiet moments, you can fantasize about things like hit records, stadiums, rock stardom."

Perhaps ironically, it's Kevin, despite his often hectic movie schedule, who is the more productive writer.

"He's a really interesting and talented songwriter with no training in music whatsoever," Michael said of his younger brother. "I have all the training.

"But Kevin has a wonderful way of communicating through songs. He has a need to do it. That's what I hear in the songwriting that he does."