Kevin Hart Pokes Fun at His Life in Standup Movie 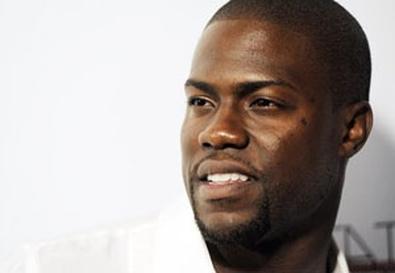 Photo Source: Chris Pizzello
ATLANTA (AP) — Kevin Hart remembered when he took the stage early in his career and told a joke so bad an audience member tossed a Buffalo-style chicken wing at him, slapping him on the cheek.

"It hit me right here, with the sauce dripping from my face," said the comedian, poking his cheek before pointing to the floor. "It was the worst. I wanted to step to the guy who threw it, but he was too big. You know, I'm a little guy. So, I wiped the chicken sauce off and tried to finish."

An embarrassing moment such as this might have forced any other amateur comedian into an early retirement. But Hart has found a way to craft his comedy act around his most shameful situations, turning them into laughable ones.

For Hart, it's therapy.

"That's my drug, to go on stage and show people what I'm going through," said Hart, whose first standup comedy movie "Laugh at My Pain" will premiere in 100 AMC theaters in the United States and in East and West Africa on Thursday.

Hart's "therapy" has made him one of the most in-demand comedians in the business right now. He's coming off a well-received appearance on the MTV Video Music Awards, where he delivered the opening monologue and starred in humorous vignettes during the show; he also hosted this year's BET Awards. Hart's profile has also risen thanks to a string of standup TV specials, including "Seriously Funny" in 2010, as well as a Ford Explorer commercial along with a couple of Air Jordan commercials alongside Miami Heat star Dwyane Wade.

With his new movie, Hart will become the first black comedian to have his standup performance showcased in movie theaters since Martin Lawrence's 2002 concert film, "Martin Lawrence Live: Runteldat." Hart will join an elite list of black comedians who have had their standup act shown on the big screen, including Richard Pryor, Eddie Murphy, Lawrence and the four comedians of the 2000 standup film, "The Original Kings of Comedy."

Some consider the 33-year-old Hart today's king of comedy.

"He is willing to share his life and experiences from his past," said Steve Harvey, one of the "Original Kings" who has given Hart advice through his career. Hart has appeared as a co-host on Harvey's nationally-syndicated radio program, "The Steve Harvey Morning Show" and will be in the upcoming film "Act Like A Lady, Think Like A Man," which is based on Harvey's best-selling book.

"Kevin is open about his relationship, his parenting skills and his childhood," he continues. "That's how you get an audience to identify. He's probably doing it better than anyone else right now. That's what I like about him."

In "Laugh at My Pain," Hart openly talks about at his father's drug addiction, pokes fun at how his family coped with the death of his mother, takes a jab at his 5-foot-5 height and discusses his legal separation from his wife Torre Hart, who is also a comedian. The movie also includes a touching moment when Hart visits his hometown in Philadelphia: He holds a family gathering and tears up while giving thanks to his aunt and others for supporting him after his mother died from cancer in 2007.

The film, co-directed by Hart, was filmed during his 90-city tour earlier this year. The tour grossed more than $15 million.

"I talk about the things people normally wouldn't laugh at," he said. "Those moments were tough. But you got to take your lumps. You don't have a success story without them."

Hart has used the Internet and social media to his advantage, occasionally responding to many of his 2 million-plus followers on Twitter, along with interactions on Facebook and live chat through the Web site Ustream. He also posted a few videos of his personal life that went viral — hanging out with Jermaine Durpi and Diddy, and playing a pickup basketball game against NBA player Shannon Brown.

"Visual media is huge," he said. "The Internet has taken such a hold on our society today. For our youth, that's how they operate. Television is going to get to the point where it's going to go through the Internet. So, I'm just trying to get my hand on it early."

Ultimately, Hart wants to build his brand beyond comedy. He's appeared in lead and cameo roles in more than 20 movies since 2002 with a resume that includes "Soul Plane," ''Fools Gold," ''Little Fockers" and "Death at a Funeral." Most have not received good reviews, but he looks at each role as an opportunity to enhance his likeability.

Hart isn't shy about letting people know he's made plenty of money during his career. But he also wants his career to be more than making the big bucks, looking to own his projects as a writer and producer like his idol Chris Rock.

"I'm a millionaire, but it's not enough," Hart said. "It's about owning. It's not about making the money. It's about what you do with the money once you have it. Chris Rock directs, writes, produces and stars in his projects. He creates because he wants to keep his brand going."

Hart has already made an impression as a business-minded entertainer. He met with AMC Theaters executives to help close the deal on his debut standup movie.

"You know the term showbiz? Well, Kevin knows how to go back and forth from the show and biz," said Jeff Clanagan, the CEO of Codeblack Entertainment, which produced and distributed "Laugh at My Pain." ''He's talented. We all know that. But he can also put on the CEO hat. There are not many people who can do the show and the business."

Outside of his comedy and acting endeavors, he is filming a documentary to explore the preparation of his comedy act, and has recently launched own mobile application, "Little Jumpman," a game that shows a character with the likeness of Hart jumping as high as he can to earn points. The comedian's YouTube video channel, Twitter and Facebook updates can also be accessed through the application.

"It's all about my long term goals," he said. "How do I become a mogul? The only way to do that is to constantly reinvent myself and invest in myself."