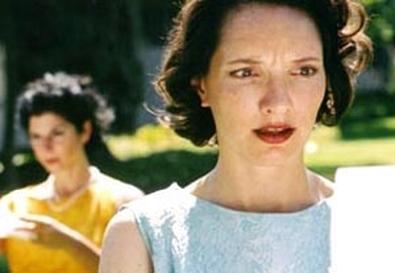 Dear Jackie:
Just read your column in the June 2 issue ("Kissing Caution"), about being asked to kiss your scene partner during an audition. I think you overlooked the obvious answer: Act! Instead of making it all about me, I'd claim concern for the other actor, as in: "Wow, I'm really sorry, but I'm just getting over some kind of flu bug and I'd hate to pass it on to someone else. I'm sure I'll be fully over it when you cast me, and I can really bring the heat then."

I've never had to kiss another actor at an audition, even at callbacks. Can you imagine? Four people called back for each role and you end up smooching by proxy with all of them? Most directors I've worked with even allow a "get to know each other" period before demanding intimacy in the rehearsal hall. I also think it's wise to be the first one to bring up the issue if you're reading sides with another actor. Try: "Let's not do the kiss, okay? Just an embrace or something. I'm just getting over a cold and I wouldn't want you to catch it. If they ask why we made the choice, I'll tell them why."
—Just Sayin', Blistex


Dear Jackie:
I am in a really expensive, very demanding scene study class with a well-respected teacher. Right now I am teamed up with another actor who's quite talented and actually pretty beloved by the teacher. Everything he does is gold, at least as far as the teacher seems to think. Whenever he presents a scene, the teacher praises him to high heaven and pretty much ignores the other actor.

I'm not really a jealous person, and this wouldn't usually bug me very much, but this actor is being really flaky about rehearsing. He's already canceled our rehearsals two times, and the one time we did meet he left after 45 minutes because he said he had other plans. I keep trying to be cool about it, but we have only two weeks to rehearse our scenes for this class, so we're pretty much out of time. I guess he isn't worried about getting grilled by the teacher since he's her pet, but I am! Also, I am really frustrated about not getting my money's worth for my work in the class. Is there anything I can do to fix this?
—Frustrated


Dear Frustrated:
It sounds like it's too late for me to help with your current rehearsal situation, which is headed—you guessed it—to the presentation of an ill-rehearsed scene for which your partner is praised and you are ignored.

For the sake of argument, however, is that really so bad? It's not unlike the proverbial "real world"—unfair! In the course of your career, you'll be paired up with all sorts of folks—flaky, driven, narcissistic, generous, and downright abusive. That's the nature of freelance work, especially for actors, and one of a working actor's skills needs to be navigating the tricky terrain of other performers. You need to be able to work with all sorts, in all sorts of situations. Use this situation to practice preparing a scene without a scene partner, something you will have to do in the future, especially if you go on to a film and television career. Prep your role meticulously with maximum flexibility, as your presentation is likely to be heavy on spontaneity. It's kind of like an improv scene with scripted dialogue. What a fun challenge!

Pollyannaish cheerleading aside, let's talk about what you could do differently if faced with this situation again. When dealing with flakes, I find it most helpful to set very clear boundaries. You can't force other people to work in the way you want, but you can make sure they don't assume you'll do things on their terms. Next time you're paired up with someone who seems less than motivated, try saying something like: "I am really serious about our scene but have a very demanding schedule. To make this work for both of us, let's set our rehearsal times now." Then schedule your meetings, including an emergency reschedule time in case "one of you" has to cancel. Your proactive scheduling should put your partner on notice. Then, when the flake inevitably flakes, resort to friendly but honest confrontation.

Most people avoid conflict, preferring instead to smooth over small issues, so most flakes get away with putting others out without fear of repercussion. When they are confronted, even politely, they often back down quickly. When someone flakes on you, calmly, quietly explain to that person that you are not comfortable with such behavior. Keep the focus on yourself, as in: "I am spending a lot of money on this class. I really need to make sure I'm getting the most out of it. Please don't skip any more rehearsals."

You didn't mention whether you choose your own scene partners in this class or the teacher pairs you up. If the latter, you might wait until this partnership is over, then tactfully approach the teacher and explain the situation. Don't "tattle" on your partner; instead, let your teacher know that you are really serious about your work in the class and feel like you can't get as much out of it as you'd like when working with this guy. That's probably enough to keep the teacher from pairing you up with him again. If the teacher excuses his behavior—or worse, suggests you deal with the flakiness to bask in his glory—you'll know it's time to find another class. From what you've said about the teacher's attitude toward this star pupil, it may be that time already.


Dear Jackie:
My college acting teacher said you should always memorize the material ahead of time for any audition you go to, so you can be totally prepared. Then I was in a workshop and the teacher said not to memorize stuff for auditions. This doesn't make sense. Why wouldn't you want to be prepared? Which advice is right?
—Memory


Dear Memory:
They are both right. Your college teacher was right to encourage you to prepare fully for audition opportunities; your workshop teacher was right to suggest that you don't overdo it. You wouldn't audition in full makeup and costume, would you? In a way, going in off-book indicates the same thing to the auditors, that they're watching you "perform" the scene. You want them to get the feeling that you're still discovering the material—that, while you are quite prepared, you are still flexible and unrehearsed. So do both.

Memorize the material but hold on to the sides. Glance at them a couple times during your reading, whether you need to or not. (This also avoids the nightmare situation of telling them you don't need the script and then having to call for a line.) If things go well, they'll be left saying, "Wow! Such a great interpretation! We can't wait to see what he does after he gets off-book!"

Do you have a question for The Working Actor? Click here to send your question today!